A cold reminder this week that spring has yet to spring 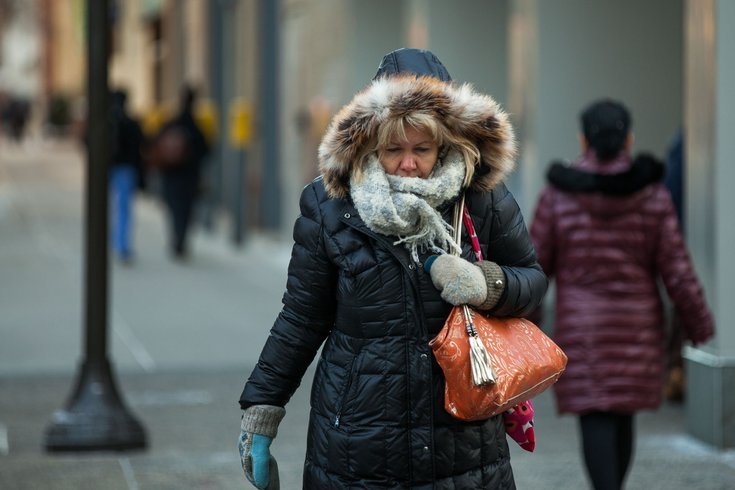 It's important to bundle up during cold weather.

If you brought your plants outside on Friday and Saturday, thinking the 80-degree temperatures meant springtime had finally bloomed, well not so fast.

You may want to bring them back inside before you go to bed Tuesday night. Or at least cover them.

A freeze warning is in effect from 2 to 8 a.m. Wednesday for much of the Philadelphia region, according to the National Weather Service.

From western Chester County to Eastern Montgomery County to Central Bucks County to South Jersey, low temperatures overnight are expected to drop to or near the freezing mark. The city was not included in the warning area.

Low temperatures will generally be in the mid 30s from the I-95 corridor south and east with upper 20s to low 30s farther north and west.

The record low for the day Wednesday is probably safe in Philadelphia (25 degrees, 1875) but the record at Wings Field in Blue Bell, Montgomery County (33 degrees, 1997) could be iced.

Frost and freeze conditions may damage sensitive vegetation, according to forecasters, who suggested taking steps to protect tender plants.

Meanwhile, widely scattered sprinkles and flurries are moving through southeast Pennsylvania on Tuesday afternoon, though most of the precipitation will not reach the ground as a result of dry air in the lower levels of the atmosphere, forecasters said.

The cool and breezy conditions continue into Tuesday night, with winds continuing to gust from 20 to 30 mph at times out of the west to northwest.

Wednesday should be dry, with temperatures lifting into the 50s and lower 60s.

Here is the weather service's 7-day forecast for Philadelphia:

Tuesday afternoon: A chance of showers, mainly after 5 p.m. Cloudy, with a high near 51. West wind around 17 mph, with gusts as high as 31 mph. Chance of precipitation is 30 percent.

Tuesday night: Cloudy, then gradually becoming partly cloudy, with a low around 36. West wind 13 to 15 mph.

Wednesday night: A chance of rain. Mostly cloudy, with a low around 49. Southwest wind around 5 mph becoming light and variable in the evening. Chance of precipitation is 50%.

Thursday: A chance of rain. Cloudy, with a high near 60. Light west wind increasing to 12 to 17 mph in the morning. Winds could gust as high as 31 mph. Chance of precipitation is 50 percent. New precipitation amounts of less than a tenth of an inch possible.

Thursday night: Mostly cloudy, with a low around 41.

Friday: Mostly sunny, with a high near 56.

Friday night: Partly cloudy, with a low around 40.

Saturday: Mostly sunny, with a high near 57.

Saturday night: Partly cloudy, with a low around 43.

Sunday: Mostly sunny, with a high near 61.

Sunday night: Partly cloudy, with a low around 44.

Monday: Mostly sunny, with a high near 63.