Last time is was Doug Pederson in the former GM's crosshairs. This time it was Nick Sirianni. Some people never learn... 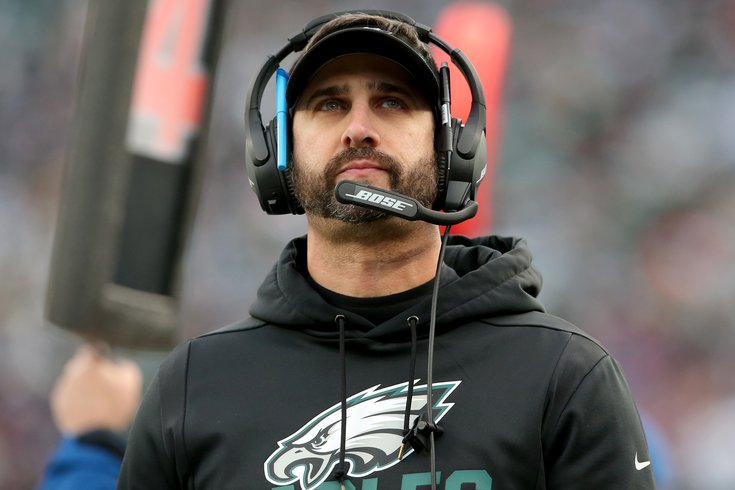 Of the seven head coaches hired during the 2021 offseason, only one made the playoffs in his first year at the helm. That would be Nick Sirianni of the Philadelphia Eagles.

When Sirianni was hired — or perhaps more accurately, after Sirianni's initial bumpy press conference — the Eagles were criticized for their choice. Somewhat surprisingly, after years of trying to wipe egg off of his face for his infamous over-the-top criticism of the Birds' hiring of Doug Pederson in 2016, former NFL GM Mike Lombardi joined in on the criticism, failing to learn a tough lesson in hot takes gone horribly wrong.

Back in January of 2021, appearing on Boston-area WEEI's Ordway, Merloni & Fauria show, Lombardi had this to say about Sirianni:

"I think it’s the Eagles’ mistake. They hired a guy who has never called plays. Never called plays. The Eagles are like a nostalgic tour band. They want to go and they want to hire someone who has reached that [2017 Super Bowl] season, and they can't get Frank Reich, so they'll take a coach who has been with Frank Reich. I think this is going to be a hard event."

To note, Frank Reich had seven players on his team make the Pro Bowl in 2021, and his team didn't make the playoffs.

When asked a question about Chiefs offensive coordinator Eric Bieniemy during his radio interview, Lombardi came right back to the Eagles' hiring of Sirianni, arguing that he was vastly inferior to another Eagles head coaching candidate, Josh McDaniels.

"There's no way Josh McDaniels in a room and Nick Sirianni is in the same room, and they're talking football, and you're gonna pick Nick over Josh. There's just no way. Like, it's just no way. It's not even close. I know Josh so well that his level is far exceeding most people, so you can't really predict what happens in that room."

Technically, Lombardi didn't come out and directly say that Sirianni was a bad hire, though certainly, he makes that implicitly clear.

In listening to the interview, it also feels a lot like Lombardi has never spoken at length with Sirianni in his life.