What they're saying: The most Eagles team ever? Kelce's last hoorah? How Birds can beat the Bucs, and more

Also, a look at how Tampa sees Philly ahead of Sunday's playoff game... 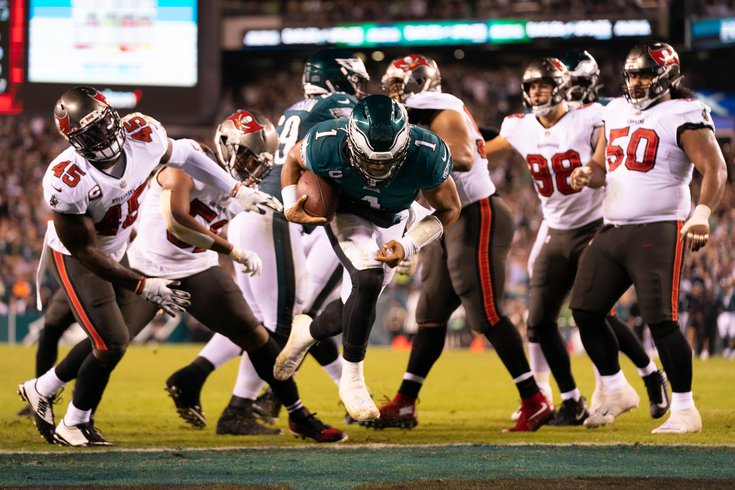 Jalen Hurts and his 10 rushing touchdowns are a major reason the Eagles are in the playoffs.

For the first time in a while, with the Eagles preparing for their Wild Card playoff date in Tampa, there seems to be a lack of a clear, prevailing narratives among the writers who cover the team and often do a lot of overlapping as far as storylines go.

After Week 18's meaningless, preseason-style game, there is quite a bit of variety in Eagles content in the lead-up to Sunday afternoon, which is kind of cool. Some are saying the Eagles must win to validate their season (like our Eytan Shander), while others are saying it is a success for the team just to be invited to the postseason tournament.

Can the Eagles run the ball against Tampa and win? Can they slow down Tom Brady? Is relishing the three draft picks coming the Birds' way, one of them better than expected after Carson Wentz's epic collapse, good enough to make a potential playoff loss more palatable?

Whatever thoughts you've got taking up the Eagles-loving part of your brain, there's probably some content for it. As we often do, we've scoured the web for some of the best takes or stories about Philadelphia over the last few days, and with a lack of a clear theme this week, we'll simply present this as our Wild Card playoff round edition.

Here's what they're saying about the Eagles, with the Buccaneers set to do battle in just a few days:

The most Eagles team ever?

We'll start with this fun piece from The Ringer that lays out the case that the 2021 Eagles were kind of the perfect team that explains the fan base. For whatever reason, Eagles fans seem to experience their team's seasons like a teenager with raging hormones. The highs and lows are always expressed with a depth of emotion and authenticity that mystifies other fan bases. I'll let Baumann explain why this particular version of the team did so much to torture fans:

Few teams are capable of such inexorable offensive greatness and susceptible to such mystifying self-sabotage all within the span of a quarter or two. The Eagles could be up by two scores in the third, and the Cassandras and Chicken Littles of Eagles Twitter would be completely justified in their frustration.

Of course, it’s not just that this team is inconsistent from quarter to quarter—the Eagles underwent a genuine midseason transformation. During the first half of the season, first-year head coach Nick Sirianni tried to install a pass-heavy offense, only to find that his plan fit his players about as well as Cinderella’s glass slipper fit her stepsisters. Jalen Hurts will occasionally miss an open receiver but never misses leg day. Rookie receiver DeVonta Smith looks like the real deal, and tight end Dallas Goedert was fifth in the league in receiving yards among tight ends. But Hurts’s other options are a series of busted draft picks who make Freddie Mitchell look like Jerry Rice. [The Ringer]

There is a reason why the aforementioned Eagles fans love Jason Kelce so much. But it took a little while for him to become ingratiated into the fabric of the city he once immortalized with his Super Bowl parade speech nearly four years ago. The center — who is probably a future Hall of Famer — is not afraid to show emotion, and Philadelphia loves him for that. Here's more on the journey of the man who could hang up his cleats after a loss Sunday:

Kelce is indeed multifaceted. He likes to have a good time and laugh as much as the next guy. His temper is almost as legendary as his crying. But it’s that passion and his principled manner, many close to him contend, that propelled the undersized sixth-rounder to become a likely Hall of Famer.

He’s reached the stage of his career where those lofty conversations are being had. The same goes for retirement. It’s possible Sunday’s season finale was his last at Lincoln Financial Field and next Sunday’s playoff game at Tampa Bay will be his final one in uniform.

It may seem like he’s always been a perennial Pro Bowler or Philly favorite. But the Eagles nearly traded Kelce five years ago. Publicly, there wasn’t much objection either. Kelce felt it. He perceived that no one, aside from offensive line coach Jeff Stoutland, believed in him.

Whether that’s accurate or not, the 2017 offseason was pivotal in his career. Those doubts drove Kelce. He was always good, but he has since achieved greatness. He won a Super Bowl. He earned more first-team All-Pro honors than any other center over that span. He’s played through numerous injuries and, including the postseason, hasn’t missed a start in 128 consecutive games. [Inquirer.com]

Better than you think...

Let's turn now to some actual on-the-field football analysis. In Tampa, with the Bucs entering with the No. 2 seed and coming in as 8-point favorites, the confidence level is obviously pretty high. But as Tom Brady made sure to do when he was overly complimentary to the Eagles — calling them the best team he'll have faced this year — they aren't making light of the upcoming challenge. At Buccaneers.com, Smith broke down the biggest difference makers the Bucs need to watch out for (led by Jalen Hurts and Javon Hargrave). He also dives into their strengths and weaknesses. In all, it's an interesting outsiders look at the Birds and I recommend it. Here's a snippet:

Indeed, looked at from another angle, this is an Eagles team that will be bringing the NFL's best rushing attack and the 10th-ranked defense to Raymond James Stadium. The Eagles won six of their last eight games with that final loss to Dallas coming in a game in which Philly started mostly reserves with its playoff fate already decided. Prior to that, the Eagles had held five straight opponents to 18 points or fewer. Javon Hargrave and Fletcher Cox are a load in the middle of Philadelphia's defensive front and a primary weakness of recent Eagles teams – the offensive line, largely due to injuries – has turned into a massive strength.

And then, of course, there is the Jalen Hurts issue. The Buccaneers got a little taste of the problems Hurts could cause in that Week Six matchup, though they handled him pretty well until late in the third quarter. Hurts still finished with 44 rushing yards and two touchdown runs. Hurts finished the regular season as the Eagles' leading rusher, racking up 784 yards and 10 touchdowns, but he's also backed up by a four-tailback rotation of Miles Sanders, Jordan Howard, Kenneth Gainwell and Boston Scott. Sanders not only gained 754 yards but also averaged 5.5 yards per carry.

This Eagles teams is also a team very different from the one the Bucs encountered in mid-October. [Buccaneers.com]

While we are looking at the glass half-full, Frank came up with 10 reasons why the Eagles and their fans should be believers ahead of Sunday's kickoff. His reasoning ranges from their top rushing offense to the different personnel that will be on the field for both teams (Dallas Goedert didn't play in Week 8, Chris Godwin and Antonio Brown did). Here's an interesting one that I would not have expected:

COMMON OPPONENTS: Believe it or not, the Eagles and Bucs have the same record against common opponents. They’ve faced seven teams in common – the Cowboys, Falcons, Saints, Washington, Giants, Panthers and Jets. They both handled the Falcons, Panthers and Jets, the Bucs beating Atlanta and Carolina twice each. The Bucs beat the Cowboys, who beat the Eagles twice. And the Eagles split against the Giants, who the Bucs beat once. But the Eagles swept Washington, who Tampa lost to, and the Eagles also beat the Saints, who the Bucs lost to twice. Both are 7-3 against common opponents. [NBCSP]

For a little more X's and O's, we turn to The Athletic where Wulf gives sort of a recap and once-over of the Eagles regular season performance. And when he gets to the defense, he makes note that one of the big-ticket items on the team's ledger is their defensive line — a unit that underachieved in 2021. With Brady one of the less mobile quarterbacks in football and with their offensive line just a little bit weaker at its interior, the big men up front earning their money could be the difference between upset victory and embarrassing defeat.

If there is a disparity between performance and widely held opinion for the Eagles, it’s the defensive line. Up front, the Eagles have perennial Pro Bowler Fletcher Cox and Pro Bowl alternate Javon Hargrave inside with Pro Bowl alternate Josh Sweat and former first-round pick Derek Barnett on the outside. They are known to prioritize line-of-scrimmage talent and, as a unit, rank third in ESPN’s pass-rush win rate.

But that reputation is misleading. The Eagles rank 30th in the league in sack rate. That’s partly because opposing quarterbacks get rid of the ball quicker against the Eagles than against all but two opposing defenses. Again, all of that is by design.

The recipe for an upset probably includes some kind of game-wrecking performance by Sweat, Hargrave or Cox. [The Athletic]

Strength vs. strength, or weakness vs. weakness?

We'll wrap up with an excerpt from Clancy's latest Eagles mailbag. He's asked if the team should stick with the ground game — which is the offense's bread and butter — even with the Tampa defense performing as one of the best run-stopping units in football. Should they, maybe, put the ball in the air a bit more to try and take advantage of the Bucs' rather mundane secondary? Clancy says no, citing the Eagles' success in a similar spot when they faced the Saints.

At season’s end, New Orleans ended up first in Football Outsiders’ Rush Defense DVOA. They were fourth in rushing yards and first in yards per carry. They felt like the perfect kryptonite to the Eagles’ potent rushing attack. How did the Birds respond to those worries? They torched the Saints on the ground, rushing for 242 yards.

In comparison, the Buccaneers are 12th in Rush Defense DVOA, third in rushing yards and 15th in yards per carry.

The Eagles need to play their game. They got to the playoffs playing like a pre-World War II team that absolutely pounds the rock and overwhelms defenses with their offensive line’s physicality.

Keep with it. If the Eagles win, it’ll be a day where Hurts rushes for 70-plus yards and the whole unit tops 200 yards on the ground as they control the clock and keep Brady off the field. [BGN]