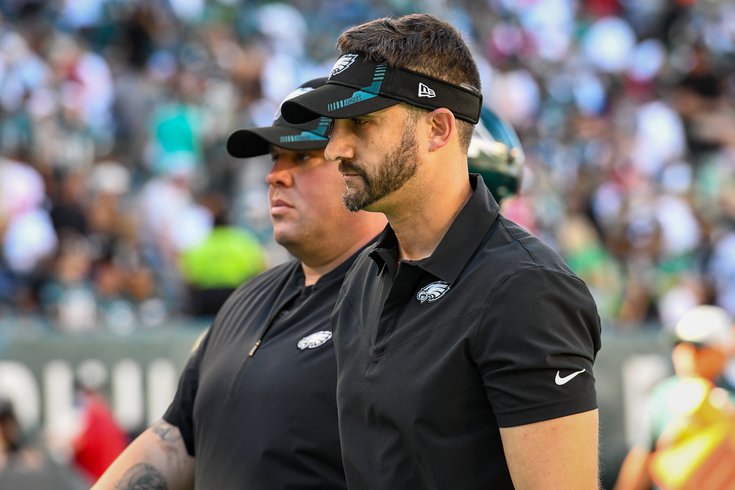 Head coach Nick Sirianni of the Philadelphia Eagles walks off the field after the game against the San Francisco 49ers at Lincoln Financial Field.

Here's where people around the country have the Eagles ranked at the conclusion of the 2021 regular season. Oh, and here's our version of these sellout rankings, too.

There’s no use turning Saturday’s 51-26 loss to the Cowboys into a referendum on the Eagles as they turn their attention to the playoffs. Jalen Hurts and a host of defensive starters sat out Week 18, which likely explains how a competitive game turned into a laugher in the second half. But facts are facts, and the Iggles will enter the postseason tournament with exactly one win over a team that finished above .500, having downed the 9-8 Saints back in Week 11. If Hurts’ ankle allows him to be a playmaker, the Eagles and their dominant run game can put a scare into any NFC contender … but it’s also possible Philly will be exposed as a team out of its depth come Sunday.

Nick Sirianni is the only rookie head coach who took his team to the playoffs this season. The reward is a trip to Tampa to face the defending champs. But whatever happens, this season has been a success.

#JimmySays: There's little question that the Eagles exceeded expectations in 2021, and now they also have a trio of first round picks in 2022. Making the playoffs was a legitimate accomplishment by Sirianni with the roster he had to work with. Anything on top of that is gravy.

While the NFC is top heavy, the AFC was a cluster all season. Considering that, we might have a team or two such as the Chargers that were already sent packing that might be better than the Eagles. This young Philadelphia team also has a huge ask of them heading into Round 1 against the Buccaneers. The Eagles’ rushing attack will have to be dynamic with QB Jalen Hurts to keep up with the defending champs.

#JimmySays: If the Chargers are so much better than the Eagles, maybe they shouldn't have lost to the Texans Week 16.

The Eagles are probably more of a fun story line than a legitimate Super Bowl contender, but anything is possible in one of the weirdest and most parity-driven seasons in recent memory. I’m intrigued to see whether Philadelphia’s smashmouth approach can create some havoc in the playoffs, because any group with a dominant offensive line and one of the league’s most dangerous rushing attacks can’t be dismissed. That tandem could cause problems for the Buccaneers defense, which hasn’t been sharp against the run of late. Behind some rushing combination of Boston Scott, Jordan Howard, Kenneth Gainwell, and possibly Miles Sanders (who’s dealing with a broken hand), the Eagles will look to keep the ball away from Tom Brady for as long as possible on Sunday.

Jalen Hurts will be the true X factor for Philly. He’s a versatile dual-threat quarterback who changes the math of the team’s run game, and he has a knack for scrambling for critical first downs. Hurts will have to do some damage with his arm if the Eagles hope to advance, but with DeVonta Smith and Dallas Goedert running routes, it’s on the table.

Philly is playing with house money after outperforming expectations this season. What better way to keep the fun going than by knocking out Brady and the defending champs?

#JimmySays: Remember the (2019) Titans? They got in the playoffs at 9-7, and made it to the AFC Championship Game with a run-heavy approach. Again, unlikely, but it can certainly happen.

The 2021 regular season did not end the way that the Philadelphia Eagles wanted. But it was Gardner Minshew and the team's second-stringers who were shelled by the Dallas Cowboys, and Eagles head coach Nick Sirianni was clear about his motives for resting players in the regular-season finale.

"We thought it was an opportunity to get (quarterback Jalen Hurts) back to 100 percent," Sirianni told reporters. "We need to be able to have our full arsenal of offense going into the playoffs."

That the Eagles made the playoffs at all is at least somewhat surprising given their 3-6 start. But once they adopted a run-heavy philosophy, they won six of their final eight games.

By season's end, Hurts and running backs Miles Sanders, Boston Scott and Jordan Howard had combined to power a rushing attack that led the league with 159.7 yards per game. That ground game has allowed the Eagles to dictate the tempo of games and to keep pressure off the defense.

But there's a massive problem facing Philly in the Wild Card Round, which could be all but insurmountable: Teams just don't run the ball against the Tampa Bay Buccaneers. No team in the NFC surrendered fewer yards on the ground per game during the regular season.

I don't have a problem with the Eagles resting for a playoff game. That's valuable, as we've seen through the years. They have a tough test at the Buccaneers in wild-card weekend, but they've put themselves in the best position they can to win.

#JimmySays: Did other people have an issue with it?

They head to the playoffs as a dangerous team with their ability to run the football. The pressure will be on Jalen Hurts.