They are what their numbers say they are... 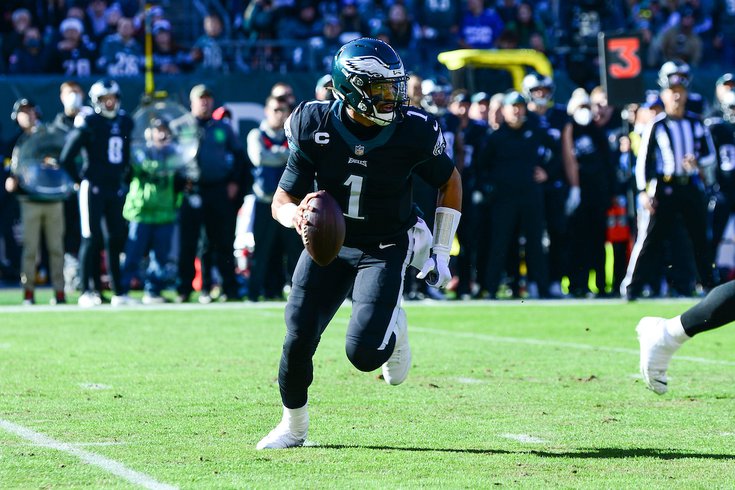 It's kind of hard to remember what it felt like watching the 2021 Eagles back in September and October. Most fans were watching through the lens of knowing it was a retooling year, and expectations were accordingly low.

Slowly but surely, however, the Eagles and head coach Nick Sirianni figured it out, as they took advantage of some terrible teams in the second half of the season to earn an ahead-of-schedule playoff berth.

They are slated to face the Buccaneers in Tampa on Sunday, a 1 p.m. start on FOX. With the regular season in the books, what better time to reflect on what it was, exactly, that got Philly to where it is now.

Here's a look at 10 of the most compelling stats that explain just why the Eagles were so much better than anyone could have hoped for this past season:

The Eagles led the entire NFL scoring 25 rushing touchdowns, a mark that ties the team's all-time record in that category. We're kicking things off with this stat because it was their run game, more than anything else they did, that led them to their surprise playoff berth. Hurts led the team with 10 scores while Boston Scott, Kenny Gainwell and Jordan Howard had the other 15. Somehow, Miles Sanders did not have a touchdown this year.

The Eagles averaged over 159 rushing yards per game and had over 150 more yards than the Colts, who were second in the NFL and boasted the league's leading runner in Jonathan Taylor. They were led once again by Jalen Hurts, whose 784 yards were the most by any quarterback. Credit the offensive line for the fourth best yards per attempt in football (4.9) as well as a scheme that allowed pretty much any RB to be slotted in and succeed.

It's one thing to run on first down — to give your quarterback a manageable second and third. But the Eagles picked up more first downs on the ground than any team this season and it took a ton of pressure off of Hurts and his relatively sporadic arm.

We'll gush one last time about the Birds' run game, by highlighting the fact that no team threw fewer passes in 2021-22 than the Eagles did. It was a revelation when Sirianni decided to alleviate some of the urgency on Hurts to throw the ball 30+ times a game, and once he made the swap in play-calling preference Philadelphia was a new team.

Speaking of that new team we just mentioned, the defense too seemed reborn in the second half of the year too, particularly at stuffing the run. After Week 7 (and not including the meaningless Week 18 loss that saw the backups play), the Eagles allowed just 81.3 yards per game after allowing 133 per game from Weeks 1-through-7. And even if you add in the Dallas loss on Sunday, they still only allowed 90.3 yards per game. This included handling talented opposing backs like Austin Ekeler, Saquan Barkley, Antonio Gibson and others. For context, the NFL's top run defense, the Ravens, allowed 84.5 yards per game this season.

The Eagles made it into the playoffs as the 7-seed in the NFC and it makes a whole lot of sense that Football Outsiders sees them as the 13th best team in football via DVOA. You are what your DVOA says you are, apparently.

While we're looking at the big picture, the Eagles DVOA is lower than one might expect despite their incredible success on both sides of the ball in the second half of the season mostly due to their schedule. They have lost games to the Bucs, Niners, Cowboys (twice), Chiefs and Raiders — all of whom are in the postseason. If the Chargers had been able to tie Las Vegas Sunday night, they'd be 0-7 because they lost to them too. The only team that wasn't god awful who they defeated are the 9-8 Saints, who narrowly missed the NFC wild card. They were 9-2 against non postseason teams and their opponents had a .469 win percentage — third lowest. Does this mean they're destined to be one and done?

An interesting stat that hasn't gotten a ton of attention is just how good the Eagles were on third down this season. They had the fourth best conversion rate in the entire NFL, and that's due in large part to them having just 6.08 yards to go, on average on third down. That's below the league average of 6.92. It's worth noting that they chose to run the ball 77 times on third down, and pass it 72.

The Eagles ran the third most plays per drive this past season. They collected an average of 35.2 yards on each one (9th), scored on 42.9 percent of their chances (11th) and turned the ball over just 9.2 percent of the time (26th). They did all of this while running the third most plays per opportunity in the NFL. This paints the picture of a team that was incredibly efficient.

We'll finish our analysis with a shoutout to the Eagles new rookie receiving yards record holder Smith, who was responsible — according to NFL.com's next gen stats — for 38.05% of Philly's air yards this season. This was the forth highest rate of any wideout in football (Justin Jefferson was first at 45.27%). In all, the Eagles passing game was dominated by Smith and Dallas Goedert, a duo that was responsible for 49% of Philadelphia's passing offense.