Resting their starters against Dallas was the right move for Nick Sirianni and Co. But will it pay off against Tampa? 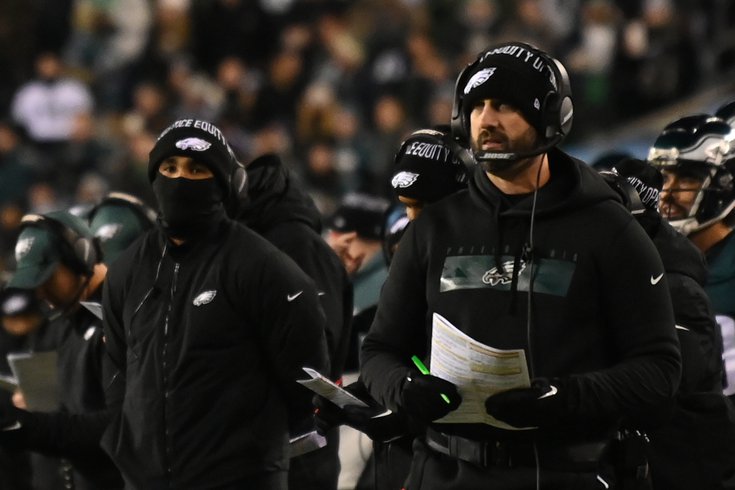 Philadelphia Eagles head coach Nick Sirianni looks on from the sidelines against the Dallas Cowboys.

Rest vs. rust really was never a debate for the Eagles coming into the relatively meaningless regular-season finale, a 51-26 drubbing at the hands of the Dallas Cowboys, a talented team with too much firepower for a secondary rolling out the law firm of McPhearson, Vincent and Scott.

In the wild-card round, it will be Darius Slay and Co. trying to take down the reigning Super Bowl champion Tampa Bay Buccaneers and that’s all that mattered entering Week 18 for the Eagles organization.

"The goal is not to just make the playoffs,” coach Nick Sirianni said after the Dallas setback. "The goal is to win games in the playoffs and advance as far as you can advance. That's our mission and our goal.

One of Sirianni’s peculiarities as a head coach we’ve learned is imagining competitive advantages that don’t really exist — but it’s like a sugar pill at this point. If Sirianni believes it, let him, especially after his job performance as a rookie which generated the unlikely postseason berth and put the first-year mentor on the outskirts of the conversation for Coach of the Year.

After the loss to the Cowboys, Gardner Minshew admitted he was told earlier in the week that he would be under center but Sirianni played coy anyway.

“I found out earlier in the week. I went and talked to [Sirianni] and they let me know,” said Minshew. “I was very excited for the opportunity. I wish we could have taken more advantage of [the opportunities tonight].”

Sirianni also admitted to the subterfuge with everything in the rear-view mirror.

"Some of those decisions, with the COVID stuff, were kind of made for me on that. As far as with Jalen [Hurts], we thought a lot about that. He has done a really good job these last three games playing within the pocket and we have done a little bit less with running with him and everything like that. We just thought this was an opportunity to get him back to 100%.

“I know we have talked a lot about how we have to be our full arsenal of offense and not have any limitations to do what we want to do in the playoffs. So, that’s what went into that.”

The typically affable Sirianni wasn’t apologizing either, even after giving up the 50-burger to the one opponent the fan base always wants to beat no matter the circumstance.

In the heat of the moment, Sirianni did seem frustrated at times as Mike McCarthy pressed his foot on the gas and the Eagles’ coach even got a little testy when asking about the team’s perceived shenanigans when it came to the COVID list.

“I mean, they got COVID. They weren't feeling good,” Sirianni said of the 12 players placed on the list last Monday. ... They were either symptomatic or, again, I'm not going to get too much into COVID, but they had it, so I didn't really do anything there.”

When pressed, Sirianni got terse.

“They got COVID,” he snapped.

Magically the only player that recovered was Jason Kelce, who played one snap to keep his impressive 122-game consecutive starting streak intact.

It’s always funny how science so often aligns with the wants and needs of the NFL and its member teams.

Rest or more specifically, avoiding potential injuries to as many key players as possible was the only win the Eagles were interested in during Week 18 and it was an organizational decision that really was decided back in the summer where the foreshadowing was how quickly the Eagles got into veteran maintenance days at training camp and the 70-minute practices.

Of Philadelphia’s usual 22 starters, only six were dressed against the Cowboys and just four of them played, which included Kelce’s ceremonial snap.

The only real starters out there for legitimate time were the receivers, and DeVonta Smith was pulled after Sirianni and Co. got him his franchise rookie record for receiving yards.

Many coaches – especially older school ones like McCarthy – believe winning is a habit and by extension, losing is as well.

Sirianni’s banking on the fact that most of the players that will have to carry things in Tampa didn’t experience the road kill-like fantasy camp Dallas provided.

If the Eagles pull off the upset in Central Florida, all is forgiven and Week 18 becomes a forgettable footnote. If they lay an egg, it will be spun as the beginning of the end.

Reactionary takes are just that, however.

If the modern NFL where preparation time is collectively bargained to a minimum, the smarter organizations have realized the cost-benefit analysis has changed and correctly assessed that getting as many as possible to the finish line healthy has lapped everything else.

Win or lose against Tom Brady’s bunch won’t change the fact that the Eagles gave themselves the best chance to win by turning a rivalry into a glorified preseason environment.