Eytan Shander: A whole heck of a lot is riding on this Eagles playoff game 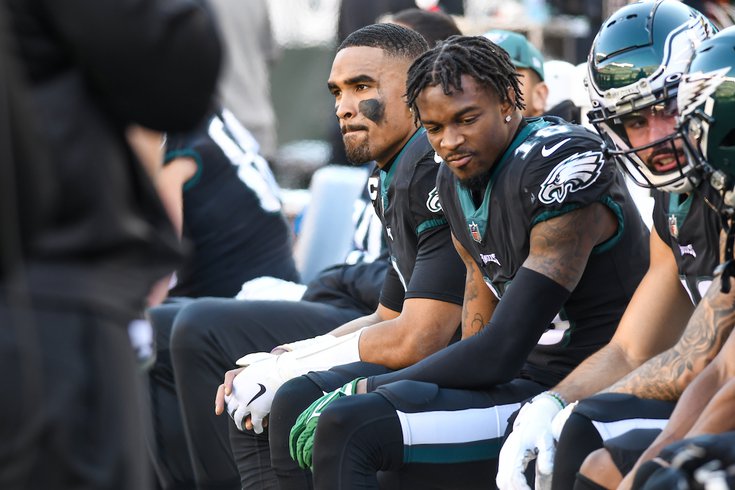 Eagles quarterback Jalen Hurts looks on from the bench.

Everything rests on this one game.

The mood during the week leading up to the Cowboys game – and ultimately through the game – was lackluster at best. For a city that hosts “Cowboys Week” something was noticeably absent ahead of a glorified preseason game.

Now it matters. So much more matters than just the Eagles advancing. Consider this game a representation of the season itself. Either extreme validation or over-the-top tearing down.

As we approach the only game that matters – season-defining as it will be – what’s safe to you and me, may not be safe in the organization. Most of us are excited about the possibility of building at the QB position with Jalen Hurts, but a failure to throw the football against the Bucs may change that for the front office. At least long-term.

A bad loss with an inept offense that’s limited in the air may put those first round draft picks in use for a trade, rather than help the defense around Hurts. If there’s one thing we’ve seen with this organization – especially at the most important position on the field – it’s crazy volatility. I’ve learned my lesson trusting them with any long-term future of a quarterback.

So, yes. This game might spell the beginning of the end for yet another Eagles quarterback — but it’s so much more than just that. The team has gone through a major shift, and that can’t be denied. The run they had was beyond impressive mainly because a lot of us thought they were left for dead mid-season.

There’s just one undeniable fact about the schedule and results that followed. Something that can easily be explained once we see this game unfold against Tampa Bay.

Is it fair to reduce an entire season down to one playoff game? Can we truly define what this team was on the field with how they play against Tom Brady and the Bucs? Ab-SO-lutely.

The team started off the season looking bad for a myriad of reasons, the easiest one to point to was they weren’t running the ball. They were also playing far better competition at the start of the year, especially struggling to get things going early in games. The light switch flipped to a run-first offense, and they started beating teams, but the competition level dropped – significantly.

Outside of placing a wager and talking about that, I didn’t think it was fair to reduce any regular season run to just playing bad teams. It’s the NFL and you still have to go out and win those games, no matter what string quarterback you face. It’s not easy winning on the road, no matter how bad the opponent is.

Let me be clear for the people who live on Twitter and can’t comprehend multiple thoughts competing in the same space – nobody should be reducing the run the Eagles went on to talent level. The run is inconsequential if they lose. It’s everything if they win.

The Eagles failed to beat more than one team – the QB-less Saints – with a winning record. That will be a glaring fault if they can’t beat the Bucs. It will hover over the season not as a cloud of failure, rather a reminder of how wide the gap truly is between the haves and have-nots. The Eagles will be on the better side of the have-nots who got lucky without any major COVID breakouts. A team that returned so many starters from the playoffs just two seasons prior, with a couple of amazing football players on defense. One of seven new teams to make the playoffs in an ever-transient league unless you are a “have” which the Eagles are not.

Not fun to read, right? Get ready for it. The team’s identity this season will be concentrated down to one game. If they can’t keep with the Bucs, then the Eagles were always just the best of the mediocre bunch, begging the question of how lucky they got versus how sustainable this season truly is.

Now we’ve got something.

All of a sudden, that run was everything. The switch to actually running the football will go down as one of the most famous pivots of all time. The stepping back of coaches and listening to players like Fletcher Cox should be highlighted as great moments in leadership. The rookie impact will be praised – from Howie Roseman down to the kids on the field making it happen. The lights will shine brighter at night in South Philadelphia. The food tastes better. Even the cold, bitter bite of the winter air feels a little easier on the cheek…

..and yes, you can start talking about the Super Bowl.

This is either a gigantic bear trap or a colossal mistake by the books. I know those casinos are built to the sky for a reason, but I also believe the public isn’t following the Cardinals close enough. They are amazing on the road – we gave you them beating Dallas outright – and stink at home. Arizona is 8-1 ATS on the road, playing a division opponent coming off a brutal OT loss, and getting an extra point. This one is simple – Cards away from home are a must bet. Being over the key number of 3 is huge in this case, so I have no issue taking the points versus the money line. I do like the Rams to win, or be in it long enough to win, but not by more than four points.