Eagles vs. Buccaneers: Five matchups to watch, when Tampa has the ball 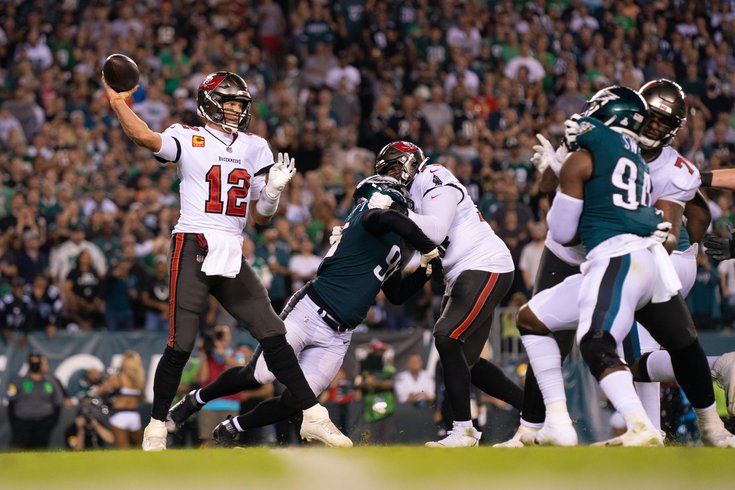 "This guy, he's a trained killer."

The Philadelphia Eagles are back in the playoffs after a one-year hiatus, and as the 7-seed, they'll have the most difficult route to the Super Bowl in the NFC. First up will be the No. 2 seed Tampa Bay Buccaneers, followed by the No. 1 seed Green Bay Packers at Lambeau Field if they're able to advance to the divisional round.

The Eagles' defense was good against bad quarterbacks this season, but the good/great ones shredded them:

Of that group, the Eagles actually did a decent enough job on Tom Brady Week 6. It looked early on like it was going to be an ugly night, as the Bucs had consecutive 75-yard TD drives on their first two possessions. But as the game progressed, the defense did enough to force three punts, a turnover on downs, an INT, and second INT that didn't count, though it's worth noting that after the Bucs got a 28-7 lead, they sort of took their foot off the gas a bit and played more conservatively.

If you'll note, it's been a while (Week 9) since the Eagles' defense has faced a top-level quarterback in a game that mattered. Gannon was asked where the defense has improved since then.

"All areas, honestly," he said. "The run game, passing game, rush and cover, cover and rush, being in the right spots, winning our leverage side a little bit more... So, we know to be in this game, our execution level has to be high."

As you're all aware, Brady is arguably the best player in NFL history.

"This guy, he's a trained killer and he knows how to play good offense and what he needs to do to keep his offense on track," Gannon said.

Gannon will need an outstanding plan is the Eagles are going to leave Brady bereft on the turf.

2) The Eagles' secondary vs. the Bucs' depleted wide receivers

It feels like a lot of people think of Brady at this stage of his career as a quarterback who gets the ball out quickly, and is an assassin the short-to-intermediate game. And yes, he can certainly beat you that way, however, the Bucs are far from a dink-and-dunk team. They push the ball down the field. In fact, they led the NFL this season in pass plays of over 20 yards, with 76. Here's the company they keep in the big play department:

It's no coincidence that nine of those 10 teams made the playoffs.

The Buccaneers will have to figure out how to keep the big plays coming without Chris Godwin (torn ACL) and Antonio Brown (recently released). In Mike Evans, Godwin, and Brown, the Bucs once had arguably the best trio of wide receivers in the NFL.

They still have Evans, a 6-foot-5 beast who can win with speed or with his physical play on contested catches. He has had a remarkable career, topping 1,000 receiving yards in each of his first eight (!) seasons in the NFL.

With Godwin and Brown out, the Bucs still have good depth at the position, including the following players:

Perriman is a big play threat who has experience in Bruce Arians' offense going back to 2019, when he had 645 yards and 6 TDs catching passes from Jameis Winston.

In summary, while the losses of Godwin and Brown obviously hurt, it's not like the Bucs are now forced to play someone like J.J. Arcega-Whiteside.

Gannon punted on providing a scouting report for each of those above receivers, and instead focused on Tampa's offensive efficiency.

"I would say just from a global offensive perspective, the timing of their routes are very, very, very good," he said. "The distribution of their concepts is very good. The ball, obviously, comes out extremely fast, it's on time. And in the passing game, just like on defense, you got to have all 11 executing at a high level.

"You see whoever's out there for them, they all execute at a very high level. Their offensive line is very good, they have a lot of continuity with their offensive line. Tom is on the same page with all the receivers and the backs. They know how to adjust their routes based off coverage. When they call certain concepts, the spacing is spot on, the timing is spot on and they execute at a high level. Their technique within that is very good.

"So, that's what sticks out on the tape more than the people. We know have they have weapons all over, but it’s the same page and the continuity and the execution level is very high."

I think conventional wisdom would say that Darius Slay will follow Evans wherever he goes, however, it's the bigger, physical receivers that tend to give Slay the most trouble. See: Davante Adams and DK Metcalf, in 2020.

3) Rob Gronkowski vs. the Eagles' linebackers and safeties

With the Bucs' depleted wide receivers banged up, Brady has predictably leaned more on his tight ends, namely Rob Gronkowski, who had 14 catches for 252 yards in Tampa's last two regular season games. He can still play.

But beyond Gronkowski's skills as a player, what makes him so difficult to defend is that he has played with Brady for like a hundred years, and they know exactly what to expect from each other. For example, in the Cowboys-Bucs matchup Week 1, the Cowboys show a heavy blitz, with Cover-0 behind it. The original call is for Gronk to stay in to block, but Brady audibles to a look where Gronk blocks and then releases. The result is a TD.

That's the kind of high-level adjusting that two veterans make on the fly when they have as much familiarity as Brady and Gronk.

The Eagles didn't have to face Gronk Week 6. They must be assignment sound against him in this matchup.

In the Week 6 matchup, Fournette got 28 touches. He had 22 carries for 81 yards and 2 TDs, and added 6 catches on 6 targets (mostly dump-downs) for 46 yards. While the Eagles held him to 3.7 yards per carry and 7.7 yards per reception, they had a chance for those averages to be much lower, but in re-watching that game, I would say they missed close to double-digit tackles on him.

"I've always thought we tackled pretty well," Gannon said. "If you look at the Tampa game, I don't think we tackled as well as we have in some other games. Some of that was them; some was us."

The Eagles' run defense finished 2021 ninth in run defense. They were much better defending the run in November and December than they were in September and October. A visual:

As you can see, the Eagles allowed at least 100 yards on the ground in each of their first seven games. Thereafter, they allowed at least 100 yards once (omitting the meaningless Week 18 practice squad game). Some of that was quality of opponent, and some of that was game flow, but the Eagles' defense also simply did a much better job of being in the right place to get stops, and they have mostly tackled well.

Fournette was able to get solid gains on first downs, and convert on 3rd and short situations against the Eagles Week 6, because of broken tackles. If the Eagles' defense as a whole can tackle better against him, they can put themselves in a better position to force punts and field goals instead of allowing drives to continue.

The Buccaneers have one of the best offensive lines in the NFL, and as Gannon noted above, they have played together for a while. Their line looks like this:

The interior of the line is manned by a trio of blue collar small school guys in Marpet (Hobart College), Jensen (Colorado State - Pueblo), and Cappa (Humboldt State). They're all scrappers who are particularly good in the run game. However, they do give up pressure up the middle at times in the passing game.

We often say in these matchup posts that Fletcher Cox and Javon Hargrave have to create pressure up the middle, but that's especially true against a quarterback like Brady, who won't often venture from the pocket, but who has outstanding pocket presence and knows how to make subtle-but-effective movement away from edge rushers. He's less effect when the pressure is right in his face.

The Eagles have a ton of resources tied in in their defensive tackles. Now is when they need to see those investments pay off.