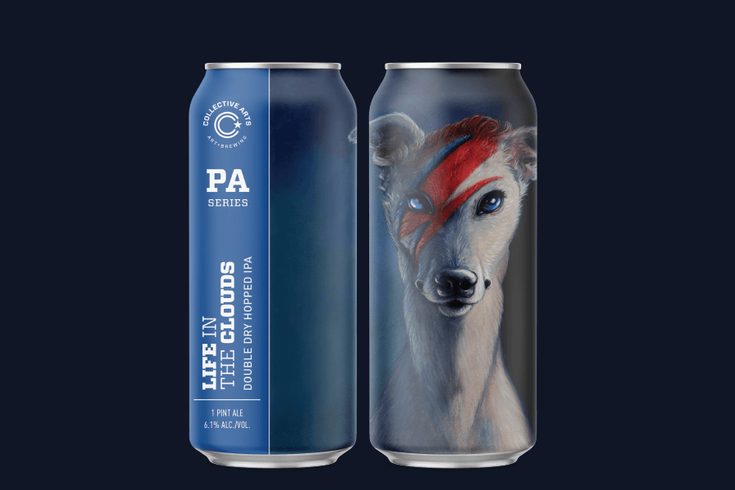 "Each year-round beer will have four pieces of art at any one time, and those change four times a year. So each flagship beer showcases 16 pieces [of art], and then we also have all of our limited-release beer featuring art as well," said Matt Johnston, co-founder and CEO.

He and Bob Russell started Collective Arts almost six years ago. "We poured our first pint in September 2013," said Johnston.

Every three months, the brewery does a "Call for Artists" and receives around 2,000 submissions. Then an internal team and volunteer curators from various creative fields narrow it down to 55 artists. The group of experts changes each time to provide a "fresh look at creativity," according to Johnston.

"We don't ask for unique work, so it takes five minutes to submit. If we select them, then we pay them. We use [their art] for a limited time on our packaging and take no ownership," Johnston explained.

There are also times when Collective Arts reaches out to specific artists to collaborate. To celebrate Collective Arts moving into two Pennsylvania markets, Philadelphia and Pittsburgh, the brewery partnered with four Philly illustrators who had previously been chosen through various "Call for Artists."

The artwork of Christina Hess, Dave Boyd, Alex Dos Diaz and Alex Eckman-Lawn is featured on limited-edition cans of Life in the Clouds, a New England-style IPA.

"My first time collaborating with Collective Arts was on their Series 4. I was about to graduate University of the Arts at the time. A professor I had shared the opportunity with the entire class and thought it would be a good way to get our work out there," said Diaz.

For Eckman-Lawn, one of the great things about Collective Arts is "they let artists submit work and then pair it with the appropriate style [of beer], instead of making a label for a beer."

"I've personally never seen anyone in the brewing business do this," said Diaz.

And the visual art used on the cans could really be anything creative – just look at the four Philly artists' work as an example.

"I like to call him a human geode – basically an old-timey guy full of crystals," said Eckman-Lawn on his artwork used for the Pennsylvania launch series.

While Hess, who creates spoofs of historical personalities as animals, has her "David Bony" – Ziggy Stardust as a dog – featured.

Her artwork of Napoleon Bonaparte as a Basset Hound and Queen Elizabeth I as a white cat were also previously used.

Boyd's artwork chosen for the local series was originally based on the H.G. Wells book "The Sleeper Awakes."

As for Diaz, he describes his style as "if Art Nouveau and Baroque had a child that watched anime (good anime) its entire childhood."

To introduce drinkers to the beers and local artists, there are special launch events happening across the city and suburbs through Friday, March 15.

Pennsylvania is the latest expansion for Collective Arts, which is currently in only a few U.S. states: Connecticut, New Hampshire, Massachusetts, Vermont and New York. In addition to Canada, internationally the beer can be found in the UK and Sweden.

"I think if you look at Philadelphia, the street art scene is there and the music scene is really inspiring and world class. And then you look at Pittsburgh, and it's a steel town that is evolving to be a creative hub as well. Our brewery is in Hamilton, which is Canada's steel town and we went through that same creative renaissance. So there's a lot of like-mindedness and inspiration in Pennsylvania," said Johnston on the decision to bring Creative Arts to the Keystone State.