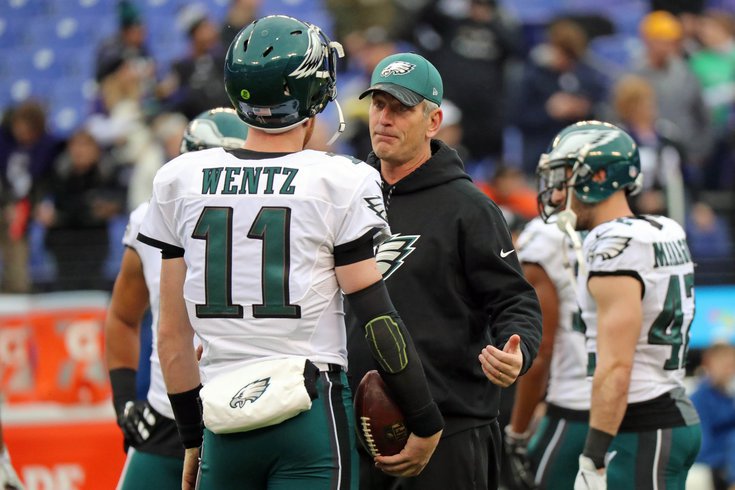 Carson Wentz won't be wearing No. 11 when he reunites with head coach Frank Reich as a member of the Indianapolis Colts. Wider receiver Michael Pittman Jr. told the former Eagles quarterback he's not giving up No. 11.

Former Eagles quarterback Carson Wentz — has that sunken in yet? — will be sporting new digits for the Indianapolis Colts next season, leaving No. 11 behind in Philadelphia.

Indy wide receiver Michael Pittman Jr., fresh off an impressive rookie season, told TMZ Sports that he's spoken with Wentz and told his new quarterback he doesn't plan to give up his jersey number.

"He was just seeing how locked in I was to 11, and I told him that I was locked in," Pittman said. "He was like, 'That's cool, bro, because I'm probably going to switch, anyway.' It went really well and he's just a cool guy. I mean, he didn't try to press me or anything like that. He asked me very respectfully and I appreciate him for that."

For a guy who faced his share of locker room drama in Philadelphia, it's probably a good call for Wentz not to make a big deal out of a jersey number. The Colts' only retired quarterback numbers are Peyton Manning's 18 and Johnny Unitas' 19. Andrew Luck wore No. 12 before his retirement.

Wentz arrived in Indianapolis last week after the Eagles and Colts came to terms on a deal that will net Philadelphia a third round pick in 2021 and a second rounder that could become a first rounder in 2022.

Pittman, who emerged as a playmaker during the second half of last season, said he plans to train with Wentz this offseason.

"He's just a super chill guy and I can't wait to get with him and start throwing and stuff," Pittman said.

Not all jersey-number conflicts are handled so smoothly. They often involve some kind of financial transaction that underscores how much money pro athletes have to throw around.

In 2004, when running back Clinton Portis went from Denver to Washington, he agreed to pay teammate Ifeanyi Ohalete $40,000 in order to keep No. 26. They ended up in court because Portis never paid Ohalete when he was released. Portis eventually was ordered to pay $18,000.

And in Philly, Mitch Williams famously paid John Kruk two cases of beer in order to get No. 28, only to switch to No. 99 later during his tenure with the Phillies.

Last season, Tampa Bay Buccaneers wide receiver Chris Godwin was willing part with No. 12 to appease Hall of Fame quarterback Tom Brady, and they only went on to win the Super Bowl.

Wentz is no Brady at this point in his career, but Pittman better hope Wentz is "locked in" on whichever number he decides to go with in 2021.