Coming soon: 2-7 inches of snow to Philly region, with potential for more in some places 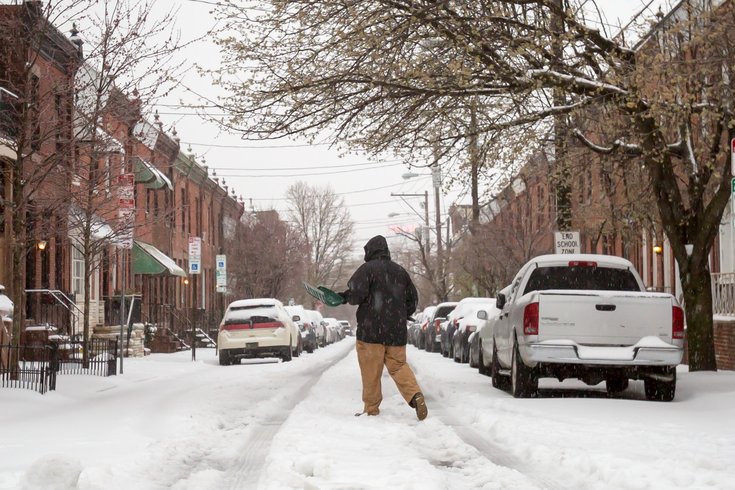 Snow covers North 23rd Street in the Fairmount neighborhood of Philadelphia on March 14, 2017.

The first snow accumulation of the season is on the way and the heaviest snow looks to fall in South Jersey.

A winter storm watch will be in effect late Friday night through late Saturday, according to the National Weather Service.

Snow accumulations of 4 to 7 inches are possible from Cherry Hill to Jersey Shore towns. The heaviest snow from the coastal low storm is expected to fall between 6 a.m. and 6 p.m. on Saturday. Temperatures will stay cold.

In Philadelphia and its suburbs to the north and west, a winter weather advisory will be in effect from 1 a.m. Saturday to 1 a.m. Sunday. 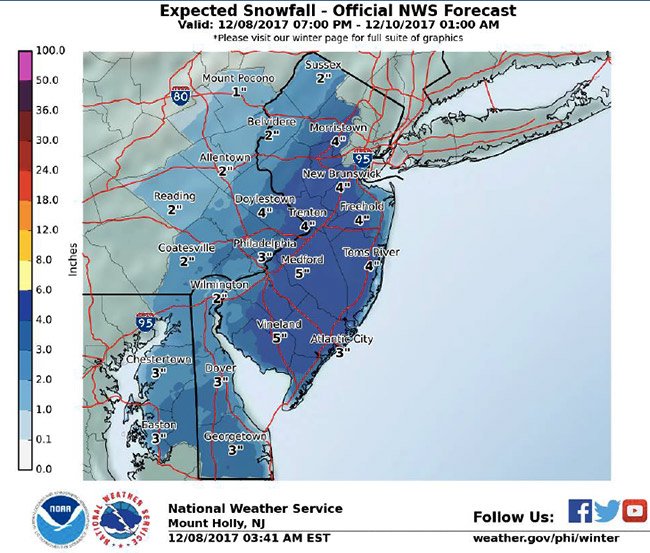 Less significant accumulations are expected, from 2 to 4 inches, with the heaviest snow falling during the same 6 a.m. to 6 p.m. frame, forecasters said.

The snow was expected to arrive around 2 a.m. Saturday in the Philadelphia and in Doylestown, Bucks County, as late as 5 a.m. Saturday, but it arrived several hours late.

There is a possibility of banding, according to forecasters, that could bring as much as 8 inches of snow along the New Jersey side of the I-95 corridor, though forecast models are not in agreement on where that could occur.

Forecasters warned motorists of slippery conditions on snow-covered roadways and reduced visibility. In areas where the wet snow falls the heaviest, downed power lines are possible.

In Philadelphia, the Streets Department will have 70 trucks available to put salt down on streets when the snow begins to fall.

Snow blanketed parts of the Deep South on Friday. A wintry mix of rain and snow was forecast in several southern states before the storm headed north along the coast.

Meanwhile, the cold will remain this weekend.

Philadelphia, as well as Montgomery County and Camden County, have issued Code Blue alerts for the weekend. In Philadelphia, homeless outreach teams will patrol the streets, urging homeless people to come to local shelters. People do not need ID to enter Code Blue shelters or cafes from the street, and they can remain indoors throughout the duration of the Code Blue.

On Sunday afternoon, the passing low-pressure system will drag a strong cold front through the Mid-Atlantic. Bursts of snow showers or even some snow squalls are possible. Winds will rise to 15-20 mph with gusts possible from 30-40 mph, the weather service said.

Here is the 7-day forecast:

Saturday: Snow. High near 35. Calm wind becoming north 5 to 9 mph in the morning. Chance of precipitation is 90 percent. New snow accumulation of 1 to 3 inches possible.

Sunday night: Partly cloudy, with a low around 24.

Monday: Mostly sunny, with a high near 41.

Monday night: A chance of snow showers after 1 a.m. Mostly cloudy, with a low around 29. Chance of precipitation is 30 percent.

Tuesday night: Mostly cloudy, with a low around 20.

Wednesday: Mostly sunny, with a high near 30.

Wednesday night: Partly cloudy, with a low around 20.

Thursday: Partly sunny, with a high near 35.