Thousands of plots were sold off in 1997 to U.S. Bank in an effort to raise money for the School District of Philadelphia 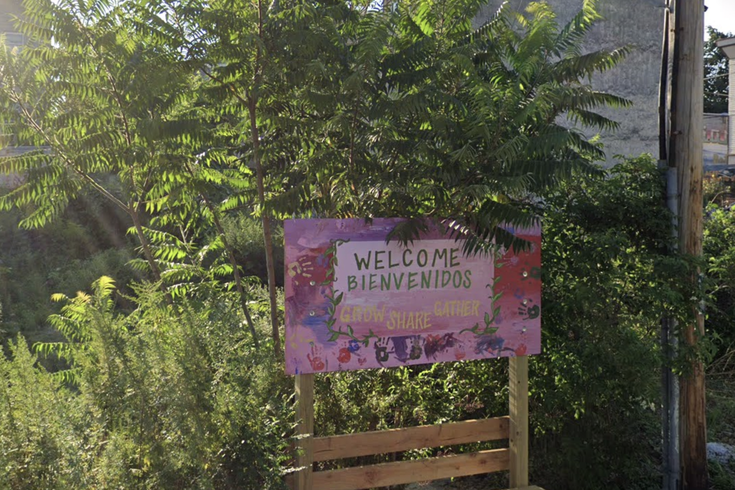 Cesar Andreú Iglesias Community Garden is one of hundreds of gardens and green spaces in Philadelphia that are at risk of being sold at sheriff's sale by US Bank. Councilmember Kendra Brooks unveiled a proposal for the city to reacquire the land it sold off during a failed effort to earn money for the School District of Philadelphia in 1997.

A failed effort to raise money for the School District of Philadelphia in 1997 resulted in city officials selling off 30,000 city-owned land parcels to U.S. Bank. Though it did not solve the funding problem for the District, the properties have been held by bank liens for more than two decades and are currently being sold off individually at sheriff's sales.

Many of the lots, which have sat dormant and neglected for years, were taken up by community residents who provide upkeep and maintenance. As the communities do not own the properties, they are often left with limited notification if the land is being sold at a sheriff's sale.

The proposal would allow the city to reacquire some of the remaining properties and work with City Council and other neighborhood stakeholders to return the plots of land to the communities they're located in. The buyback proposal would include $10 million added to the city's budget for a one-time payment to purchase the lots.

"The Restore Community Land campaign is an effort to right the wrongs of our city's past treatment of Black and Brown communities and forge a path toward land sovereignty," said Brooks. "As a trained restorative justice practitioners, I believe it is the city's responsibility to address the harm that it caused when it sold off thousands of properties and left it to the community to pick up the pieces when the properties sat empty for years. After decades of unpaid land stewardship and thoughtful maintenance, these residents deserve a say in what happens to these lots."

If the city reacquires the lots, community members would then be able to purchase them directly through the Philadelphia Land Bank, allowing them to take full control over the green spaces they have spent years maintaining.

The majority of the available plots of land are clustered in low-income, predominantly Black and Brown neighborhoods in Germantown, West Philadelphia and North Philadelphia. These communities have faced historic divestment and the impacts of gentrification and predatory development.

The proposal also includes negotiations with U.S. Bank on the properties currently up for sheriff's sale in order to protect and return them to community ownership. Though sheriff's sales were postponed throughout much of the pandemic, they resumed in April 2021 and U.S. Bank began attempting to resell the rest of the properties.

The Restore Community Land campaign is made up of several City Council members, as well as Neighborhood Gardens Trust, Philadelphia Legal Assistance, Public Interest Law Center and Soil Generation. The stakeholders identified around 500 at-risk parcels of land that are being actively used as community gardens or side yards throughout the city.

An additional 475 parcels were identified as possible spaces to use for assembling additional affordable housing in the city, as Philadelphia continues to grapple with its housing crisis.

When asked about Mayor Jim Kenney's response to Brooks' proposal, city communications director Kevin Lessard noted that not all of the properties held by U.S. Bank liens are used as community gardens.

"We have had conversations over several years with U.S. Bank on these liens and will continue to do so until we can resolve this issue," said Lessard. "At the same time, the city has limited resources and dedicating $10 million to this would impact our ability to fund other priority projects, and it would need to be considered within the frame of our budget process."

On Tuesday, members of the Restore Community Land campaign met at a community garden in East Parkside that is currently held with a U.S. Bank Lien. The area has been maintained by residents of the predominantly Black neighborhood and has provided fresh produce and vibrant plant life to the community, which has been beset by a shortage of affordable housing and increased impacts of climate change.

When the city sold off the large supply of empty land parcels, its efforts failed when investors didn't earn a return on the spaces. Though the spaces remained empty and neglected by owners at U.S. Bank, advocates say these empty spaces are now ripe for development.

Members of the Cesar Andreú Iglesias Community Garden launched their own campaign to stop the sale of the Norris Square community green space. Its members noted that U.S. Bank had refused to negotiate with the city, and now that the spaces are "valuable for investors and real estate developers, they are selling them off as fast as possible."

Research from the National Environmental Education Foundation has found that green spaces can reduce community violence and promote health through the maintenance and upkeep of urban spaces.

A previous study from researchers at Columbia University and the University of Penn found that the restoration of blighted land resulted in a 58% reduction in people's fear of going outside due to violence and a 76% increase in their use of outdoor spaces.

Brooks and other City Council members stated the urgency of the proposal, as U.S. Bank has made plans to sell off the rest of the parcels of land through sheriff's sale by 2023.