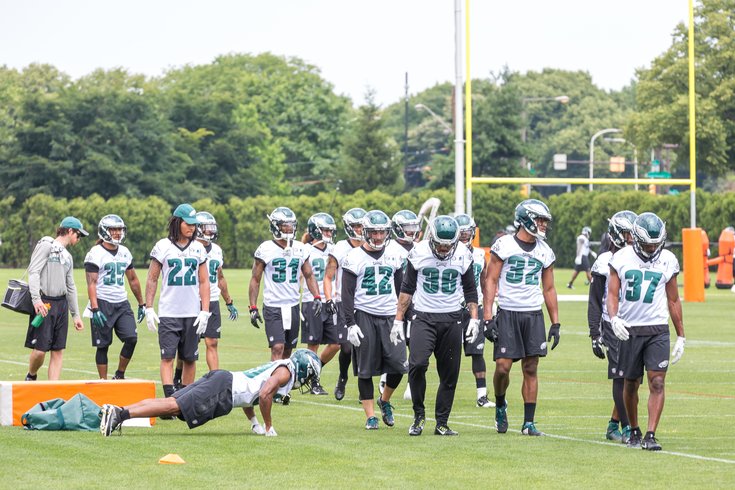 The Philadelphia Eagles upgraded their wide receivers this offseason, and so far, through the first week of training camp, they've dominated. Hooray?

It hasn't just been former Pro Bowl player Alshon Jeffery, or former 1000-yard catch guy Torrey Smith who are doing the damage, either. It's also been guys like 2016 undrafted free agent Marcus Johnson, who looks like the offspring of Jerry Rice and Randy Moss, if that were possible.

Maybe the receivers are just that good, and the Eagles are going to break records offensively this season. Or maybe their corners just stink.

Any casual Eagles observer could easily identify that the cornerback position was likely to be the team's weak link in 2017. After eight days of training camp, the corners have done nothing to quell those concerns.

A season ago, Jalen Mills had some decent moments, most notably when he followed Julio Jones all over the field and Jones didn't completely wreck the game (although he did have 10 catches for 135 yards that day). On the whole, in coverage, there was a lot more bad than good from Mills, as he was susceptible to the deep ball and could not produce any turnovers. Mills has clearly been the Eagles' best corner in camp so far, although he has not been a standout in any way.

The other first-team corner heading into camp, newly signed Patrick Robinson, has been dreadful, getting roasted all over the field. When asked how Robinson has looked so far, Doug Pederson could only muster up enough to praise to say that Robinson is learning the playbook.

"I'll tell you, I've seen some really good strides understanding Jim's defense, how Cory [Undlin] is teaching his drill work, his fundamentals," said Pederson. "He's obviously taken it from OTAs right into camp. So I've seen a lot of improvement there."

To translate, what Pederson really said was, "It's too bad Robinson isn't a starter for the Giants, Cowboys, or Redskins."

The starting nickel corner is Ron Brooks, who is entering his sixth season in the NFL, and still does not yet have any interceptions or forced fumbles.

As for the rest of the bunch, here's how many snaps they have played in the regular defense over their careers:

Douglas had an encouraging spring, but he has cooled off considerably in camp. Smith and Grymes have had good moments, but are totally inexperienced, as the above chart makes very clear.

Unless the Eagles can somehow summon the powers of Mr. Miyagi to heal rookie Sidney Jones' ruptured Achilles so that he can start playing immediately, there's absolutely no way the Eagles can head into this season with the corners they presently have on the roster.