The consensus in South Jersey? Neither side can wait until the presidential election is over

Due to voting patterns, registration and turnout history, there are no truly contested races above local in South Jersey 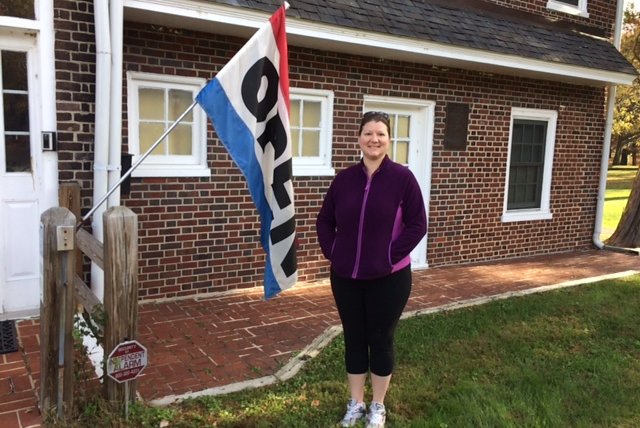 Haddon Township resident Katy Sosa, a registered Democrat, said she's not a huge fan of Hillary Clinton but voted for her anyway because she has so many issues with the Republican candidate, Donald Trump. She'd like to see more third-party choices in the future that better mirror her beliefs, but she said she rejected going that route on Tuesday because she worried that might help Trump.

New Jersey voter Garry Morrison expressed a popular sentiment as he showed up Tuesday morning to cast a ballot for the next president of the United States.

“I can’t wait until the damn thing is over,” said Morrison, a resident of Haddon Township, a middle-class South Jersey town that tends heavily toward electing Democrats.

Morrison, who, like his wife, Cecilia, cast a ballot for Hillary Clinton, was weary of the ugly presidential contest between her and Donald Trump.

Morrison said he had found much to agree with in Trump’s anti-Washington, D.C. rhetoric.

“But he’s not the guy to correct it. He’s the biggest liar of the bunch. He’s an egotist,” Morrison said.

Katy Sosa, a Democrat, voted for Clinton, but not with much enthusiasm.

“I’m not a huge fan, but I’m certainly not a fan of Donald Trump’s,” she explained.

She rejected voting for a third-party candidate – Jill Stein of the Green Party and Gary Johnson, a Libertarian, were her ballot's other choices – because she worried that could help Trump, but she hopes there are more choices in the future that align better with her views.

Molly Fleming, a Haddon Township resident planning to vote after work Tuesday evening for the Democrat, was energized, having attended Clinton's closing rally in Philly the evening before.

"It was inspiring to be with that many people excited about the election.  To be among two  presidents, two first ladies and the first female presidential candidate was awe inspiring," she said.

"What's on my mind as I vote is that while this has been such a divisive race, I appreciated the message that we we truly are a country of inclusion, tolerance, and justice.  At the rally people exploded when themes about gay rights, economic equality, immigration reform, safe gun control, education, and racial justice were addressed.  People believe that everyone deserves an equal shot to succeed.

"Being there helped me remember that we are a good and decent country - and that those ideals espoused by Donald Trump as his supporters do not represent the whole country by a long shot. And the music was great, too!  But that is not why I was there," added Fleming. 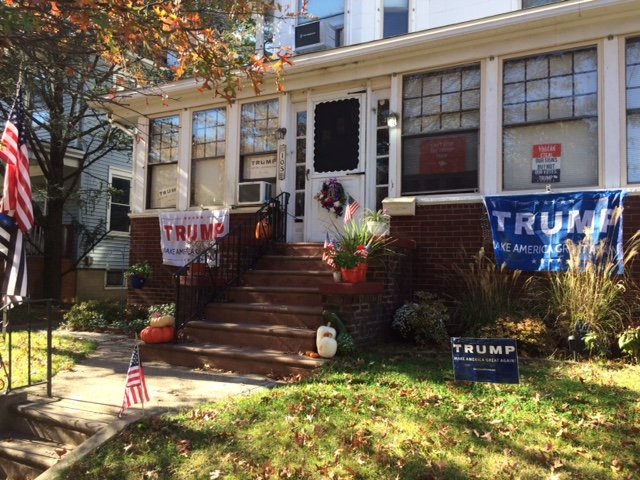 While Hillary Clinton is expected to win New Jersey -- opponent Donald Trump never even campaigned in the state -- the Republican still has fans here, including this home in Collingswood.

A town over, in more affluent Haddonfield, Republicans Chris Mahon and Janis Vermait cast ballots for Trump even though both believe he will lose the election.

Mahon explained, "We're not joiners." Vermait nodded, adding, "Voting is our one option."

At the same time, Mahon said he had "held his nose" as he voted for Trump, adding he was anxious for the campaign to end. But, "we have a better shot with stronger leadership with him."

Vermait said she was fed up with the dueling negative ads and seeing them stop will be good.

Mahon worried that should Clinton win, her presidency will be dogged by Congressional investigations that will further cripple finding common ground in Washington.

A lifelong Democrat for 40 years, Angie voted for Trump at her polling place in Haddonfield. In fact, she was fed up enough to vote straight Republican for the first time. Angie didn't want to have her last name used "because I don't want to be judged."

Her husband is also voting Trump, but her two adult children are voting Clinton. She has not told many friends that she was  supporting Trump.

Her rationale for supporting the Republican businessman?

"She's more crooked than he's insane," she explained. "I truly believe he wants to make the country better."

Angie added that she knows Trump has insulted "military leaders, women and ethnic groups," but she added she thinks he is simply "voicing what's not being said by others."

On the other hand, Angie said she had never liked former president Bill Clinton. She said his wife, Hillary Clinton, "was not investigated thoroughly. The FBI wanted to clear her."

The conventions "sealed it for me," said Angie, adding that Hillary Clinton comes off as "condescending."

"If she's elected, it will be four more years of the same," added Angie.

Dan Keashen, a spokesperson for Camden County, said as of mid-day there had been no reports of major problems.

"Business is brisk," he said of turnout. A record 40,000 mail-in votes came into the county, he added. The county, which has used early voting for the first time ever in this election, had about 4,000 votes cast before Tuesday, added Keashen.

For better or worse, the outcome of the presidential race and all but one congressional race throughout New Jersey were decided even before polls opened at 6 a.m., according to Brigid Callahan Harrison, a professor of political science and law at Montclair State University.

“Like almost all New Jerseyans, South Jerseyans have an enormous amount at stake in this election but have little voice.

“That’s because the outcome of New Jersey’s presidential vote has largely been determined, based on both our state’s demographics, our past voting history and the strength of the Democratic Party in the state,” she said, meaning Clinton will win the state.

Trump has tacitly acknowledged that, never once campaigning in the state, where he did not even establish a field office.

That’s in sharp contrast to Pennsylvania, where both the presidential contest and a U.S. Senate seat are up for grabs in battleground races considered close and closer, noted Harrison, the president of the New Jersey Political Science Association.

Harrison said all but one congressional incumbent from New Jersey is certain to easily return to office.

The one race is in the 5th District, the extreme northwest corner of the Garden State, where the seat is held by Republican Scott Garrett.

Harrison said a challenge by Democrat Josh Gottheimer, a former speechwriter for Bill Clinton, has made this “a national race to watch.”

That’s because “while the Democrats’ chances of taking over the House of Representatives is slim, if they are to do so, they’ll need a win from Gottheimer,” Harrison said.

“The reason we have so few competitive congressional districts is that our districts were drawn in 2011 with an eye to protecting the incumbent – or at least the incumbent’s party,” Harrison said.

She added that drawing safe districts has led to “increased polarization in Congress by members who, virtually assured of re-election, have no reason to compromise or moderate their views.”

Harrison said the question allowing the expansion of casinos to North Jersey seems likely to fail.

Harrison did not have an opinion on a second question that would dedicate recently hiked fuel tax funds to transportation projects, rather than allowing the funds to funnel into general funds.