By Stephanie Preston, University of Michigan 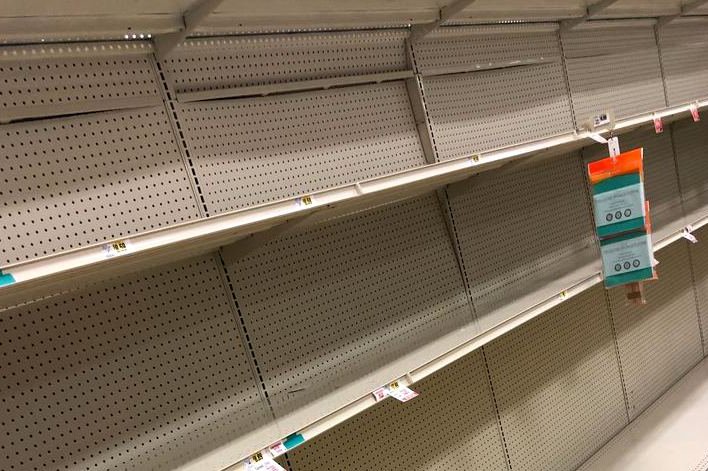 Grocery stores are imposing buying limits after new coronavirus restrictions caused a surge in demand on Thursday. In Philadelphia, Giant, Acme, Fresh Grocer and ShopRite scrambled to keep up with the so-called "panic-buying" as thousands of people grabbed much more than hand sanitizer and toilet paper. Above, an empty paper product aisle at a New Jersey grocery store.

The media is replete with COVID-19 stories about people clearing supermarket shelves – and the backlash against them. Have people gone mad? How can one individual be overfilling his own cart, while shaming others who are doing the same?

As a behavioral neuroscientist who has studied hoarding behavior for 25 years, I can tell you that this is all normal and expected. People are acting the way evolution has wired them.

The word “hoarding” might bring to mind relatives or neighbors whose houses are overfilled with junk. A small percentage of people do suffer from what psychologists call “hoarding disorder,” keeping excessive goods to the point of distress and impairment.

But hoarding is actually a totally normal and adaptive behavior that kicks in any time there is an uneven supply of resources. Everyone hoards, even during the best of times, without even thinking about it. People like to have beans in the pantry, money in savings and chocolates hidden from the children. These are all hoards.

Most Americans have had so much, for so long. People forget that, not so long ago, survival often depended on working tirelessly all year to fill root cellars so a family could last through a long, cold winter – and still many died.

Similarly, squirrels work all fall to hide nuts to eat for the rest of the year. Kangaroo rats in the desert hide seeds the few times it rains and then remember where they put them to dig them back up later. A Clark’s nutcracker can hoard over 10,000 pine seeds per fall – and even remember where it put them.

Similarities between human behavior and these animals’ are not just analogies. They reflect a deeply ingrained capacity for brains to motivate us to acquire and save resources that may not always be there. Suffering from hoarding disorder, stockpiling in a pandemic or hiding nuts in the fall – all of these behaviors are motivated less by logic and more by a deeply felt drive to feel safer.

My colleagues and I have found that stress seems to signal the brain to switch into “get hoarding” mode. For example, a kangaroo rat will act very lazy if fed regularly. But if its weight starts to drop, its brain signals to release stress hormones that incite the fastidious hiding of seeds all over the cage.

Kangaroo rats will also increase their hoarding if a neighboring animal steals from them. Once, I returned to the lab to find the victim of theft with all his remaining food stuffed into his cheek pouches — the only safe place.

People do the same. If in our lab studies my colleagues and I make them feel anxious, our study subjects want to take more stuff home with them afterward.

Demonstrating this shared inheritance, the same brain areas are active when people decide to take home toilet paper, bottled water or granola bars, as when rats store lab chow under their bedding – the orbitofrontal cortex and nucleus accumbens, regions that generally help organize goals and motivations to satisfy needs and desires.

Damage to this system can even induce abnormal hoarding. One man who suffered frontal lobe damage had a sudden urge to hoard bullets. Another could not stop “borrowing” others’ cars. Brains across species use these ancient neural systems to ensure access to needed items – or ones that feel necessary.

So, when the news induces a panic that stores are running out of food, or that residents will be trapped in place for weeks, the brain is programmed to stock up. It makes you feel safer, less stressed, and actually protects you in an emergency.

At the same time they’re organizing their own stockpiles, people get upset about those who are taking too much. That is a legitimate concern; it’s a version of the “tragedy of the commons,” wherein a public resource might be sustainable, but people’s tendency to take a little extra for themselves degrades the resource to the point where it can no longer help anyone.

By shaming others on social media, for instance, people exert what little influence they have to ensure cooperation with the group. As a social species, human beings thrive when they work together, and have employed shaming – even punishment – for millennia to ensure that everyone acts in the best interest of the group.

And it works. Twitter users went after a guy reported to have hoarded 17,700 bottles of hand sanitizer in the hopes of turning a profit; he ended up donating all of it and is under investigation for price gouging. Who wouldn’t pause before grabbing those last few rolls of TP when the mob is watching?

People will continue to hoard to the extent that they are worried. They will also continue to shame others who take more than what they consider a fair share. Both are normal and adaptive behaviors that evolved to balance one another out, in the long run.

But that’s cold comfort for someone on the losing end of a temporary imbalance – like a health care worker who did not have protective gear when they encountered a sick patient. The survival of the group hardly matters to the person who dies, or to their parent, child or friend.

One thing to remember is that the news selectively depicts stockpiling stories, presenting audiences with the most shocking cases. Most people are not charging $400 for a mask. Most are just trying to protect themselves and their families, the best way they know how, while also offering aid wherever they can. That’s how the human species evolved, to get through challenges like this together.