Developed by a University of Pittsburgh Medical Center team, it is based on previous coronavirus studies 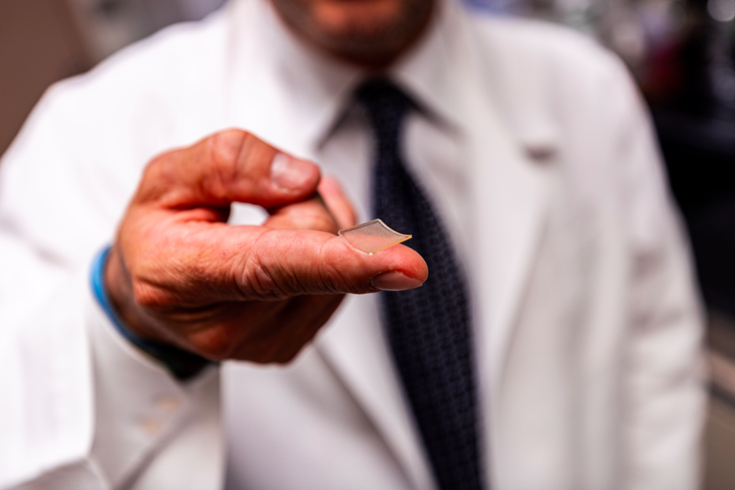 Researchers seek FDA approval for clinical trials for a potential COVID-19 vaccine developed at the University of Pittsburgh Medical Center. The SARS-CoV-2 vaccine was created using past research on the SARS and MERS coronaviruses.

A potential vaccine for the novel coronavirus has been developed by researchers at the University of Pittsburgh Medical Center, whose peer-reviewed work has been submitted to the FDA for approval of a human clinical trial.

The SARS-CoV-2 microneedle vaccine, in progress since Jan. 21, relies on previous research conducted in response to the SARS and MERS epidemics.

Delivered through a Velcro-like patch with 400 tiny needles, the vaccine deploys the spike protein feature of the coronavirus to create an antibody response.

"In our vaccine, the spike protein is actually the target for the antibodies that we hope to elicit," said Louis Falo, professor and chair of dermatology at Pitt's School of Medicine. "This protein is very important for the virus to enter human cells. Our goal is to use a piece of that spiked protein so that we are able to induce antibody responses to block that interaction, so that the virus can't enter the cell."

The researchers published their findings from a trial on mice in The Lancet journal EBioMedicine. It is the first study on a COVID-19 vaccine candidate to be published after critique from scientists at outside institutions.

In the trial on mice, the researchers were able to produce the desired antibody response within about two weeks of administering the vaccine. While the mice haven't been tracked long term, the researchers note that in a previous animal study of the MERS-CoV vaccine, the mice's immune systems created antibodies to neutralize the virus for at least a year.

They are seeing similar antibody levels in mice that have been given the current SARS-CoV-2 vaccine.

Falo said UPMC is working with all relevant regulatory bodies and is hopeful clinical trials could begin on an expedited timeline, possibly in the next few months.

"Testing in patients would typically require at least a year and probably longer," Falo said. "This particular situation is different from anything we've ever seen, so we don't know how long the clinical development process will take. Recently announced revisions to the normal processes suggest we may be able to advance this faster."

Additionally, the SARS-CoV-2 microneedle vaccine maintains its potency even after being thoroughly sterilized with gamma radiation. The researchers said this is critical for making a product that's suitable for use in humans.

Falo explained that the vaccine is designed for safety and to limit the potential for harmful exposure, as occasionally can happen with flu shots.

"This vaccine is designed to be safe in part because it delivers very low doses of antigen, much lower doses than the traditional flu vaccine," Falo said. "Secondly, it delivers that antigen to a very confined space within the skin so that it's very unlikely we would see any type of systemic responses that have been seen with some patients and the flu vaccine."

The White House this week estimated between 100,000 to 240,000 Americans could die, even if effective policies are followed to mitigate the spread of COVID-19.

The full press conference from UPMC researchers can be viewed below.