Could the Eagles use a little late-game adversity for a change?

You know that things are going really, really, really well when one of the concerns about a football team is that they are blowing out everyone they play. However, in a city where we are used to inevitable failure, many have wondered whether the Eagles would be better served having a late-game scare or two heading into the playoffs.

Doug Pederson was asked about that theory, and he apparently buys it. Or maybe he's just bored during the fourth quarter of all these blowout wins.

"It's a valid point and the concern sometimes as a coach is you'd rather have more close games than having to fight and scratch and kind of pull one out, like say, the Giants game earlier in the season," he said.

"But listen, it is what it is. (Give) our guys credit for getting out to big leads. It's great that our players do that. The execution is there. Are there things that we have to fix and tighten up? Sure do. But at the same time, when you can build that lead and then just let your defense take over with the pass rush and things of that nature, it's fun to watch and fun to be a part of.

"But yeah, you would like to – and I think this stretch of games coming up is going to challenge our team that way. That's why I embrace these next couple of weeks and [there is] no greater time than the present."

The Eagles have not faced any real adversity late in a game since way back in Week 6 against the Carolina Panthers, and even in that game, they scored a TD to go up by 12 just five seconds into the fourth quarter.

On ESPN's game recap pages, they have graphs showing the win probability as the game progresses. Here is what the Eagles' win probabilities have looked like since the Carolina game:

The final score was 34-24, but it wasn't that close, as the Skins got a garbage-time touchdown late in the game. The Eagles led by 7 heading into the fourth quarter, with the ball, and they scored early in the quarter to go up 14. 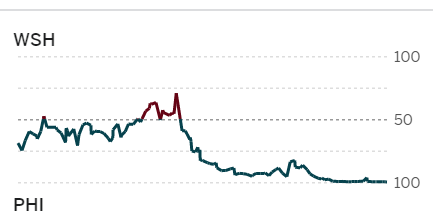 The Eagles jumped out to a 20-0 lead. In bad weather conditions, with C.J. Beathard as the opposing quarterback, this game was never in doubt.

The Eagles led 31-9 at the half and then poured on two more TDs in the third quarter to make it 44-9 heading into the fourth quarter. 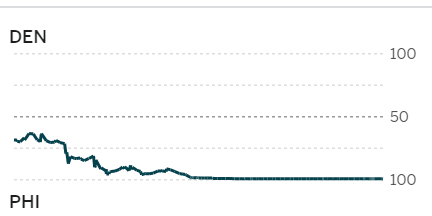 The Cowboys held a 9-7 halftime lead, but after some halftime adjustments (the idea to just run it down their throats), the Eagles quickly took command in the third quarter, going up 23-9 heading into the fourth, and turning it into a blowout. 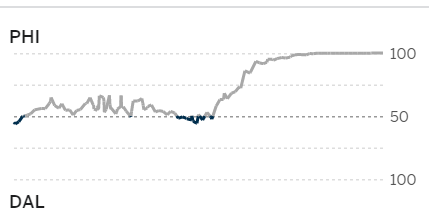 The Eagles led 24-0 at the half, but this game was over before the Bears even boarded the airplane for Philly. 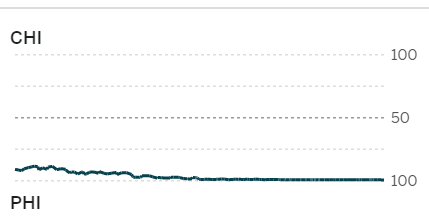 As Pederson noted above, the Eagles will be facing a pair of teams (the 7-4 Seahawks and 8-3 Rams) over the next two weeks, on the road, that are better than the opponents they've been blowing out. Perhaps the Eagles will be forced to make a play in the fourth quarter for a change.