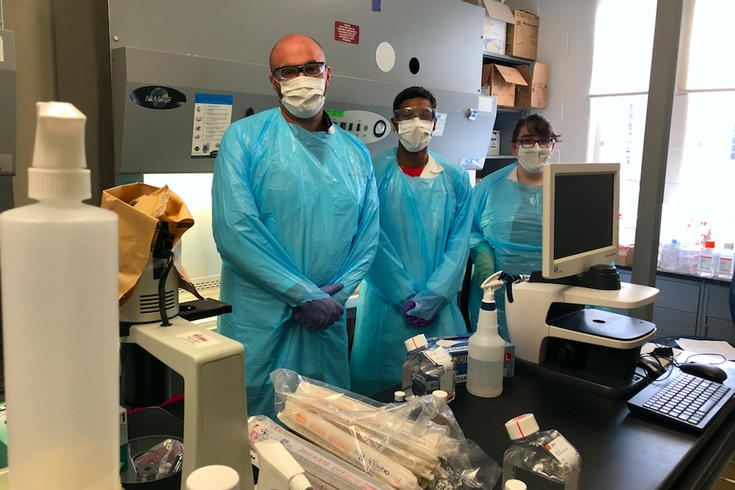 The coronavirus pandemic thrust it into practice.

The two graduate students and a pair of instructors have spent the last several weeks holed up in a small lab, producing viral transport media – a buffer and protein that preserves COVID-19 test samples as they are delivered to laboratories for analysis. VTM is essential to ensuring the accuracy of the test results. And it's in high demand – both within the Jefferson Health system and elsewhere in the United States.

"We've learned quite a bit about the manufacturing process of these things," Robinson said. "But it's one thing to learn about it and it's a completely other thing to get hands on and do it, to be able to see the intricacies that go into (it). It's a large production line that we're doing with four people."

The group already has filled more than 6,250 test tubes with VTM. The group set out to produce 10,000 units but it has the capacity to produce 18,000 – and likely will. The VTM components are being used within the Jefferson Health system, which is testing about 700 people a day.

"We're here and ready to go beyond that if the need continues," said Biotechnology Program Director Scott Gygax, who spearheaded the effort. "It just depends on how the testing numbers are looking."

The demand for COVID-19 testing will not subside soon. Many states, including Pennsylvania and New Jersey, have pinned their reopening plans on having adequate testing capacity. And President Donald Trump has called for the nation's testing capacity to reach 2 million Americans per week by the end of May – though many health experts say that figure needs to double.

COVID-19 testing requires the use of a nasal swab to collect a patient sample. The swab is then placed into a tube containing VTM, essentially freezing the virus in its current state. That helps ensure accurate test results.

But tremendous efforts also are taken on the front end to make certain that the VTM itself is sterile. Any contamination could skew the test results.

Jefferson team members spray themselves up to the wrist in alcohol, aiming to kill any bacteria or viruses. They conduct regular cleanings of their workspace. And all of their VTM batches must pass sterility testing and be validated. 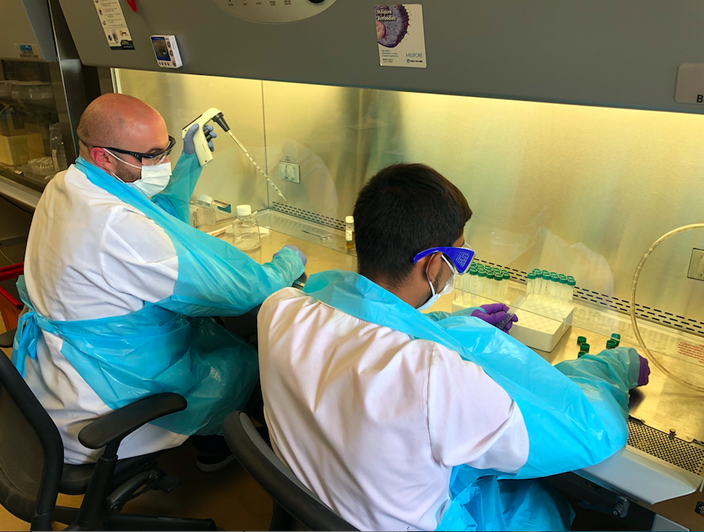 A NEED FOR PERFECTION

Sean Chadwick, a biotechnology instructor, and Pendergast have to remove each test tube cap without touching the inside of the tube before filling it with VTM and recapping it, ensuring it remains sterile. Robinson documents the entire process, even initialing every time a cap is removed.

It's a repetitive process. Some might even find it monotonous. But it's a critical component of the COVID-19 response, one that requires precision and unyielding attention.

"Occasionally things seems easy, but you have to do it perfect every single time – and you have to do it upwards of 18,000 times," Chadwick said. "A bacteria, if it got in (the tube), could grow and outcompete the virus. Then, there's a lot of bacterial DNA which could interfere with the extraction or the ability to detect the virus in the hospital. And that's exactly what we don't want."

The students' abilities to successfully take on such a vital project is evidence of their training, Chadwick said. The biotechnology program aims to equip its students with a versatile tool belt, enabling them to quickly master new skills.

"We were asked to do this and with no hesitation, we both said yes," Pendergast said. "It was just an awesome opportunity. Just to be able to go and help out and do all this stuff was another thing that drove us to want to do this."

The team is a small cog in Jefferson's effort to identify and treat COVID-19 patients. Even at the university, several other departments also played a role in getting the VTM production off the ground.

It's easy for some to view the biotech world as a "Wild West" where scientists are simply free to experiment, Chadwick said. But its value is being recognized amid the coronavirus pandemic. And the group is proud to be contributing at a time of great need.

"To be able to produce something that's at such a high level that the hospital is begging for more, that they can put directly into use to help patients, it's incredible," Chadwick said. "That's unprecedented, but it takes creativity. We have this known shared skillset in biotech to be adaptable. And that's what we've taught all of our students."