'Coywolf' sightings are on the rise in Roxborough 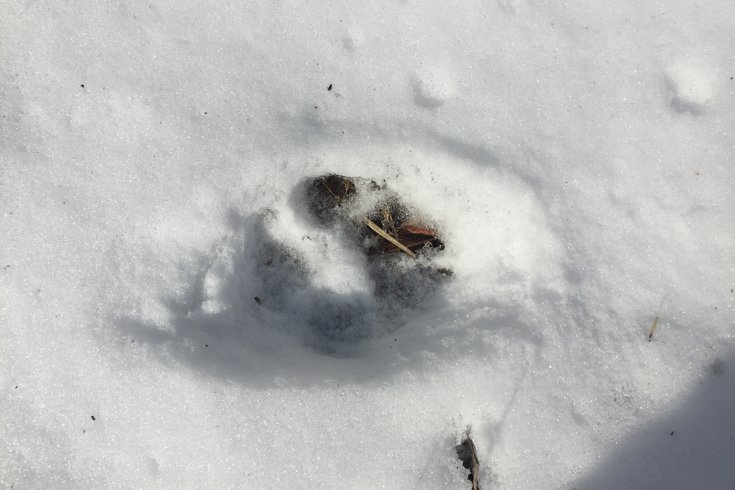 Canine footprint, photographed in Roxborough in March 2017, appears to belong to a coyote.

If you happened to catch the final episode of "Planet Earth II" on BBC America, you're well aware that all types of wildlife have expertly adapted to thrive in the cities that rise and continue to expand across the globe.

Guess what? We might have some fanged friends lurking in our own backyard.

A couple of years ago, we reported on the rapid emergence of "coywolves" in the Northeast United States. Some biologists believe deforestation and hunting helped drive these hybrid canines down to the northeastern states from Canada. Interbreeding between farmers' dogs and wild coyotes produced a fierce, all-terrain predator whose numbers, experts estimate, have risen into the millions.

An official species has not yet been declared, but the inheritance of DNA from dog breeds such as Doberman pinschers and German shepherds may have created a genetic and morphological divergence significant enough to separate them from their ancestors.

Several eyewitness accounts and a recently surfaced photograph of a paw print now strongly indicate that coywolves are dwelling in the Roxborough section of the city.

In a blog post at the Schuylkill Center for Environmental Education, executive director Mike Weilbacher explains that he has been receiving calls about coyotes and eyewitness reports for the past few years. Residents are rightly concerned that the animals pose a threat to pets. They can take down small deer on their own and even hunt moose in packs. In fact,  a string of coyote sightings raised similar fears in Cheltenham Township last summer, prompting police to advise residents to keep food inside and properly seal trash cans.

In January, across the Delaware River, a man in Washington Township was attacked by a coyote while walking his dog on the popular Columbia Trail. It was broad daylight. The victim suffered two bight but was able to fight off the attacker with a stick. The coyote was euthanized and the man was tested for rabies.

"What’s different now is that coyotes are acclimating themselves to suburbs and big cities, where they can den under abandoned properties and hunt mammals like raccoons, opossum, rats, and mice, while supplementing their diets with fruits," Weilbacher wrote. "Chicago has already done a coyote count; they’ve been seen in Central Park."

The evidence in our neck of the woods is beginning to mount. Weilbacher analyzes the photo above, taken shortly after winter storm Stella, and concludes it is very likely a coyote print.

"This track clearly shows two forward toes with claws that point forward and are close together, a diagnostic key separating coyote tracks from dogs, as the latter have front toes that are more splayed and point in different directions," Weilbacher wrote.

Weilbacher describes the advent of these predators as an example of "evolution right before our eyes," taking place within the span of a few generations. He points out that while coyote biology is controversial, a consensus is growing that this "eastern dog" is bigger and clearly distinct from the western coyotes who have long been targeted, unsuccessfully, for eradication.

If you happen to live in the Roxborough area, be on the lookout. You can report any new sightings to the Schuylkill Center for Environmental Education.