NTSB: No preflight checks by Katz crew in 98 percent of flights

The crew had a "long-term pattern" of failing to complete flight control checklists, Vice Chairwoman T. Bella Dinh-Zarr said in an opening statement of an accident review meeting.

She said with the Gulfstream's "gust lock" engaged as it hurtled down the runway, the plane "cannot take off safely." The gust lock prevents various flight controls, like the rudder and aileron, from moving and being damaged by winds while the plane is on the ground.

The NTSB also faulted the manufacturer, Gulfstream, and the Federal Aviation Administration for not assuring that the gust lock's locked position would have prevented any attempt at a takeoff by the flight crew.

The gust lock was engaged after the plane had landed in the Boston area, according to an NTSB investigator. The crew, he said, failed to do complete flight checks "98 percent of the time" in its previous 175 takeoffs.

The pilot repeatedly cried out, "The lock is on," before shouting, "I can't stop it." 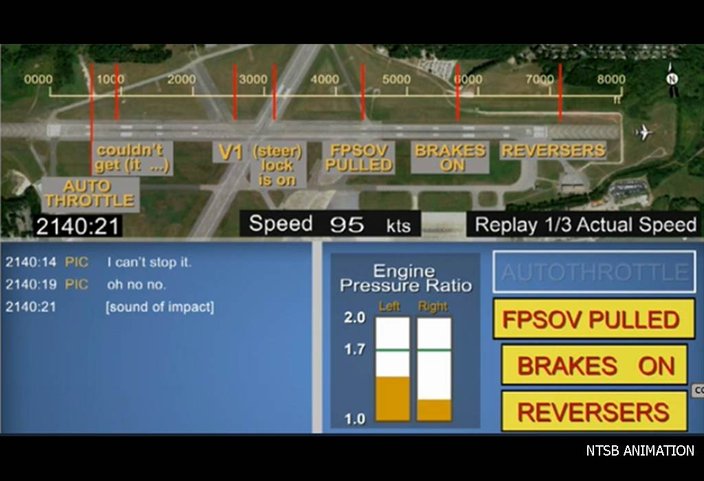 This animation by the National Transportation Safety Board, shown at Wednesday's board meeting, provides a timeline for the seconds leading up to the plane crash on May 31, 2014, in Bedford, Mass. (Source: NTSB)


Another NTSB investigator said the routine failure to perform preflight checks is a "procedural drift" that crews who routinely fly together over long periods of time are prone to fall into. The crew did just two full checks out of 175 examined by the NTSB. Partial checks were done sometimes.

"It appears that this, from my perspective, was plain and simple a case of pilots intentionally disregarding procedures," said NTSB member and pilot Robert L. Sumwalt III.

"There are so many things about this accident that bother me," added Sumwalt, who has operated a corporate flight service in his career.

He pointed out that the equipment and the crew were rated as among the best in the industry, but the failure to do flight checks changed that equation.

Sumwalt also said if the pilots had immediately shut off power when they noticed an issue, the plane could have safely stopped. Instead, the crew used precious seconds trying to troubleshoot the issue before pulling the power shutoff too late to save the aircraft.

Sumwalt introduced a new finding that the FAA had "missed an opportunity to detect insufficiencies" in the gust-lock system because it relied solely on engineering drawings and not field testing. He and two additional board members approved that finding.

The crash occurred on the night of May 31, 2014, after the jet accelerated down the runway at Hanscom Field in Bedford, Massachusetts. The plane never lifted off the runway and all aboard died.

Katz, who was 72, died just four days after winning an auction for ownership of The Inquirer, The Daily News and Philly.com.

Katz had flown with Asbell, Dalsey and Leeds from Cherry Hill earlier that Saturday to attend a social event in the Boston area.

The jet was scheduled to fly to Atlantic City International Airport – Katz owned radio stations at the shore and had a house there – when it crashed.

The NTSB found that the accident itself was survivable, but the resulting fire blocking an exit made it impossible for those aboard to escape the plane.

The preliminary NTSB report in June 2014 suggested pilot error likely was a critical factor in the crash. The experienced crew did not appear to have performed a preflight check that would have alerted them to an issue with the jet's gust-lock system.

A further review showed the crew was routinely lax about doing checks before takeoff.

In April 2015, the NTSB released a cockpit voice recorder transcript that revealed one of the pilots had repeated the phrase, "The lock is on," followed by, "I can't stop it" and "Oh no no" just prior to the crash.

Katz, who rose to prominence in business and law, was a former owner of the New Jersey Devils and Nets.

In recent years, he became increasingly dedicated to charity, donating millions of dollars to educational institutions, including Temple University, the Dickinson School of Law and Katz Academy, a charter school in the Parkside section of Camden, where Katz lived as a child.