The Dallas Cowboys have themselves another domestic abuse issue 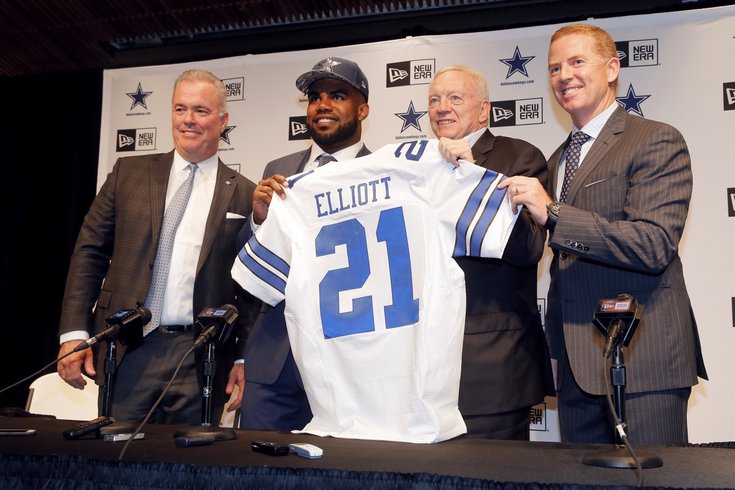 A year ago, the Dallas Cowboys signed defensive end Greg Hardy to a one-year contract worth over $11 million. The move was widely criticized from the outset, as Hardy had previously been convicted of assault, but had the charges dropped on appeal when his victim stopped cooperating with authorities. Criticism of the Cowboys and Hardy only escalated when Hardy continued to be a distraction all season long, at one point painting himself as a victim.

For their troubles, the Cowboys got 35 tackles and six sacks out of Hardy in 2015. He did not re-sign with the team this offseason, and remains a free agent.

Now the Cowboys have a new domestic abuse case on their hands. According to Deadspin, rookie running back Ezekiel Elliott's girlfriend took photos of bruises on her body, and posted them to Instagram.

Elliott was widely hyped leading up to the 2016 NFL Draft, and was selected fourth overall by the Cowboys.

According to TMZ, Elliott's girlfriend filed a report with the Columbus Ohio police department.

The female accuser filed a report with the Columbus PD in Ohio Friday morning ... saying she was assaulted by Elliott -- who she claims is her former live-in boyfriend -- while sitting in the driver's seat of her parked vehicle.

Elliott denied wrongdoing, according to TMZ.

UPDATE: The Cowboys say Elliott has proof that his girlfriend is trying to set him up.

High-ranking #Cowboys source says that Ezekiel Elliott has messages saved on his phone proving his ex-girlfriend is trying to set him up.