State registry shows 37 such animals in Philly suburbs, but none in city 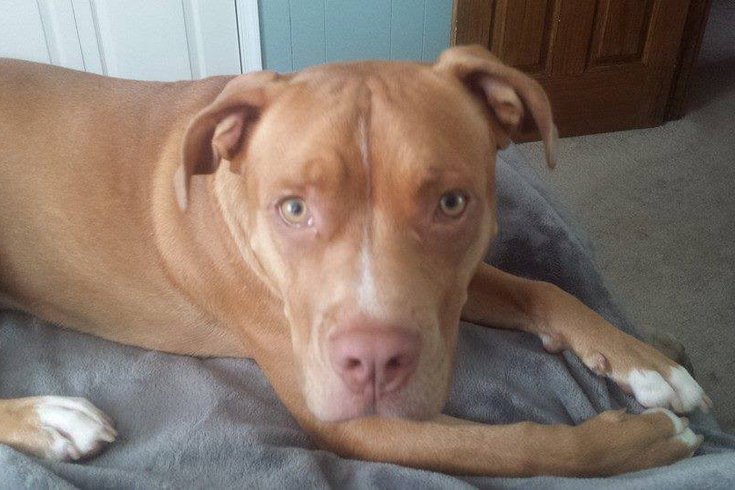 Jackson, pictured above, is a dog declared dangerous by a magisterial district judge.

Pennsylvania law requires dogs that have been declared legally dangerous to be placed on a public registry listing the dog’s owner, address, breed and name.
Residents can scan the list to see whether any of the state’s 513 dangerous dogs – unprovoked animals that have attacked, inflicted severe injury or killed a human or domestic animal – live in their neighborhood.

“A lot of times in situations like this, there are processes and tasks that normally have been handled here [that] may not have been transitioned in an orderly way. It may not have been communicated to the animal control entity.” –David Wilson, Philadelphia’s first deputy managing director for administration

In Montgomery County, residents can see there are a dozen dangerous dogs in their county, including two pitbull mixes at the same address in Wynnewood and two others in Elkins Park. People who live in Chester County would find eight dangerous canines in their county, including three at the same address in Malvern.
All told there are 37 dangerous dogs in Bucks, Chester, Delaware and Montgomery counties.
But don’t expect to find any dangerous dogs listed from Philadelphia. None are included on the state’s registry and a city-specific listing does not exist. By comparison, Allegheny County, which includes Pittsburgh and contains about 64,000 fewer households than Philadelphia, has 157.
Philadelphia animal control officers monitor two dangerous dogs, according to David Wilson, the city's first deputy managing director for administration.
Logan Hall, a spokesman for the Pennsylvania Department of Agriculture, said Friday that the Bureau of Dog Law Enforcement has not been receiving the information from Philadelphia necessary to update the dangerous dog registry.
State law requires Philadelphia, as a first-class city, to report dangerous dog cases to the bureau, which is responsible for publishing the registry.
“The Bureau of Dog Law Enforcement will follow up with Philadelphia City to develop stronger communications between the two groups,” Hall wrote in an email.
For his part, Wilson said, “We look forward (to) taking part in those conversations with the state, Bureau of Dog Law Enforcement and our local public safety partners.”
Neither city nor state officials could tell PhillyVoice how long the state has lacked information on Philadelphia’s dangerous dog cases. Nor could they say who is responsible for reporting those cases. Hall said he would seek that information this week.
Wilson said he, too, was uncertain why the city cases did not appear on the state registry. He said he was checking with several entities to determine how the city reports that information.
The state eliminated Philadelphia’s dog warden around 2011, a factor that may have contributed to the lack of information, Wilson said.
“A lot of times in situations like this, there are processes and tasks that normally have been handled here (that) may not have been transitioned in an orderly way,” Wilson said. “It may not have been communicated to the animal control entity.”
Philadelphia contracts animal control operations to a city business, Animal Care and Control Team (ACCT).
Tara Schernecke, assistant director of operations for ACCT, said earlier this month that the agency does not maintain a dangerous dog registry accessible to the public, but that cases are reported to the state Department of Agriculture when a judge declares a dog dangerous.
Schernecke did not return a call Friday seeking clarification on whether ACCT is responsible for reporting the information.
Both Wilson and Schernecke said animal control officers make visits to the residences of the city's dangerous dog owners, verifying that the owners meet the requirements to house a dangerous dog.
“In the past, it’s been with a dog warden,” Wilson said. “That’s how the law reads. Right now, it’s in our work order system. As it comes up, the animal control officers go to the address and make their visit and make their report.”
The city has had nine dangerous dog cases since 2012, he said, but only two remain active. According to the ACCT's website, about 300,000 households in Philadelphia have dogs.
ACCT has not fielded any public requests pertaining to the dangerous dogs registry in at least three years, Wilson said.

To be declared dangerous, a magisterial district judge must determine that an unprovoked dog has attacked, inflicted severe injury or killed a human or domestic animal while off its owner’s property.
The owner receives a summary offense and essentially is faced with a choice to euthanize the dog or adhere to a set of strict and costly regulations. If the dog is transferred to another owner, the new owner must meet the regulations. Another incident could bring misdemeanor charges.
The state received 163 notifications of dogs deemed dangerous last year, said Kristen Donmoyer, director of the Bureau of Dog Law Enforcement in Harrisburg. It received 162 notifications in 2013 and 176 in 2012.
About half of the owners opted to euthanize their dogs, according to state officials.
Regulations for maintaining a dangerous dog include a $500 annual registration fee, restitution and a $50,000 liability insurance policy to pay for any injuries inflicted by the dog. The dog also must have a microchip implanted and be spayed or neutered.
The law requires strict maintenance measures, too.
The owner must post warning signs on the property, confine the dog to a proper enclosure and keep it muzzled and leashed when off the owner’s property.
Once a dog is declared dangerous, it cannot lose that distinction except through a legal appeal. The owner must notify the state if the dog dies or is transferred to a new owner.
“Once it has the label of the dangerous dog, there is just a label of dangerous dog,” Donmoyer said. 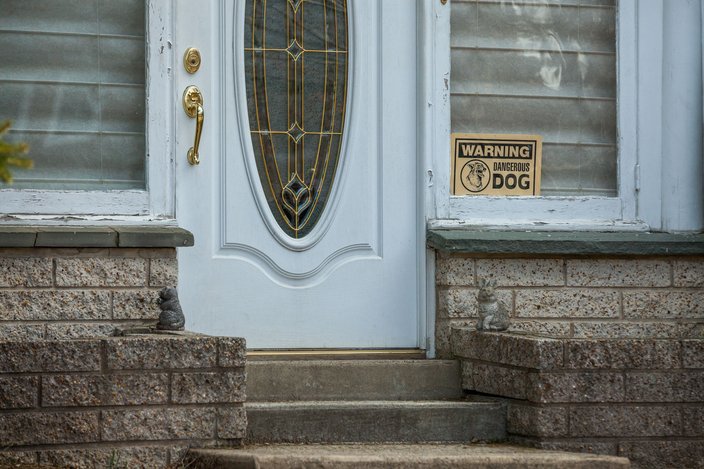 Owners of dogs that have been declared dangerous by a magisterial district judge are required by the state to post signage warning that a dangerous animal resides on the property, like this one in Ardmore, Montgomery County. (Thom Carroll / PhillyVoice.com)

'I WASN'T ABOUT TO PUT MY DOG DOWN'

Owning a dangerous dog is costly to the owner and brings a tough lifestyle for the animal, said Crystal Schaefer, a Levittown, Bucks County, woman whose family owns three dogs, including one that is deemed dangerous.
Jackson, an American bulldog and red nose pitbull mix, scurried out of her house one night last September when visitors arrived at the door, Schaefer said. It ultimately bit another dog out for a walk with a neighborhood couple.
Jackson had never shown any aggression to her two children or two pugs, Schaefer said. The dog has not shown aggression since, Schaefer said, adding that neighborhood children frequently visit her home.
“I wasn’t about to put my dog down,” said Schaefer, who insists the dog is not dangerous and that she is a responsible dog owner. “I didn’t feel that he deserved that.”
Schaefer said she does not want to give up Jackson, but maintaining such a dog is challenging. Her family is trying to find Jackson an out-of-state home where restrictions might be less strict.
“We did not want our family to go through this,” Schaefer said. “It’s killing us. I don’t wish this upon anybody, the struggle. … It’s been emotional. I’ve gone through a lot of ups and downs and so have my kids.”

DANGEROUS DOGS IN THE SUBURBS

Jackson is one of 37 dogs declared dangerous living in the Philadelphia suburbs. Most of those dogs are larger breeds.
American pit bull terriers represent 11 of those dogs. There are also three German shepherds, two rottweilers and two Labrador retrievers. 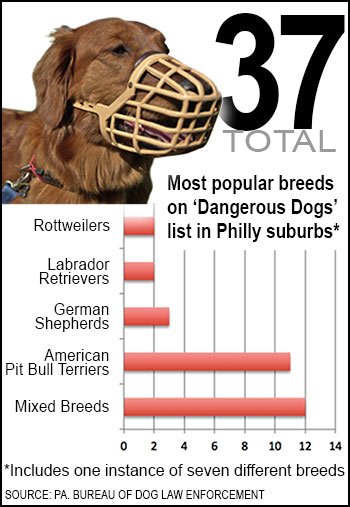 There are a dozen mixed breeds, many of which include a pitbull mix, and seven other breeds, including a mastiff, goldendoodle and Rhodesian ridgeback.
Marisa Scully, a certified professional dog trainer for Philly Dog Training, said any dog can be dangerous, but noted some breeds tend to be more aggressive. Temperament is determined mostly by genetics and early life socialization, Scully said.
Pitbulls, one of the most frequent breeds listed in the state registry, have a history of being bred to be aggressive, Scully said. They also are popularly found in shelters, where they don’t necessarily receive the early life socialization they need.
Plus, Scully said, many people don’t recognize the subtle signs displayed by pitbulls when they become agitated. What might appear as playful behavior, actually might be aggression, she said.
“If you picture a German shepherd peeling his lips back, it’s pretty easy to avoid being bit by one of those dogs,” Scully said. “Pitbulls are more subtle. … Because they don’t have all these gnashing, snarling teeth, people tend to go further and further with them without realizing that they’re agitating them.”
Scully has not worked with any dogs legally declared dangerous, but has trained many that have shown signs of aggression.
The first step toward improving a dog’s behavior, Scully said, is getting the owner to acknowledge that they may always have some limits.
“Any dog can be dangerous,” Scully said. “If a dog has shown and displayed potentially dangerous (signs), getting past the stigma is the first step to getting people to acknowledge (they need) to make changes.”