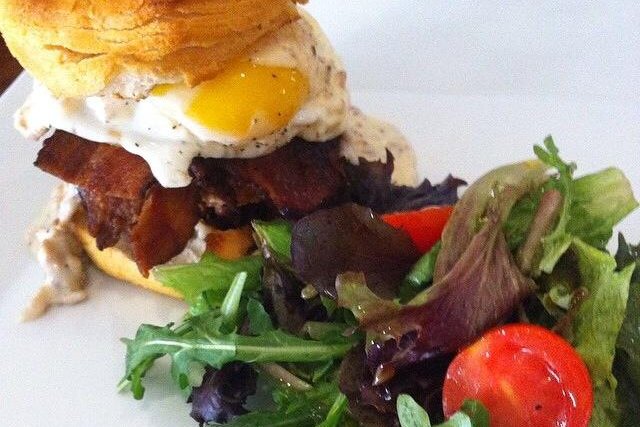 If you live on East Passyunk Avenue, you might've noticed that Dante's Espresso Bar Cafe opened last summer with barely a slice of the hoopla that surrounds, say, a Palladino's or Laurel opening.

But that doesn't mean the lack of fanfare was warranted.

To be sure, Dante's Espresso Bar was added to an already strong lineup of coffee-and-brunch hybrids on the Avenue: Chhaya, B2, Black & Brew, Plenty, Capogiro -- the list's not a short one, making it a non-shocker that Dante's might have blended in a bit. But, thanks to a combination of a few factors (and a few changes), it might be poised to grab some new patrons.

Danyele Tuzzio is the manager of Dante's and daughter of the cafe's owner, Pasquale DiGiulio -- who, of note, recently had a bone marrow transplant after a bout with cancer and, she told PhillyVoice.com, is recovering nicely and will be back in the shop soon. Tuzzio said that, after opening eight months ago, Dante's quickly realized it was tackling too much, particularly with the restaurant portion of the business, which then served a full dinner menu.

"There are a lot of restaurants on the Avenue, and we realized we have to establish who we are first," she said. "Now, we have an in-house baker with desserts, making specialty cakes, cupcakes, muffins -- we serve just about every [dessert] now."

That baker is Rebecca Rosario, who owns Puddin's Cake Corner and, as of last month, shares the space with and bakes for Dante's. In addition to specialty cakes (see the Facebook photo lineup), she also serves twists on classic sweet treats -- for example, a blueberry-lemon cheesecake bar.

To address Tuzzio's former point, though, here's who Dante's is, and what might make it stand out from the bunch -- if not in menu offerings, then in presence: Dante's is a family-run business in the most absolute, truest sense of the label.

The backstory: Tuzzio's younger brother passed away from a cancer diagnosis eight years ago. The long-term dream for him, she said, was always to open a restaurant -- so, going out on a limb last year, her family collectively decided to make it happen for him.

"We originally were going to only do coffee with desserts, but we went all out because of him," she said. "He loved to go out to eat, and I think he really just wanted to own something of his own in Philly. ... He was an amazing person -- we had people show up to his funeral who had met him for all of five minutes."

The restaurant portion of the shop (which serves breakfast and brunch), then, honors her brother.

As for the restaurant's name, she said, it comes from her 9-year-old youngest brother, Dante. "We really just wanted him to feel special," she said. Capping off the "family business" theme, her second-youngest brother also works at the shop, pitching in as part of a loyal group effort while their father recovers from his own battle with cancer.

Don't count out Dante's just yet - if not because of its feel-good backstory, then because of newly popular items like shrimp & grits, a chicken cutlet BLT and, what Tuzzio said is the signature item, the "ultimate biscuit" (pictured above).