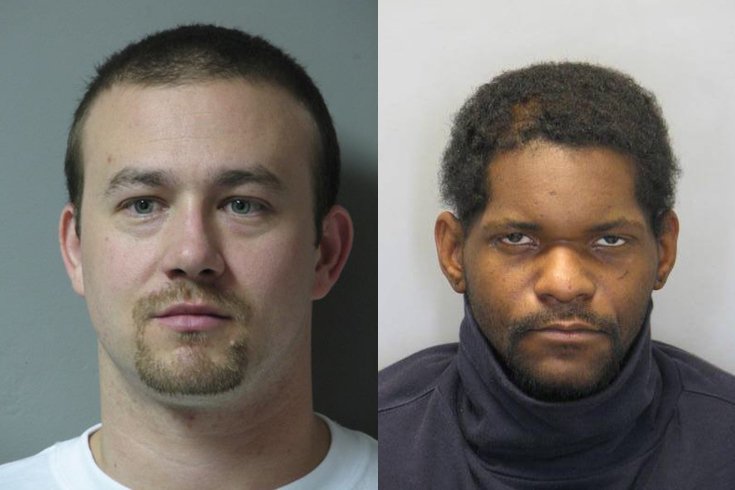 James McCardell, pictured left, and Brian Richardson, pictured right, have been charged after allegedly breaking into a Delaware home. McCardell was shot by a responding state trooper after police say he refused to drop his weapon.

Delaware State Police have charged two men and are seeking another suspect after a Thursday home invasion in which a state trooper fired his weapon, striking one of the alleged robbers.

Authorities announced on Saturday formal counts against 39-year-old James McCardell of Colora, Maryland, and Brian Richardson of Philadelphia, while the trooper who discharged his firearm has been placed on administrative leave.

According to police, a trooper responded to the report of a robbery at a home located on the 300 block of Salem Church Road in Newark.

Authorities say the trooper found broken glass and was confronted by a man wielding a handgun, who was ordered to drop his weapon by the responding officer.

The suspect ignored, police say, and the trooper shot him in the side of his torso. One other suspect was taken into custody without incident, another fled the scene and the man struck with the gunshot - now identified as McCardell - was taken to the hospital.

Police say the five people living in the home as well as the trooper were unharmed.

McCardell is still at Christiana Hospital in Newark and is in serious but stable condition. He's there under the custody of the Department of Corrections in lieu of a $219,000 secured bond.

Richardson has been committed to the Department of Corrections in lieu of a $518,000 secured bond.

He, along with Richardson, have been charged with the following: two counts of attempted robbery, seven counts of possession of a firearm during the commission of a felony, home invasion, two counts of aggravated menacing, wearing a disguise, conspiracy and two counts of endangering the welfare of child.

The trooper, a three-and-a-half-year veteran of the force, has been placed on administrative leave in accordance with Delaware State Police policy pending the end of an investigation.