In Delco, all-time high turnout anticipated by voters with minds made up 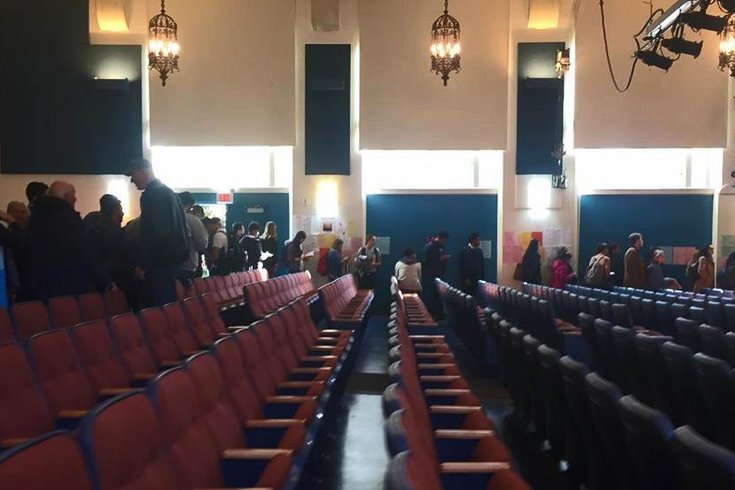 Voters are lined up at the Swarthmore-Rutledge School in Swarthmore, Delaware County, on Tuesday morning.

The gaggle featured all kinds.

Some wore the groggy just-out-of-bed look, while others in business attire nervously checked their watches. Still others had their faces plunged into their cell phones.

There wasn’t much talk.

This line was snaking its way around the main auditorium and down the side aisle of the Swarthmore-Rutledge School, in Swarthmore, Delaware County, just minutes after the polls opened on Tuesday morning to determine the next president of the United States.

Voter turnout throughout Delaware County was high throughout the morning, and polls were anticipated to get even busier during the evening rush hour. Turnout is reportedly so strong that voter turnout in Delaware County could reach 80 percent of the 375,000 active registered voters, which projects into an all-time record of 300,000 voters participating in the presidential election between Democratic candidate Hillary Clinton and Republican candidate Donald Trump.

“That 300,000 figure is a very high number. We’re talking the possibility of being a historical high for the area," said Pete Peterson, spokesman for the Delaware County Republican Party. "We were looking (Tuesday) morning at around 70 percent, and it’s grown since then. This is one of the highest voter turnouts we’re going to have in the history of Delaware County.”

The reason for the high volume is obvious.

“Both sides are represented, and on the Trump side, we’re seeing a lot of people who were never really active before,” Peterson added. “There are a lot of new faces that have volunteered and want to be involved. What I’ve heard in the lines is that a lot of younger women were going to vote for Hillary, but from what I’ve seen, young, white women handing back the literature to the Democratic poller. There could be surprising when it comes to how stereotyped the way some people were supposed to vote. People are really engaged in this election and want their voices to be heard.”

Delaware County figures mightily in the election. If Trump can win Delaware County and the other Philly suburbs – Bucks, Chester and Montgomery counties – he has a good chance of winning Pennsylvania and its 20 electoral votes — something the Clinton campaign realizes well.

Joe Corrigan, the Delaware County Democratic Party spokesman, saw the same rush as his Republican counterparts. Corrigan has been involved in politics for 17 years. He said turnout is on par with the 2008 presidential election between Barack Obama and Republican candidate John McCain, won by Obama, 52.9 percent to 45.7 percent.

George H.W. Bush was the last Republican to win Pennsylvania, in 1988. That was six elections and 28 years ago. Since then, the Keystone State has been blue. Obama won the state in 2008 over McCain by a 10.3-point margin of victory, in a year when Clinton beat Obama in Pennsylvania by 10 points in the Democratic primary. Mitt Romney closed that gap to 6 percent when he ran against Obama in 2012.

“This is the largest turnout I’ve seen in my political career,” Corrigan admitted. “The message that Hillary Clinton has run her campaign on is that we are one, and it’s something that’s resonates with people. It’s hard to overlook the historic nature of this election. We have the possibility of electing the first woman president of the United States. All you have to do is look at Monday night’s rally in Philadelphia for Hillary Clinton. There were over 20,000 people there.”

Corrigan also noted that the amount of information available to voters is unprecedented and far greater than it was even eight years ago. Twitter didn’t become a national social media outlet until 2007, and most people on Facebook were primarily college students when Obama and McCain ran.

“We saw a steady turnout and the evening rush will bring in more,” Corrigan said. “People that are showing up to vote know who they’re voting for. We’re finding they’ve made up their minds before they arrive here. They’re not taking literature from the poll workers and committee people. They’re walking in and casting their vote. I would say 2008 was the last time I saw that.”

Robert Oliver, a Springfield resident, caught a good time to vote. He stood in line with his eight-year-old daughter Kaitlyn and got in between the morning rush and the after-work run on the polls that was anticipated.

“I stood line for about 10 minutes,” said Oliver, who’s in his late-40s. “I went right after people went to work. I fell right in the middle. My daughter gave me up though. There wasn’t a lot of talk in the line, even though my daughter came with me to see to experience what it’s like to vote. She announced to everyone that we were voting for Donald Trump.

Everyone turned around and snickered.”