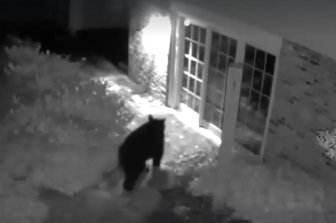 Authorities in Delaware County are working with the Pennsylvania Game Commission to locate and capture a black bear that has been spotted by multiple witness in several towns in recent days. The image above is from a sighting that took place Nov. 29 in Marple Township.

The Pennsylvania Game Commission continues to search for a black bear that has been spotted in several towns in Delaware County over the past few days.

Authorities in Aston, Springfield Township, Haverford Township and Marple Township have all posted on Facebook about the bear sightings, including images and videos.

Game Commission wardens have yet to locate the bear, which appears to be traveling by night and has made stops in residential backyards. Additional sightings were reported in Radnor Township and Collingdale.

Over this past summer, a young black bear was spotted near the SEPTA tracks in the East Falls section of Philadelphia, prompting a search that lasted several days before the bear was corralled in Roxborough.

Anyone who sees the black bear in Delaware County is urged to call 911 to report the sighting to police.