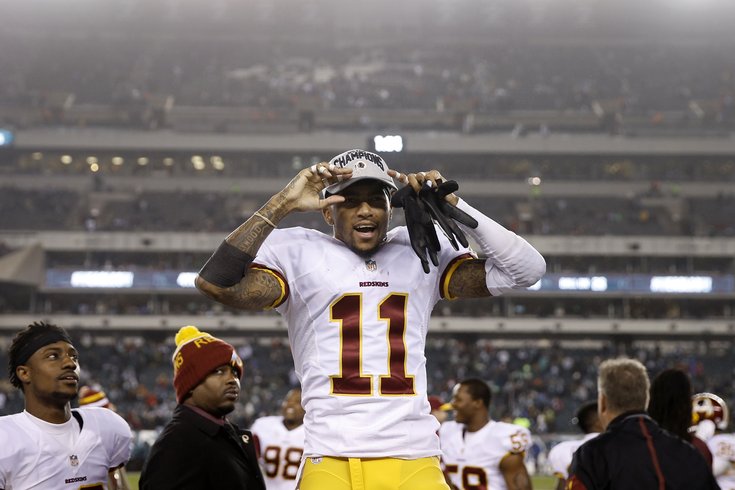 DeSean likes mixing salt with wounds, and I kinda don't blame him.

DeSean Jackson has been quiet about Chip Kelly and the Philadelphia Eagles recently. For example, he did not say anything inflammatory about his former team or coach leading up to the Eagles' and Redskins' Week 16 showdown a couple weeks ago, a game that put the final finishing touches on Kelly's tenure with the Birds. Jackson seemed to be all business in the Redskins' dispatching of the Eagles into the 2015 graveyard.

However, now that the Eagles are squarely in the rear-view mirror, the MMQB's Robert Klemko was able to get Jackson to open up about Kelly, who Jackson thinks got what he had coming to him.

"I’m a firm believer that bad karma comes back on you. When you ruin a team like that, you do things to peoples’ families, you release people, you trade people, you get rid of good players who build something with the community, with the fans, with the kids—to have a guy come in and change up the team like that, I just believe in karma. I don’t have any bad words to say about him as far as what he feels he needs on his roster. But the guys that were on that roster created something special, from Jeremy Maclin to LeSean McCoy to Trent Cole to Todd Herremans and myself and Brandon Boykin; it goes on and on and on. When we were there we were a brotherhood. So for everyone to go their separate ways and to see how it all ended up, it’s a very sad thing."

Some of Kelly's moves made sense, and Jackson found a way to pick the ones that did, such as releasing Cole and Herremans, and getting a fifth-round pick in return for Boykin. However, his overall point isn't wrong. The Eagles unquestionably have a less talented roster now than they did in Jackson's last year with the team, as Kelly's moves as a GM are nearly indefensible.

Jackson's Redskins ended the Eagles' seasons both in 2014 and 2015. Jackson's 2014 release will undoubtedly be a huge part of Kelly's legacy in Philly.