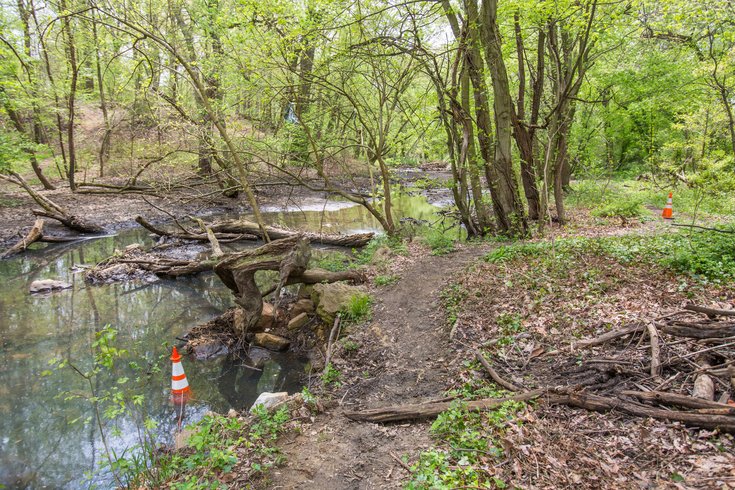 The scene near an inlet to the Cooper River in Haddon Township prior to a visit by the jury in the murder trial of David "DJ" Creato, on Thursday, April, 27, 2017. The orange cones, had been placed by law enforcement officials. The cone at left indicates the location where the body of Creato's son was found, and the cone at right indicates the trail leading from the corner of South Park Drive and Saginaw Avenue.

The jury in the Brendan Creato case on Thursday afternoon visited the scene where the boy's body was discovered the morning of October 13, 2015.

David "DJ" Creato is accused of killing his three-year-old son to further a romance with his then 17-year-old girlfriend, who prosecutors say resented the child. The ex, Julia "Julie" Stensky, is slated to be the first witness when the trial resumes next week.

Court officials said there were no issues during the scene visit, which included Creato, prosecutors and defense lawyer Richard J. Fuschino Jr. of Philadelphia.

No testimony is allowed at crime scene visits under New Jersey guidelines, but cones were placed to mark the path to the creek and a rock where the boy's body was found in a stream flowing into the Cooper River.

The Camden County Superior Court barred the media from going along on the jury visit.

The rock in the stream is 15 yards from where Creato took a cellphone picture just two days before his son was discovered dead, the lead investigator in the case testified Wednesday.

The spot where Creato took the picture on October 11, 2015 was identified by a GPS stamp on the digital photo, Detective Michael Rhoads of the Camden County Prosecutor's Office told the jury.

Rhoads showed the cellphone photograph to the jury Thursday morning. 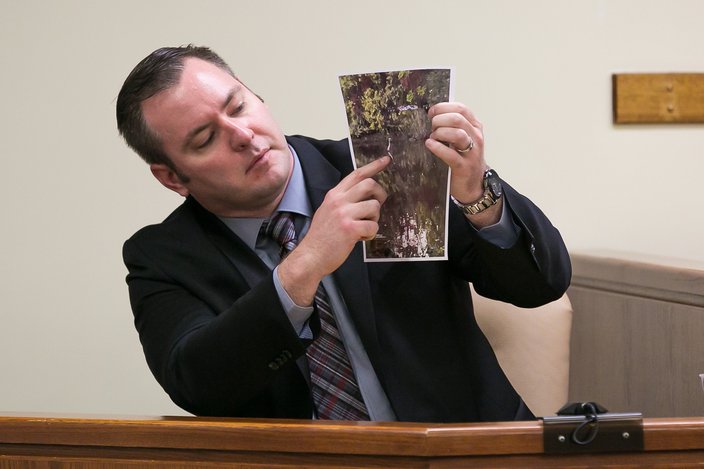 Detective Michael Rhoads of the Camden County Prosecutor's Office holds a photo taken by David 'DJ' Creato just 2 days before Brendan's body was found 15 yards away, as he testified Thursday, April 27, 2017, in Camden.

During an interview with investigators on the day his son's body was found, Creato indicated that he did not go to that part of Cooper River Park, Rhoads testified. Creato also told Rhoads that he had not been to the park in a week.

But the date and positioning data on the cellphone picture appear to prove otherwise. 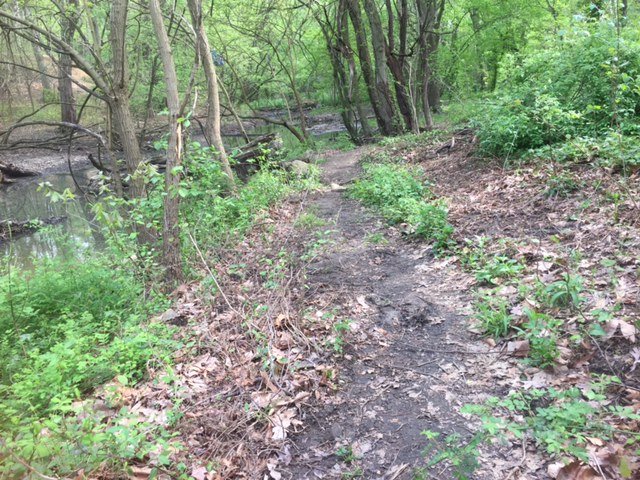 This photograph was taken 15 yards from where Brendan' Creato's body was found. This is where DJ Creato stood when he took a cellphone photograph two days before Brendan was discovered.

The jury's scene visit was bracketed by testimony from Detective Nick Villano, who took photos of the scene – 65 of them – and oversaw the collection of evidence.

Villano testified that Frank Jackson of the County Medical Examiner's Office was present when a detective lifted the boy's body from the rock and handed it to Villano, who placed it in a body bag.

Villano said he was with the medical examiner, Dr. Gerald Feigin, the following day at the morgue for a so-called "second look." The autopsy, done the day Brendan was found, did not confirm a precise cause of death.

Villano also met with Feigin on the following Saturday – four days after the boy was discovered in the creek. The detective took photos as the medical examiner took water samples. It was the first time Feigin had visited the scene, and the day after the state's top medical examiner conducted a third and final autopsy. Like the two others before it, that autopsy was inconclusive.

Feigin first met with Rhoads about the case much later, on October 27, the detective testified late Wednesday. He did not detail their discussion.

Rhoads, who answered questions Wednesday from the prosecution, was cross-examined by defense lawyer Richard J. Fuschino Jr. for less than an hour on Thursday.

Rhoads admitted under cross-examination that "DJ" Creato agreed to every police request on the day his son was found dead.

The detective testified that Creato, who is charged with the murder of his three-year-old son, was interviewed for about 12 hours on October 13, 2015, though he was given several breaks. Creato never asked for a lawyer, consented to a request for his cellphone and provided a DNA sample, the detective told the court.

Creato also told Rhoads about his now-ex girlfriend and her resentment of Brendan, but referred to her as "Julie Spensky," not her actual name, Julia "Julie" Stensky.

Rhoads testified that Creato had agreed during the interview that Brendan going to the park on his own would be unlikely and that his son was afraid of the dark. 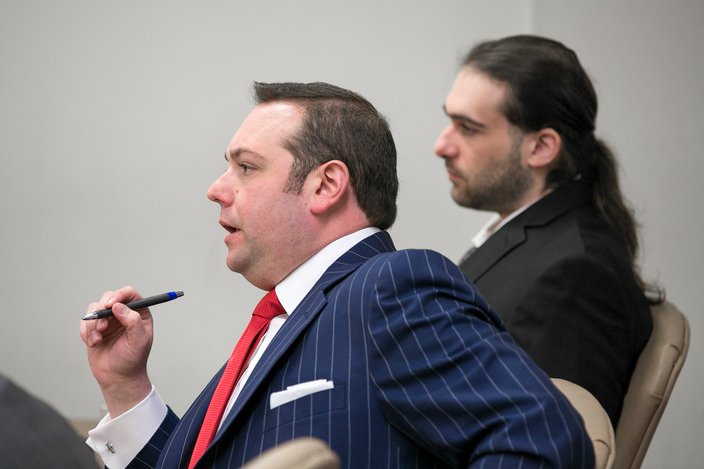 There was a brief discussion of a baby stroller several people had reported seeing on the morning of the search. Creato called police around 6 a.m. to report the boy missing and his body was not found until about 9 a.m.

A stroller was eventually found at an abandoned home in Westmont, the section of Haddon Township where Creato and his son lived in South Jersey, but the detective said he concluded the stroller had nothing to do with the disappearance.

The detective told Fuschino he immediately suspected foul play on the day the child was found dead in a stream in the park, but said it took a week or two before he considered the father a suspect.

Fuschino noted that his client had asked during the interview to see his family, but was not allowed to do so for more than two-and-a-half hours after that request, when the questioning finally concluded around 9 p.m.

Testimony is set to resume at 10 a.m. on Tuesday. Stensky, the former girlfriend, is subpoenaed to appear.

She and Creato had feuded about Brendan from the outset of the relationship, which she had threatened to leave if Creato did not work out a custodial deal which gave him less time with his son and minimized his contact with the boy's mother and his former partner, Samantha Denoto.

Her potential testimony is something of a wildcard.

She has spoken to authorities just once, on the day the child was discovered; she was at her university in New York that morning. She hired a lawyer and canceled a scheduled follow-up interview.

No details from that initial interview were disclosed, but an inflammatory blog post of hers on social media was read aloud in court Wednesday by Rhoads.