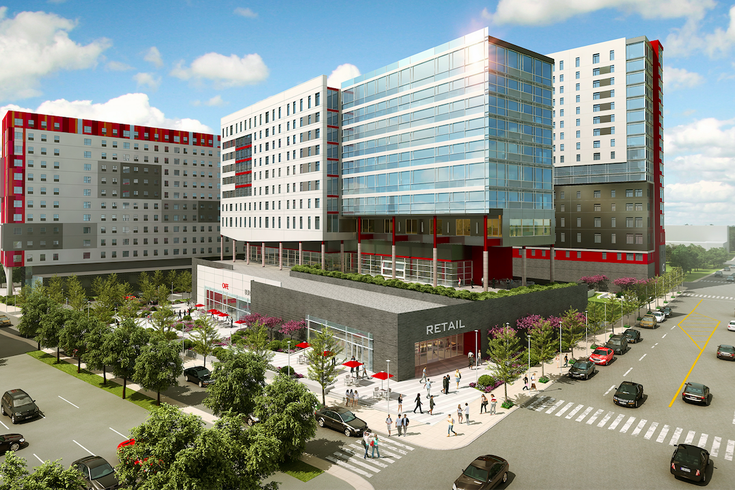 Rendering of second phase of The View at Montgomery, located at 12th Street and Cecil B. Moore Avenue.

As the student population at Temple University expands, real estate on either side of North Broad Street has become a prime target for redevelopment in recent years.

On Wednesday, The Goldenberg Group broke ground on a new student housing community at 12th Street and Cecil B. Moore Avenue, marking the second phase of a project that began with the adjacent View at Montgomery.

The $199 million mixed-use project will feature 984 beds within one-, two-, three- and four-bedroom units. Each of the 368 total residences will come fully furnished, including a dishwasher, flat screen TV and garbage disposal.

“The Goldenberg Group is excited to move forward to fulfill the second phase of this project,” said Kevin Trapper, senior vice president at The Goldenberg Group. “The View at Montgomery has received an incredibly positive reception – both from students and the community. We intend to continue to provide best-in-class student housing to accommodate Temple’s students, and to be a source of positive transformation in the neighborhood.”

The View at Montgomery opened in 2014 and is fully leased and occupied on the commercial and residential sides.

The Goldenberg Group project, to be managed by Asset Campus Housing, is scheduled for completion in summer of 2019, in time for fall semester occupancy.