Worker with developmental disabilities celebrates 12 years on job at Villanova

Susan Gelb is a shining example of the benefits of 'competitive integrated employment,' say experts 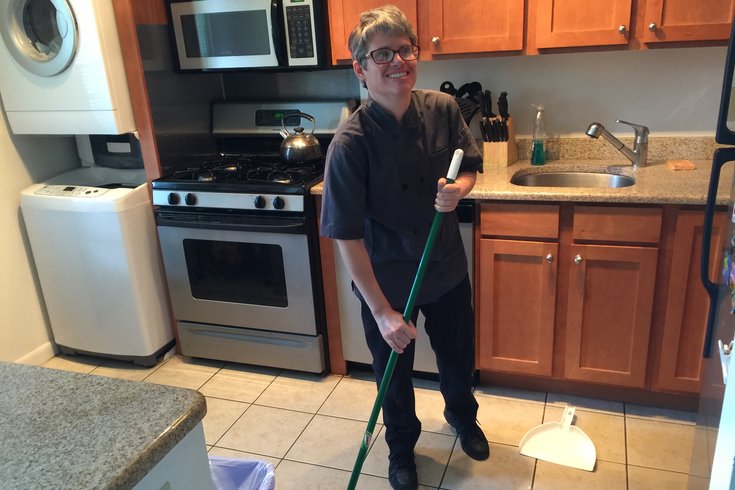 Susan Gelb is developmentally disabled, but thanks to a program that offers living and employment assistance, she is about to celebrate her 12th-year anniversary on the job with Villanova University's dining services.

Several mornings each week, Susan Gelb walks about 10 minutes from the Bryn Mawr apartment she shares with a roommate to catch the Norristown High Speed Line to her job at Villanova University.

The ride takes about 10 minutes, but the 48-year-old woman's commute represents a lifelong journey that can be held up as a shining success, and beacon of hope for others.

Gelb, who works for the university’s dining-services program at Belle Air Terrace in the Connelly Center, is developmentally disabled. Years ago, few would have thought she’d be able to navigate the world on her own as well as she has.

At a time when the commonwealth pushes to help the disabled find “competitive integrated employment," despite potential pushback from the federal level, hers is a story of success, a human face on a complicated issue.

Oh yeah, she’s also celebrating 12 years on the job this month, and could barely contain her excitement about it when she spoke last week with PhillyVoice before heading out the door to work.

“I’m looking forward to seeing all the students,” she said, alluding to “new student move-in day” on August 22 and the months thereafter. “They’re really nice.”

'I THINK IT'S TIME FOR SUSIE TO MOVE OUT'

Gelb did not find her way into a self-sufficient life without help. The Judith Creed Horizons for Achieving Independence (JCHAI) program helped lay much of the groundwork that makes it possible.

In 1987, four family members of people with disabilities (including the namesake) banded together to form the program, driven by their concern about service gaps that materialize when the developmentally disabled “aged out of school.”

“They were worried about what was going to happen to their kids,” said Stacy Jarrett Levitan, executive director of JCHAI, which uniquely pairs independent living with vocational services.

“I’m happy because I’m going to work. I get great evaluations. People are so friendly. The managers are so nice to me." – Susan Gelb

Over the years, it has grown into a program that helps adults thrive in independent-living situations with a focus on finding jobs where they’re part of, and not pigeonholed away from, co-workers without disabilities.

According to Levitan, the national average for “competitive, integrated employment” for people with disabilities is about 34 percent. At JCHAI, the employment rate is more than double that figure.

Gelb – one of about 150 people in the program scattered across the region – cleans tables and trays, restocks condiments, silverware, and napkins and socializes with students, just like any dining-services employee.

“Susan is an excellent example of how people with disabilities can benefit from competitive, integrated employment,” said Levitan during an interview at Gelb’s apartment. "Not only Susan benefits, her co-workers also enjoy a better work experience due to Susan’s diligence, great attitude and strong attendance.”

To help make that case, Gelb called everyone over to her home computer where she pulled up a YouTube video titled “Villanova Dining Services Does the Running Man Challenge.” (She makes an appearance at the 0:35 mark.)

Gelb grew up in East Oak Lane and Northeast Philadelphia, where she went to Northeast High from her sophomore through senior years.

Still living at home with her mother and stepfather after graduation – her birth father tragically died young of a heart attack – she held down a job from 1989 to 2003 until downsizing left her on the outside looking in.

When she was about to turn 30, a life-altering shift arrived.

“My mom said, ‘I think it’s time for Susie to move out,’” Gelb recalled. “She wanted me in a safe place. She didn’t want me to go away. I was a little bit nervous.”

Over the next several years, her mother found two important things: the JCHAI program and, in 2006, a job listing.

“Susan, I found a great job for you: Villanova University Dining Services,” she said of her mother’s declaration that led to an interview, with job coach at her side. “I wore something nice to it. They said it was good pay. Weeks later, they called me and said I got the job.”

Living at the time at the Presidential City Apartments along City Line Avenue,  the commute was considerably more challenging: the Route 65 bus to 69th Street Station and beyond. The 44 to Ardmore. She remembered it well.

“It was such a long schlep. I was so tired when I got home,” she said. “One day, it took me two hours to get home. When it snowed really bad one time, my mom called and said, ‘No, you’re not going in.'”

Still, she said, she loves “the peace and quiet” that comes with living on her own.

'WE STILL HAVE A LONG WAY TO GO'

In 2015, she moved to her current apartment in Bryn Mawr, which she shares with roommate Jenna, who is also part of the program. (Participants often live in close proximity to one another; more than two dozen live in the same complex.)

“I’m happy because I’m going to work. I get great evaluations,” Gelb said of her 11 a.m. to 3:30 p.m. shift. “People are so friendly. The managers are so nice to me. I get holidays off. There's air conditioning. I get a lot of exercise since I walk to all four floors at Belle Air.

“I sometimes see the students out at Wawa or in Bryn Mawr. They ask ‘Don’t you work at Connelly?' I say 'Yeah!’”

“People are really thrilled. It’s not just working with people with disabilities. It’s people working with us, people who can contribute.” – Stacy Jarrett Levitan, executive director of the Judith Creed Horizons for Achieving Independence program

Levitan said there are other benefits to having people with developmental disabilities immersed with all co-workers instead of being “pigeonholed.”

She knows this as the head of the program who's seen Walgreens examine the merits of disability inclusion, and a sister whose brother with Down syndrome is about to celebrate his 30th year on the job at an area library, a position he's held since graduating from Lower Merion High School in 1988.

“People are really thrilled. It’s not just working with people with disabilities. It’s people working with us, people who can contribute,” she said. "We all have things we’re not good at. Susan’s really awesome at cleaning, really awesome at what she does. She’s upbeat. She loves coming to work. That rubs off. People do better at a job that matches their interests.”

More than that, she said, “we’ve learned a lot about how much they can achieve. It’s better for all of us if we have a working population that resembles the actual population,” citing data that found nearly one in five Americans have a disability.

She said Pennsylvania Gov. Tom Wolf’s “Employment First” push is a step in the right direction “but we still have a long way to go to ensure people with disabilities have access to all jobs.” Should this push fail to continue, consequences could be dire, predicted Levitan.

“Government is less and less able to help people with disabilities survive,” she said. “They are not going to be able to survive if they don’t have an income.”

For her part, and after a group trip to Washington, D.C., Gelb will start another year working at a place she loves, where she is surrounded by co-workers and students with whom she feels a lasting connection.

She's clearly excited, both about work and life itself.

Before heading to work last week, she started ticking off a list of movies premiering soon on HBO.

“’Ferdinand.’ ‘Murder on the Orient Express.’ ‘The Great Showman.’ ‘Pitch Perfect 3,’” she said. “I can call friends up and ask ‘If you’re not busy, would you like to go to a movie, or come over and watch a movie?’ It’s great.”