The FDA wants manufacturers and restaurants to cut the sodium levels in their food, but people can take action, too 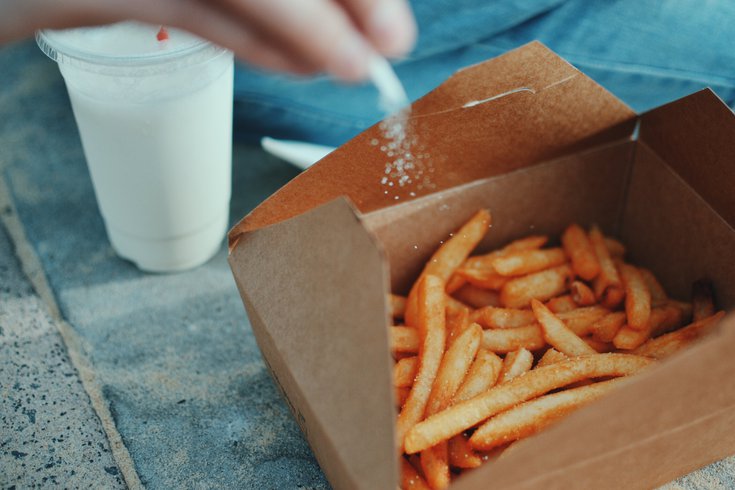 Adding table salt to foods already rich in sodium is an unhealthy habit.

Most people know eating too much salt is bad for their health, but it can be a challenge to cut back on.

From using it to flavor personal cooking to the high levels included in processed foods, there are lots of salt sources that are easy to miss.

U.S. dietary guidelines recommend people consume no more than 2,300 milligrams of salt per day, with the ideal limit being closer to 1,500 mg per day. But most Americans consume about 3,400 mg per day, significantly higher than the recommended amounts.

Even reducing daily salt intake by just 1,000 mg can make a positive difference. To that end, the U.S. Food and Drug Administration is asking food manufacturers and restaurants to reduce the amount of salt in their products over the next two and a half years.

The FDA's goal is to reduce the average American's sodium intake by 12% to 3,000 mg a day. For most Americans, more than 70% of their sodium intake comes from salt added during food manufacturing and commercial food preparation, according to the FDA.

The guidance includes sodium target levels for more than 160 categories of processed, packaged and prepared food, including tomato sauce and breakfast cereals. However, the recommendations are voluntary and mark a finalized version of 2016 interim guidance that was largely ignored, according to NBC News.

Though the new goal is still higher than the current recommendation, many public health experts say it is a good first step and will encourage the food industry to make needed changes.

Changing individual diets also is an important component to reducing the overall salt intake of Americans.

Here are some steps people can take to cut their sodium intake and improve their health, per the American Heart Association and the U.S. Centers for Disease Control and Prevention:

•Read food labels carefully when shopping to purposefully choose products low in sodium.
•Choose natural foods over processed products.
•Limit consumption of natural foods with high sodium levels, such as cheese, seafood and olives.
•Check the ingredients of the over-counter and prescription medications for their salt content.
•When preparing food at home, use less table salt for seasoning.
•When dining out, look for low-sodium foods on the menu and use pepper instead of salt for extra flavor.
•Follow the Dietary Approaches to Stop Hypertension diet.

For people whose tastebuds always seem to crave salt, switching to other seasoning alternatives can help the weaning process, nutritionists say. Fresh lemon juice can be used to season fish and vegetables. There are plenty of spices and herbs that can boost flavoring, including Allspice, basil, bay leaves, caraway seeds, garlic, onion powder, chives, sage, thyme and paprika.

Reducing salt is critical for improving blood pressure and reducing the risk of heart attack or stroke. Too much salt also can affect kidney function.

Studies have shown that a high-salt diet is associated with an increased risk for stomach cancer and osteoporosis – the more salt people consume the more calcium they lose through urination.