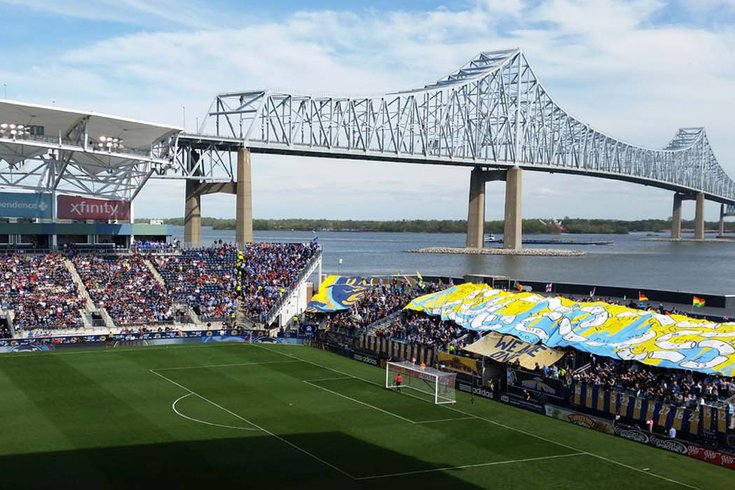 Tim McDermott is focused on the fans.

Just a few months into his new job, the Philadelphia Union's Chief Business Officer is prioritizing supporter interaction in attempts to improve the 2016 gameday experience. "Union 2.0" is a fair way to frame the post-Nick Sakiewicz era, with McDermott and Earnie Stewart taking over the front office and technical staff operations, respectively.

In part 1 of our sit-down discussion, McDermott spoke about the newly formed "fan council" and shared some ideas for improving the "driveway to driveway" fan experience.

In part 2, we continue with the topic of development around the stadium, specifically the independent parking lots that sit adjacent to Union-owned property.

PhillyVoice: Is it safe to say that the focus is more on what Keystone Sports and Entertainment can control, versus dealing with independent land owners and maybe those long term or peripheral kind of issues? Does it make sense to focus on the stadium, the team, and more "immediate" items before moving in other directions?

Tim McDermott: I would tell you that we certainly have our eye towards those other pieces. If the opportunity presented itself for us to have more control of those other areas and those other parking lots, we would certainly do it. We would love to do it. I think controlling these other areas would provide us more of an opportunity to develop the region better. That is one thing that we would love to do. It's hard for us to develop this region and this footprint if we don't have that ownership or control.

Tim McDermott: Yeah. I certainly have an eye on that and I would love to get there. I think staying focused is kind of where I'm at, making sure that my focus right now is on growing the fan base, selling more season tickets, and improving the overarching brand experience. I mentioned earlier that we built these sort of ten core strategies to accelerate growth. That's what I'm trying to keep my eye on, is those ten core strategies. One of those is staffing, and bringing in a world class executive staff. We're going to be making some announcements; we brought in these amazing folks and elevated some folks internally who deserved it.

Joe Banner once said to me, when he was president of the Eagles – he said this to the entire staff at the time and it's something that I always took to heart – he said, in the sports world, we put 11 guys on the field and they put 11 guys on the field. We've got six coaches and they've got six coaches. We've got a scouting department and they've got a scouting department. We've got a training complex and they've got a training complex. We don't have a secret sauce like Kentucky Fried Chicken. We're not a pharmaceutical company that's got intellectual property around some new drug coming out. What we have is the people we hire, their minds, their intellect, and their hard work. Therefore, hiring the best staff is critical to success, and creating a culture for their own personal success. If you talk to myself or Earnie Stewart, a lot of what we talk about is that professional and personal development. That's whether you're a player, and you're getting personalized development programs, or whether you're a staff member. We want people to know that when they come to work here, they get better professionally. And if that creates a new opportunity for them outside of the organization, that's okay. We want that to be the case. We want people to say, 'this is a great place to come and work and develop and grow.' Hopefully, we retain as many of those people as possible. But at the end of the day, if they find outside opportunities because of what they got here, that's good for us too. We're really focused on creating a great culture and hiring fantastic people.

The other tenets we're talking about, one of them is a ticketing engine. What does it look like to have a really strong and thriving ticketing engine? We brought in a new VP of ticket sales who came from the NBA as well as MLS. He's got a good combination of (experience). I think the NBA does a fantastic job of training folks in selling tickets. We're basically going to be doubling our ticketing staff over the next eight months. We'll have one of the larger ticketing staffs in MLS. Building that ticketing engine is another core piece. We've looked at growing our digital properties, we've looked at improving our brand, we've looked at brand strategy. We've looked at CRM (customer relationship management) and database. These are part of that list of core strategies to grow the company.

@big_lummie thx for the feedback. Agree. We need to do better. We will circle internally and address it. We can and will do better.

PhillyVoice: Earnie Stewart came out a few weeks ago and talked about his displeasure with the field conditions after the NCAA lacrosse tournament. He's a guy who takes a hard line professionally and looks for every advantage he can find. We asked him if there was a middle ground on the issue and he basically turned to us and said that there is no middle ground. But, at the end of the day, this is a taxpayer funded stadium and there's probably some sort of responsibility to hold these other events in Chester and help generate revenue at the same time. Inevitably, there has to be some middle ground, right?

McDermott: What I would say on that is, Earnie and I are very much in line (with) what we do and how we do it. I think what Earnie is saying, and what I would say is, that it's time for soccer to sit at the adult table and get away from the kid table. For us to do that, there are certain ways that we need to act, look, and behave. When we have a facility that has lines all over it from another sport, then that's not placing soccer at the top of the totem pole. I think, at the end of the day, we want to ensure that we always have the best field that provides us a competitive advantage. Beyond, quite frankly, the Philadelphia Union, there's this responsibility, that if we truly believe in soccer as being one of the big sports in this country, then let's show it and let's act that way. That means that we have to maybe eliminate some of the things that we traditionally have done because it doesn't look great if you've got markings and lines all over the field. If they played the Super Bowl and there were lacrosse lines all over the field, that doesn't speak well of the NFL.

There definitely is a balancing act. There are certain things that we have found that still preserve the field and the quality of the field. We'll look to do those sorts of concerts or sporting events that truly do preserve the look. I think what we can also figure out is when we do them, so we can have them maybe during an away trip or a series of away games so that there is time to recover without jeopardizing the field. First and foremost, we have to ensure that the quality of the field is paramount and at the top. That signals something to the players, to the coaching staff, and to the fans, quite frankly, that we're taking it seriously and that we demand excellence from (everyone) in thinking of it in those terms. Earnie and I have a similar, shared view in terms of what we're trying to accomplish. We want to win championships. To do that, we have to create a culture that says that soccer is the most important thing. Everything else has to come second to that.

There will be a balancing act that we'll have to play a little bit. There will have to be a transition from where we've been, to where we'll end up. But I think his passion for it is right and it's good. I think it's similar to the way in which I become passionate about wanting to get the brand of the Philadelphia Union in as many places as possible. When I see an article that gets written that mentions four sports, but not the Union, I'm going to stick up for the Union. I'm going to stick up for our fans and I'm going to talk to a writer or an editor and let them know that it's not acceptable and that the game has changed.