At kickoff, all three of Houston's ex-Union players were sitting on the bench.

Sheanon Williams didn't get into the game, and Andrew Wenger made a short, second-half cameo.

But Cristian Maidana got his chance, and torched his former team with a game-winning goal in the dying moments of stoppage time.

The storyline writes itself, but it didn't seem to be the focal point of Union social media after the 1-0 loss. Fan ire was instead directed at referee Edvin Jurisevic, who sent off Josh Yaro with a second yellow card in the final minutes of the contest. Now short-handed, Philadelphia couldn't do much but put ten players behind the ball and attempt to see out a scoreless draw. Instead, a bad foul was conceded on the edge of the area and “Chaco” buried the resulting free kick.

Let's go through a short question and answer exercise.

Q - Was the no-call on Warren Creavalle's penalty shout a bad decision?

Q – Did the Union generate enough offense to nick a goal at the other end of the field?

A tired Union team played in the Texas heat on short-turnaround with three strikers unable to start through injury.

Philly managed just two shots on goal, while Blake bailed out his team on the other end. Houston, for as many efforts as they put on frame, tried a couple of other shots that wouldn't have hit the broad side of a barn from ten yards away.

In the end, did either team really deserve to win?

What do you do when you're mising three of your strikers?

Generally, you try to get your best 11 players on the field, formation be damned.

Jim Curtin followed that philosophy and came out with a lineup that looked like a false 9, but really didn't play that way on the field.

With Roland Alberg spearheading the shape, it seemed like a dynamic grouping of midfielders could work well in possession and create some attacking moments through advanced wing play. Instead, Alberg stayed higher up the field, almost like a true center forward, and just didn't see much of the ball.

If you go back to the first Philly and Orlando game this season, there's really good game film that shows how the false 9 generally plays out. In that matchup, Kaka was the fake forward, and he sat a bit deeper in the formation. What that did was bring the center backs out a bit, which allowed Orlando's wingers to slash into the channels.

That idea is illustrated below in a screengrab of Orlando's goal, which came from an Adrian Winter movement between Keegan Rosenberry and Ken Tribbett. This play began with a throw-in, but the design is similar. With both center backs stepping to the ball, Winter and Kevin Molino are able to get into good pockets of space. Kaka, the false 9, isn't even really in the play.

Alberg, to his credit, did a good job of keeping the shape and tried to stay high up the field. I thought maybe his second striker tendencies would take over, and bring him a bit deeper in search of the ball.

That never seemed to happen. Alberg just couldn't get much of the ball, even with Tranquillo Barnetta in the number ten role behind him. It seemed to be a positive going into this game, the idea that Barnetta could move up a spot and get back into his preferred playmaking role. He just looked a bit heavy-legged though, and Warren Creavalle saw more of the ball in the center of the field.

Alberg came off the field in the 62nd minute with  just 16 total actions in all facets of the game. He had one blocked shot, one recovery, one unsuccessful dribble, two fouls suffered, one offside call, and went six for ten in attempted passing. 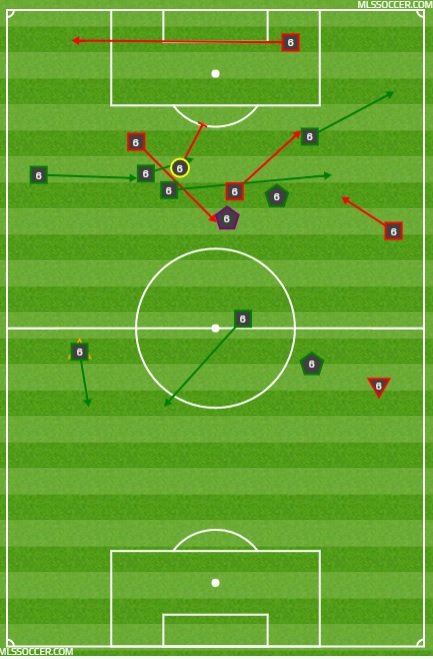 The website Whoscored.com logged 15 touches for Alberg and rated him 6.2 out of 10, which I think seems a bit high.

Positionally, he barely got into the box, which you can see in the heatmap below. Neither striker had a banner day, but you can see a couple of those purple splotches in the Houston box that illustrate the attempts that Bruin made to get inside the penalty area.

He got off a blocked shot and had another solo run that took him into the corner. The resulting ball came across the face of goal, but there was no one there, as he would normally be the one crashing the box from a deeper position.

This was a tough assignment for Alberg, but I thought we might see a bit more from him.

He was the most effective of the Union's front four, at least for the time he was on the field. There just wasn't any end product, and it probably wasn't his fault.

The most telling sequence took place early in the second half, and it was a series of three attacks in rapid succession. On the first one, Ilsinho played a ball into the channel for Barnetta, who simply didn't expect the pass. On the second one, he found Chris Pontius on a nice roller towards the penalty area, but a bad first touch ended the movement. Then, on the third attack, Ilsinho picked out Brian Carroll, who was standing in an offside position.

Ilsinho is the type of guy who wants to come inside, get on the ball, and pick out a final pass. He isn't going to crash the box or slash into space behind a false 9. Ultimately, he's reliant on his teammates to finish a play.

Even with three chances created, I feel like he was a bit off by his standards.

He's been excellent in the air this year, so you know he wants another shot at the header he blazed over the bar just before halftime.

Beyond that, he just didn't seem to influence the attack in a game where Philly needed help from the wingers without a true center forward on the field.

“Quiet and Effective” - the autobiography of Brian Carroll

It felt like Creavalle was riding a rollercoaster out there.

He seemed a tad off with his passing to start the game, which has never been his strength. But he started to get involved in some beefy challenges and collisions as the match progressed, which is the positive side of his game at the number eight spot. He took some hard hits in this match and really put his body on the line for the team.

Of course there was the second-half penalty shout, which could have easily been called. The opposing player seemed to play the man, and not the ball, which has been whistled by referees since the dawn of creation.

His night unfortunately ended on a sour note when he conceded the foul leading to the game-winning free kick.

Here's that no call for those asking. pic.twitter.com/MQuSJkT3On

After two really good games, Fabi looked a little tired to start this one.

He got beat early, then watched as two crosses were fired in from his part of the field, crosses that turned into free headers that Blake had to save.

There was a later turnover that could have become a half-chance, if not for some emergency Union defending.

Toward the end of the game, he used his chest in a goal-line clearance, then put his body on the line as he took a big hit on a corner kick.

In the first half, there were two times where attackers found that pocket of space between Marquez and Yaro. It could have easily been 1-0 if Blake hadn't come up with saves on those free headers.

Marquez had a really nice tackle on Will Bruin to start the second half, then settled in for his typical, no-nonsense game.

The early yellow may have been harsh, but he did miss on the tackle and got the opposing player with a high boot. For the next 82 minutes, he was total class, and took care of everything that came his way.

The second yellow was definitely a dive, but whenever you put your arm up like that, you're giving the referee a chance to make a bad decision.

We all know what happens when MLS referees are given a chance to make bad decisions.

His touch looked a bit off to start the game, then he settled in well enough with his former college teammate Yaro.

The only major defensive issue was a sideline move from DaMarcus Beasley, who skinned two players and set up Mauro Manotas, who inexplicably got his effort completely wrong.

Offensively, Rosenberry couldn't get forward enough to impact the game with his dangerous crossing and long throw ability.

Blake gets an 'A' for keeping his team in the game for 93 minutes.

It's really disappointing to see his night end the way it did. I'm not sure Andre would have got a hand on Maidana's free kick, but goalkeepers are normally upset about getting beat to their non-wall side. Andre did look to be leaning to his left, and Chaco went the other way entirely, ala Brad Guzan and Lionel Messi from a few weeks back.

Immediately impacted the game with a holdup win and a prime chance on goal. The Union really need a healthy Sapong in the starting lineup.

Looked energetic early and played a role in the Creavalle penalty shout with a nifty back heel inside the box. Later, Leo just seemed to fade from the game as the Union were forced to defend.

Tribbett was an emergency sub after Yaro went off with the second yellow.

He was poor, but he didn't cost the Union this game.