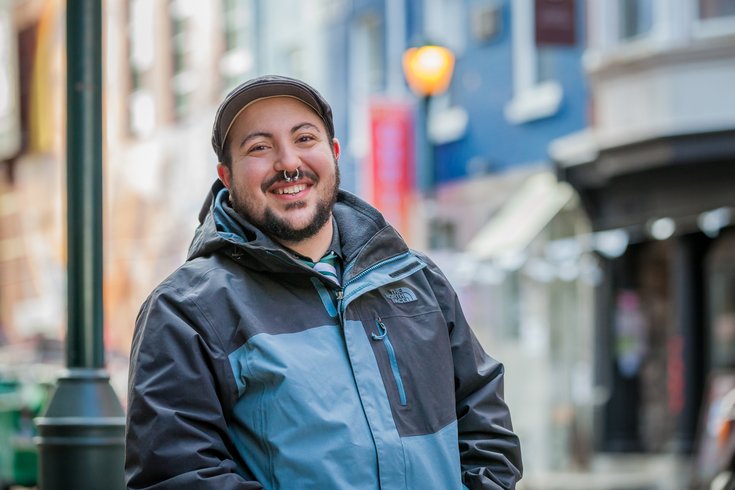 Mika Karnessis counts himself as blessed to have not been alone during the growing pains of his "second puberty."

Karnessis and pal Calvin Woodruff, both 26, met four years ago at TransWay, a drop-in social group for trans men and women at William Way. They quickly realized they had several things in common: They shared friends, a university (Temple), were both fans of film and, most strikingly, had begun transitioning at almost exactly the same time.

Fast-forward to today and, lives more intertwined than ever, they're about to embark on a major journey together: "top surgery," the surgical removal of the chest and a significant step forward for many (but not all) female-to-male trans people in the process of transitioning -- ones who look in the mirror and don't feel quite right.

"Up until now I didn’t feel like I was mentally prepared for it, or physically prepared," Karnessis told PhillyVoice. "Now it’s time. I’m ready; I need this to happen. I’m tired of having to wear a binder every day."

But like many trans people, both he and Woodruff have had difficulty financing their surgeries. Karnessis said he's fortunate to have recently acquired trans-inclusive health insurance that will pay for some of his surgery, but it doesn't account for hidden costs and travel expenses; Woodruff's surgery will need to be paid for out-of-pocket.

Enter: Tabu, which -- in the spirit of Gayborhood unity -- offered its space for a three-hour fundraiser event on Feb. 25.

"Both Cal and Mika have been part of our family here at Tabu for years -- assisting with our shows and behind-the-scenes technical improvements [to] our space," Tabu Events Manager Ian Morrison, who helped plan the fundraiser, told PhillyVoice. "They both have really gone above and beyond."

"Haus of Ham" members Lady Fahrenheit, Lili St. Queer and Eric Jaffe, along with burlesque dancer Timmy Tenderloin, will perform as part of the "Bangarang" event (so-called as a Peter Pan reference -- "We call each other 'The Lost Boys'") and, recognizing they're not the only trans men in town facing hardship, Karnessis and Woodruff will donate 10 percent of all money raised to Philadelphia FIGHT's Youth Health Empowerment Project. They're also accepting donations through crowdfunding.

"The Gayborhood has been so amazing helping us, and people just really coming out and wanting to help us and it’s so – I’ve said it before, but the only word I can think of is 'overwhelming.' And humbling," Karnessis said. "“I’m going to be very excited the first time I get to take my shirt off and go to the beach.”

• Cafe Twelve closed. Owner Alyssa Shilliday posted a farewell Facebook message to patrons on Jan. 30; the shop has been closed since Feb. 1 and will remain so until the business finds new owners (despite a sign on the door that claims it's "closed for renovations"). Shilliday did not respond to requests for comment. So, no word (yet) on the long-term fate of the Gayborhood's most caffeinated mainstay. 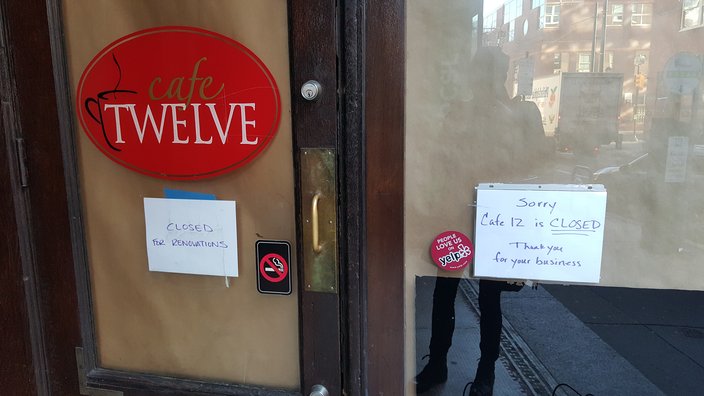 • qFLIX makes a 2016 return. Queer film buffs were devastated when QFest, Philly's LGBT independent film festival since 1995, was indefinitely canceled in 2014. Thankfully, qFLIX Philadelphia stepped in to fill the void with a two-part season in Fall 2014 and Spring 2015 -- albeit with a smaller lineup (50 films compared to QFest's usual 100 or more). The festival will make a return this year, said founding board member Ian Morrison, and is in the process of selecting films and venues. The organization will raise funds with a Tavern On Camac screening of the 1968 drag-pageant docu-film "The Queen." A story that follows Rachel Harlow, who may be Philadelphia's most famous drag queen (and now trans woman), Morrison calls it "required watching" for gay men and drag queens who may not know what it was like to live in an age when cross-dressing was illegal. See the film for $10 at 2 p.m. on Feb. 28 -- Oscar Sunday.

• Gunnar Montana gets a 'Best of' at William Way. A darling of the FringeArts Fringe Festival for the past four seasons, dancer and choreographer (but really, performance artist) Gunnar Montana is partnering with William Way in March to perform pieces from his "Basement," "Hibernate," "Purgatory" and "Resurrection Room" shows. (He's leaving the guts and bathtub props at home, in case you're wondering.) He'll also debut a few new pieces set to appear in his September Fringe Festival show, which he told PhillyVoice has a "whimsical, twisted fairytale feel." Approximately 60 minutes long, audiences will also get a chance to hear commentary on each of the pieces. Part of ticket proceeds will go to William Way.

• Booger drag with Bev. The Gayborhood's self-described "premier Christian drag queen" (expressed with sarcasm, of course) brings the Miss Boxed Wine pageant back for its second outing on Feb. 27 at Tabu. It's a three-round, booger-drag-focused "anti-beauty pageant" complete with a tacky evening gown competition. What is "booger drag," you wonder? "'Booger' is a term in the drag community that typically means an unpolished, ugly or masculine queen," Drew "Bev" Gaver explained to PhillyVoice. "Most drag queens go through the 'Booger' phase when they first start doing drag and don't really know what they're doing. Some stay in that phase longer than others." The point, he added, is to create something so intentionally offensive that it's mood-lightening. "I want people turning to the person next to them and say, 'Can you believe they just did that?!'" Count on a few of those expressions when Gaver rounds out the night with a homage to Steve Harvey. 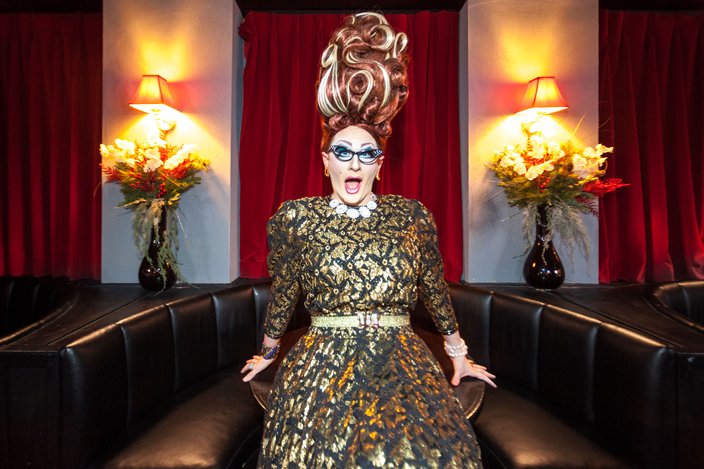 'Bev' before her performance with Brittany Lynn at Duel Piano Bar in February 2015.

• Steve Grand takes Philly. Grand, the openly gay country singer famous for his viral 2013 "All-American Boy" music video (and, let's be honest, his good looks), will make a stop in not one, not two, but three local venues in the coming weeks -- first at The Wonder Bar in Asbury Park, then at the Prince Theater in Philadelphia and again at The Raven in New Hope (yeah, imagine that scene). Tickets for the New Hope performance are sold out, but you can still snag a ticket and hear him croon a ditty or two at The Prince or The Wonder Bar.

• PJ party coming to Joystixx. Last fall, Tabu launched its own arcade-bar in its basement, which has been host to happy hours, a quarterly "Beards and Queers" party and a recurring "Mortal Kombat" tournament series. Next month, Morrison said, the space will play host to a monthly "pajama party" involving a film screening, popcorn and movie-themed performances by drag queen Astala Vista. It's also free -- part of a new effort Tabu is making to charge a cover for fewer events, Morrison said. Bring your PJs and a sleeping bag for the first iteration on March 25.

• Honeygasm goes monthly. Local sexpert Timaree Leigh -- or Sex with Timaree -- has all but become her own Gayborhood brand in the past year, taking up residence in Franky Bradley's with not just her sex-ed comedy hour "DTF," but her recurring "Honeygasm" burlesque show -- now monthly as of March 6. Neither classical burlesque nor "nerdlesque," she told PhillyVoice, Honeygasm is "an indulgent, weird, messy, sexy burlesque show curated to create an exceptional experience in live performance." Features include pole dancers, acrobats and just about any version of sexy on the spectrum. Expect most performances to end with a sexy "sploosh," she added -- one performer recently ended the show by having honey poured all over her.

• Our Night Out at 1925. By now well-established as any Philly LGBT person's place to be and be seen, Our Night Out makes its next stop at 1925 Cocktail Lounge on Feb. 18. Of note, Delaware Valley Legacy Fund, aka the LGBT philanthropy-focused nonprofit behind the mixer that's made everyone feel charitable by sipping a cocktail, recently rebranded to a much less oxygen-exhaustive "DVLF," with a new logo to boot.