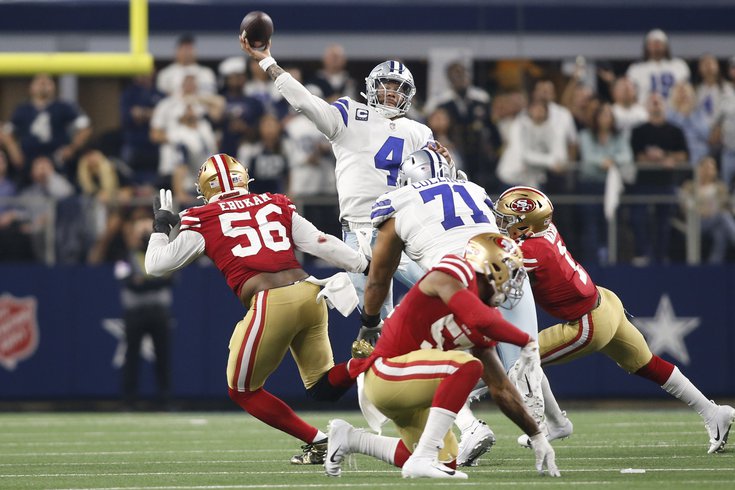 The Cowboys are a more ideal matchup for the Eagles, but they also represent the worst case scenario for many fans.

With their Saturday night blowout win over the New York Giants in the divisional round of the playoffs, the Eagles have made it through to the NFC Championship Game, which they will host in Philadelphia next Sunday.

In the other divisional round game played on Saturday, the Kansas City Chiefs survived against the Jacksonville Jaguars, but Patrick Mahomes suffered an ankle injury and was hobbled throughout the second half of that game.

There are two games left to be played in the divisional round on Sunday evening. Here we'll determine the ideal winner for each.

• Bengals at Bills, 3:00 p.m.: The three teams remaining in the AFC all have elite, star quarterbacks in Mahomes, Josh Allen , and Joe Burrow. Of the three, Allen is the most prone to careless mistakes, not just as a passer, but also because he has fumbled 16 times this season. Like Allen, Mahomes and Burrow can both make difficult throws down the field, but unlike Allen, they are content to take what opposing defenses give them underneath instead of forcing something that is not there.

When Jonathan Gannon's defense has been at its worst, it's when it gives up high percentage passes underneath all day, and it feels like death by a thousand paper cuts. Mahomes and Burrow can play that style of football, whereas Allen seems to get bored by that approach.

The Bengals certainly have their weaknesses, most notably that their offensive line is very banged up.

However, if they somehow beat the Bills in Buffalo, and then the Chiefs in Kansas City, and then get Williams and Cappa back for the Super Bowl, they would be extraordinarily dangerous. The Bills are probably the more ideal Super Bowl opponent remaining, between them and the Bengals. To be determined how the Chiefs fit in, pending more information on the severity of Mahomes' injury.

• Cowboys at 49ers, 6:30 p.m.: The 49ers have the better overall roster than the Cowboys, but they are starting a seventh-round rookie quarterback in Brock Purdy. While Purdy has made his share of plays, he has also often gotten lucky that some wildly off-target throws have fallen harmlessly to the turf instead of into the arms of opposing defenders. It feels like a matter of time before that luck runs out.

Purdy aside, the Niners could present some matchup advantages over the Eagles. On offense, they boast a set of skill position players that excel at gobbling up chunks of yardage after the catch. George Kittle, Deebo Samuel, Brandon Aiyuk, and Christian McCaffrey are all YAC studs. There have been times this season that the Eagles have had shaky tackling, which would be particularly concerning against the Niners. Defensively, the Niners have outstanding, athletic linebackers in Fred Warner and Dre Greenlaw who could make running the ball difficult. The Niners are the worse matchup of the two teams.

And yet, from a "worst case scenario" perspective, I can certainly understand why some Eagles fans would prefer to play the Niners instead of the Cowboys. A loss to the 49ers in the NFC Championship Game would no doubt hurt, but it would not be anywhere near the same level as a loss to the hated Cowboys. So I guess there's no definitive answer here.

Feel free to discuss the games in the comment section below.