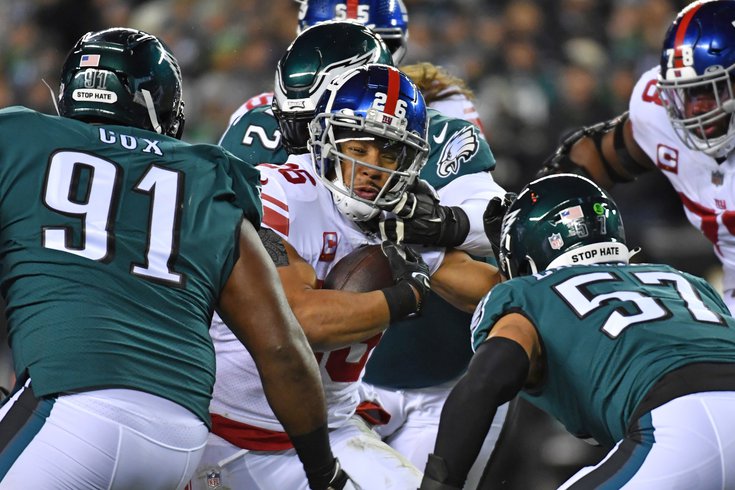 The Eagles' big boys in the trenches had an easy workload against the Giants.

In their divisional round playoff win over the New York Giants, the Philadelphia Eagles played 70 snaps on offense, and 52 on defense. Let's just get right to the snap counts, and some notes.

Analysis: When asked how his shoulder felt throughout the game during his postgame interview, Hurts repeated the same mantra he offered when the same questions came after the Eagles beat the Giants Week 18 — "Good enough."

If you had no idea that Hurts had an injury while watching this game, there was very little that might have tipped you off that he was hurting. He made good throws, he ran through contact, and he got down when appropriate. And now he'll have yet another week to heal up.

Analysis: The trio of Sanders, Scott, and Gainwell combined for 35 carries for 234 yards (6.7 yards per carry) and 2 TDs. All of them played fewer than 30 snaps and should have fresh legs next weekend.

Analysis: Brown was shaken up during this game, so it will be interesting to see what exactly he hurt and how severe it is, but the early indications are that he'll be good to go next weekend. He did seem to mouth the words, "I'm good" on the bench.

The Eagles won't practice until Wednesday. We'll get a better idea then, if not sooner.

Analysis: Goedert only got five targets, but he made a big impact when the ball came his way, making five catches for 58 yards and a TD.

Analysis: The big takeaway here is that the battle-worn Johnson was able to play every snap, until the Eagles rested their starters on their final drive.

Analysis: The Giants' first six offensive possessions went like so:

That would be a total of 22 plays run, and by that point the Eagles were already ahead 28-0 and could begin heavily rotating their defensive linemen to keep everyone fresh. Only three defensive linemen played more than 20 snaps! And for some of the older guys, this wasn't much different than a bye week. Graham only had to play 12 snaps. Joseph only played 10. Compare that with the Giants, who had two defensive linemen — Leonard Williams (67) and Dexter Lawrence (62) — who both played more than 60 snaps.

The light work given to the D-line should be a nice advantage against whoever the Eagles play next weekend, and they even get an extra day of rest.

Analysis: The Giants got their run game going a little bit in the second half after the game was pretty much out of reach, but in the first half Saquon Barkley had 4 rushes for 7 yards, while Daniel Jones had 3 rushes for 13 yards. It also looked like Edwards and White did a good job of corralling Barkley in the passing game, as he only had 2 receptions for 21 yards. Giants tight ends had 2 catches on 4 targets for 20 yards.

Analysis: The defensive backs' corner of the locker room was feisty postgame, with Gardner-Johnson and Slay both proclaiming the Eagles' secondary the best in the NFL. There's a good argument for that, and they may have reinforcements coming, with Avonte Maddox feeling better.

Jobe and Wallace had a couple of big hits in garbage time that the vets really seemed to enjoy.