Doc Rivers doubles down on starting DeAndre Jordan, says players advocated for it 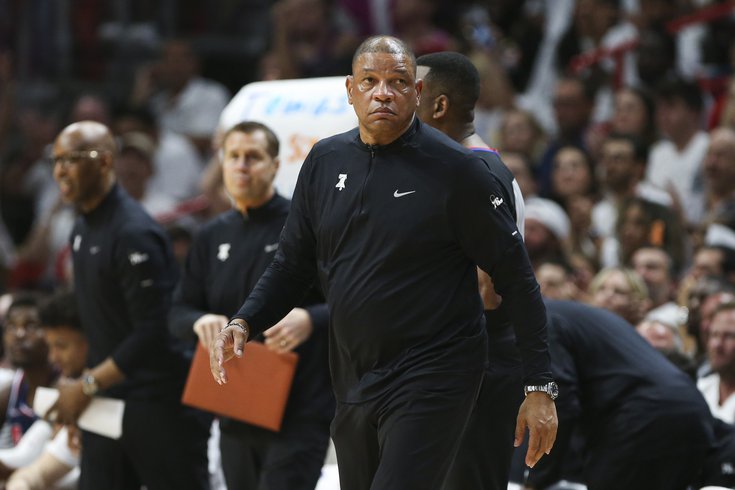 Philadelphia 76ers head coach Doc Rivers watches from the sideline in the fourth quarter against the Miami Heat during game one of the second round for the 2022 NBA playoffs at FTX Arena.

MIAMI — The reaction to DeAndre Jordan starting Game 1 of the second round was, predictably, loud and angry in most corners of Sixers internet. Jordan has no shortage of fans in the locker room for who he is as a person, but his play on the floor has spoken loudly to anyone who watches the team. Seeing him get the first crack at replacing Joel Embiid in a playoff series did not go over well with the public to say the least.

But Doc Rivers, who has said repeatedly that the media overvalues who is on the floor to start the game, doubled down on the idea of starting Jordan after another tough night at the office, and he took it a step further, offering that his guys are a big reason they'll continue to go with the veteran.

“We just felt like, we talked to our guys," Rivers said. "They wanted a big guy, a big roller, I thought the second half that’s how he has to play every night. Those first four or five minutes were great from him, that’s what we need. We also love Paul [Reed], but we don’t need Paul in foul trouble, and that’s why you don’t want to start him."

"We like DJ, we’re going to keep starting him whether you like it or not. That’s what we’re going to do because our guys believe in him. It’s funny, at halftime, we asked all our key guys, we were thinking about it, because I thought Paul Millsap gave us decent minutes, and to a man that’s where they wanted to go.”

That goes further than Rivers simply saying that Jordan is who he prefers and who he will play, suggesting the entire team is on board with a player who, by every measure, has fallen short of doing the job. Set aside what has or hasn't happened in the rest of the games they've played together as a group this year — Reed was comfortably the best option they had in the first half, and we're supposed to believe that everyone came together at halftime and either didn't recognize that or didn't care about it.

Line up the measurables and it's not that close. In four minutes and 22 seconds of action in the first half, Jordan was credited with two points, two turnovers, one foul, and a -12 in the ledger, a fair reflection of what he had to offer. Bill Russell he was not. As was the case during a lot of stinkbombs down the stretch, there were a handful of moments where Jordan grew roots as the play developed around him, turning his head to see Bam Adebayo rising to the rim behind him.

The case for Jordan rests on the idea that, "you know what you're getting," and you do, it's a lot of plays like these. Asking him to make positive decisions in space is a recipe for disaster.

Reed, whether by comparison or in a vacuum, is chaos personified. This is the guy who got himself a Shaqtin A Fool spot for flubbing a reverse windmill during a game, and who picked up three fouls in the first half (and five in 13:03) as a result of his self-proclaimed pride.

"I'm an aggressive player, so you know, I go out there and give 125 percent. Sometimes it just don't work out for me," Reed said. "One thing I got to learn is to sometimes let that shot, let them score. But it's hard, it's like pride. I don't want to be letting nobody score, so that's one thing I got to do better next game, and that's something I will do better for sure."

It's a problem that has to be worked around to be sure. But even with few opportunities to play this season and inexperience catching up to him in these playoffs, Reed makes plays in extended minutes that make you turn your head. Take this catch and finish in traffic from the first half, where Reed does the basketball equivalent of "Mossing" somebody before collecting himself and depositing two points in the basket:

He is certainly not the lob threat Jordan was at his peak, and frankly, he's not really the lob threat Jordan is now in his diminished state. But he is at least showing signs of improvement and proving to guys like James Harden that he can be counted on in these spots. And the other end is where the two main competitors are worlds apart, where Reed has shown value now and in the past, fouls and all. One guy shows the requisite energy and effort to compete, and the other is, well, we don't need to go on a defensive clip parade.

To be fair to Rivers, there are no perfect solutions here. Reed vs. Bam Adebayo is not a matchup that tilts toward the Sixers, and the second half showcased some of the pain of trusting him in that spot. FTX Arena finally came to life during a third-quarter sequence where the Heat buried Philly on the offensive glass, and though Reed was not the sole (or even primary) reason for the issue, Adebayo also went right through him to cap off the possession.

"We wanted more speed on the floor, so we can do more switching. When we go zone and switch, we like Paul Reed out on the floor more. That's what we did there, unfortunately, they crushed us on the glass at that point," Rivers said. "They took 13 more shots than us tonight, and that was big."

That was big. Also big — the Sixers being negative 66.7 points per 100 possessions with DeAndre Jordan on the floor so far in the playoffs. Small sample size theater, it should go without saying, but to quote the great Jack Nicholson:

They're bad at everything with Jordan on the floor, and they've managed to be okay at most things with Reed out there whether he's a driving force or just a useful bus rider. The coach has made his first big decision in replacing Embiid, and I suppose this is the good news — it almost literally cannot get worse from here.