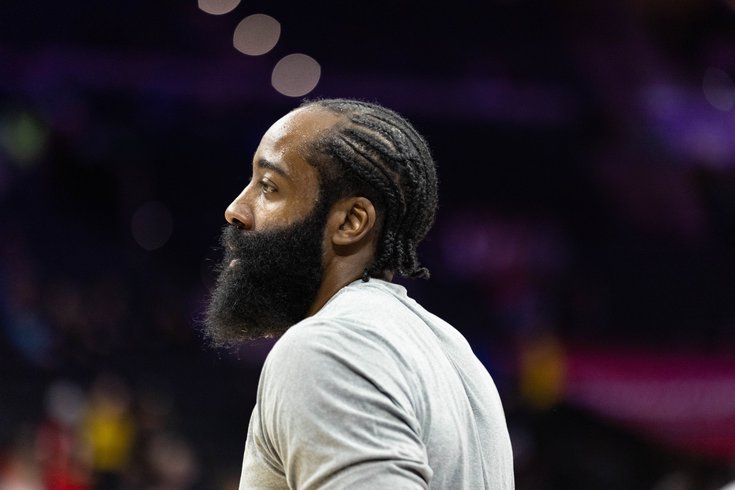 James Harden warms up before the start of the Sixers' game against the Raptors at the Wells Fargo Center on March 20.

Fair or not, James Harden's current legacy as a player is something like this — he is among the most skilled offensive players to ever live, and he has failed to translate that into postseason results. He has had big moments, including a series-ending haymaker against the Spurs to push the Thunder to the NBA Finals at just 22 years old, but those high points have been few and far between. The numbers are probably better than you think, but they don't stick in the mind the way the failures do.

That looked poised to change last year, when Harden opened the playoffs with an absolute ass-kicking of the Boston Celtics, dropping 28-7-11 in a five-game Brooklyn shellacking that reminded everyone of the MVP-caliber season he'd had before suffering an injury. And just when everyone was in the process of saying, "Oh yeah, that's who this guy is," Harden's hammy derailed him in what would ultimately be a seven-game loss to the champs, the bearded star barely moving at times while gutting out four appearances.

At practice on Saturday, Harden made an astute point about the bar he's asked to clear. When he scored a ton and fell short, he heard it from critics. When he has been a playmaker first, second, and third and earned wins with that style, he hears questions. To take that a step further, any kudos he got for gutting it out in the playoffs last season has faded away by now, no one caring all that much when measured against what he hasn't achieved on the team front. The Sixers have been effectively labeled the last-chance saloon for No. 1. Win here, or don't expect anybody else to roll out the red carpet for you.

At a minimum, he has the chance to be whoever he wants to be in the first two games of this series. There's no Embiid to pull rank and demand the ball at this point. Harden stands alone at the top of the depth chart and the salary scale, and as the offensive initiator, he can control the game as he pleases.

"We're going to play more of a James dominant offense than we have because we have to," Doc Rivers said Saturday.

In Philadelphia, it's hard to say what that even looks like. A lot of the lineup numbers from the regular season are hard to translate to the playoffs as a result of the shortened rotation — the team falling off a cliff with Embiid off and Harden on (or vice versa) doesn't tell us much because of how many bench players usually joined Harden for those minutes. The Sixers have frequently kept three-to-four starters on the floor together for much of the postseason, and while losing Embiid will hurt that goal, it goes without saying that their best players will dominate in time played.

Philadelphia's proof of concept for a successful Embiid-less offense centers around the other guy in the backcourt, Tyrese Maxey. On nights without the big guy, the Sixers have spread it out around the Kentucky product, allowing him to attack guys in space with as many shooters around him as they can get. Some of his best performances of the year, including a game-winning performance against these Miami Heat, have come in those moments.

Part of Harden's job, at least as he explains it, is making sure that Maxey is staying in the right frame of mind throughout the game, so that he can have moments like those.

"He's talented and he just wants to go out there and do the right thing all the time, so I feel like it's my job to help him," Harden said. "Especially, you can tell with his facial expressions when he looks a little confused or things aren't going great, just tell him it's a long game, you've got to stay with it, you've got to stay in attack mode. Even if you feel like they're trapping you or you feel like you can't get to the paint, press the issue a little bit more and things will open up."

The strategy from those Embiid-less games should be easy enough to incorporate Harden into. Putting Harden in that spot is as straightforward as it gets for playoff basketball — give the ball to your best ballhandler, send screens for him, and let him cook. And he along with other members of the team have doubled down on the importance of defense and details, rather than worry too much about how the offense will look sans Embiid.

"When Jo's not in the game, we've got to space the floor, get to the paint and either finish the basketball or kick out to our shooters. I think for us it's the defensive mindset we have to have. If we can contain them, take away the gifts, as we call them, offensively we'll take care of the rest," Harden said Sunday. "Every series, every playoff game, if you rebound the basketball and don't turn it over, you give yourself a really good chance to win."

Perhaps that confidence has been given a boost thanks to some improvements over the course of that Toronto series. Harden ended up shooting 65.2 percent in the restricted area, a jump of nearly 10 percent over his regular-season numbers. You could attribute that to a number of factors, from small sample size to increased time with Embiid to getting to attack a compromised Fred Van Vleet for a good chunk of the series, but it's a number that needs to keep trending toward the positive, lest the Sixers end up reliant on the success of his stepback jumper alone.

Rarely has there been any public doubt regarding Harden's ability to lead them from the perimeter. Teammates have consistently marveled at Harden's ability to find them when they're open, labeling him things like a "basketball savant" and a "genius" for his ability to manipulate the game. Conceptually, apex Harden is a role player's dream, a guy who can go out and get 15 assists while bombarding the opponent as a scorer, too, taking pressure off of everyone else to create.

The Sixers have suggested Miami will play aggressive, hard-hedging defense to open this series, forcing the ball out of Harden's hands with no fear of the MVP center who would end up in a mismatch or wide open as a result. I'm not so sure that's the case — if Harden has shown anything consistently, it's his ability to dismantle teams who send two at him. He has every pass imaginable in his bag, ranging from no-look, crosscourt passes to the corner to through-the-legs bounces in traffic, each equally effective at creating an opportunity for a teammate.

Regardless of how Miami sets up, this is a golden opportunity for Harden to begin the slow march of changing what people think about him. The Sixers are firm underdogs in this series, even with the news that Embiid might be able to make it back by Game 3 or 4. Harden finding a way to keep the Sixers in the hunt without Embiid would reaffirm why Daryl Morey wanted him to badly in the first place, and show the sort of qualities some have accused him of lacking in these moments: leadership, mental toughness, and the ability to adapt his game to suit the style of the playoffs.

And it doesn't require, contrary to popular belief, for Harden to go out and average 30 points per game on the path to victory. It may end up that that's what they need to get an individual game over the line, but as Embiid showed in the opening round, an elite floor game where he exploits the attention on him is no less valuable. Harden has been through enough wars to identify what the moment requires, and he has capable lieutenants with him to pick up the slack.

But we will see, starting Monday night, what Harden has to offer as the front-of-mind, team-leading star at this precise moment in his career. Not what he once did, not what he might over the course of a monster contract, but all that he has in this critical spot for the Sixers. The pressure might show out on the floor, but so far, it hasn't shown up in what he has to say about this series.

"It's not about just scoring. 'James Harden needs to score 30,' that's not necessarily true. We've got a guy that's averaging 30, the MVP of this league. You've got really good guys like Tyrese and Tobias, and our entire group," Harden said. "I think everybody's counting us out, because Jo's out or whatever the case may be, we focus in-house and how can we do better."

Embiid and Lowry are the two big names who have been definitively ruled out for the opener, and we don't need to go over exactly how important Embiid is to Philadelphia, as that's a topic we covered multiple times over the weekend and basically every day throughout the season. But I will say, I was a little surprised at the pushback I got from both fanbases for this tweet on Sunday:

Nobody needs to remind me of Miami's ability to win with depth — I have name-checked Gabe Vincent multiple times this weekend, and I picked the damn Heat to win the series once Embiid was knocked out of contention for the first two games. That doesn't mean that losing Lowry is just nothing to think about or factor into the equation. You always want to have as many good players as possible, and Lowry is definitively one of Miami's best players, helpful on both ends with far more meaningful playoff experience than the guys who will be filling in for him.

Does that mean the Sixers are going to have an easy time in Game 1 without him? Of course not. Even if only one or two of those guys with questionable labels get scratched before tip-off, the Heat are perfectly suited to give Philly fits and win anyway. I never realized it would be controversial, though, to say it's good for the Sixers that a good player for Miami is not available for a game. I clearly need to spend less time online before I lose my mind like the rest of you.