How to help people in Ukraine: Make a donation to a relief organization

Multiple charities are sending basic necessities – water, medical supplies, food and other emergency items – those impacted by the Russian invasion 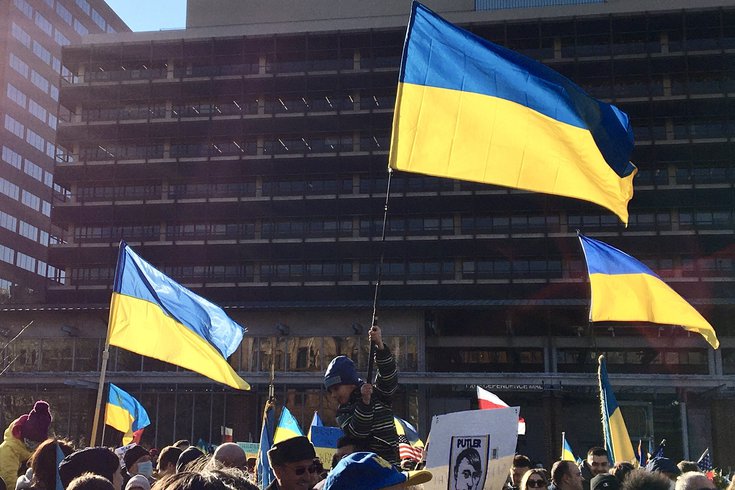 Below are ways to can help Ukraine and its citizens displaced by the ongoing Russian invasion of their country. Sunflower of Peace, United Help Ukraine, Razom for Ukraine, Voices of Children, Project HOPE are among the charities that have established campaigns to provide aid. The photo was taken during a pro-Ukraine rally in Philadelphia on Sunday, Feb. 27, 2022.

Conditions in Ukraine continue to worsen amid the Russia invasion. Though initial peace talks took place in Belarus on Monday, military attacks are reportedly ongoing in several Ukrainian cities.

An estimated 500,000 Ukrainians have fled to Poland and other neighboring countries in Europe, some of which have lifted visa and passport requirements to facilitate the border crossings for these new refugees.

People in the United States, including in Philadelphia, which has the second-largest Ukrainian community in the country, can help by donating to organizations offering relief to Ukrainians affected by the war.

In addition to contributing money relief efforts, Americans can help by staying informed about Russia's aggression, but be cautious about the sources you get news, experts told Time. Misinformation can quickly go viral on social media, and Russia is known to intentionally spread inaccurate and misleading reports using various online platforms.

For instance, on TikTok there has been a surge of videos that actually depict old conflicts but claim to be showing the current invasion. This has led to increased concerns about how easy it is for misinformation to spread and influence public perspectives.

Here are some of the organizations working to help Ukraine and its people as the invasion continues to unfold.

Project HOPE was established in 1958 as an international organization that helps train and support health care workers in high-risk areas. Currently, the group is working to ship medical supplies and medicine to the people impacted by the invasion, which the United Nations estimates could lead to a large-scale humanitarian crisis, with up to 4 million refugees. The organization also has launched a crisis response team to mitigate the continued risk of crisis in the region.

The United Nations International Children's Emergency Fund has provided assistance to children and families caught in the crossfires of war and other humanitarian crises for decades. UNICEF is raising money to provide emergency water, education and health supplies to the 7.5 million children currently impacted by the disaster.

The charitable foundation has provided psychological, trauma-based support, including art therapy, to children impacted by military conflict in eastern Ukraine for the last eight years. Given the conditions prompted by the invasion, Voices of Children is expanding its services throughout the country. In an Instagram post, the organization said it is opening a new line of assistance for children and adults who have been impacted.

Donations can be made on Voices of Children's website.

Sunflower of Peace was established in 2015 to provide medical and humanitarian aid to people experiencing violence in Ukraine. Currently, the group is accepting Facebook donations to prepare first aid tactical backpacks to paramedics and other health care workers in Ukraine. According to the American nonprofit, each backpack has the potential to save up to 10 lives impacted by military conflict.

Cooperative for American Remittances to Europe

CARE was established in 1945 as part of the World War II recovery effort and provides emergency assistance to vulnerable communities across the world. CARE seeks to provide emergency aid to 4 million Ukrainians amid the ongoing war. The group is preparing food, water and hygiene kits to civilians on the ground in Ukraine and those who have fled.

Born out of the Russian annexation of Crimea and the conflict that followed, Razom for Ukraine is an organization that promotes democracy and peace in the country. While the nonprofit is running its own fundraiser to support relief efforts in Ukraine, it also has a host of resources on its social media accounts, including direct links to support the Ukrainian army.

Donations can be made on Razom for Ukraine's website or via PayPal.

UUARC was established in 1944 to provide aid to refugees who came to the United States following World War II. It is providing direct emergency relief to those on the ground in Ukraine and assistance to refugees in other countries that have fled Ukraine due to increased violence. UUARC is providing medical supplies, shelter and food to those impacted.

Donations can be made via GoFundMe.

United Help Ukraine is an American-based charity providing emergency relief to war-impacted Ukrainians across the world. Donations go to Ukrainian refugees, people in Ukraine impacted by the war, and families of the killed or wounded. The group also provides support to displaced residents of Crimea impacted by the ongoing war in Eastern Ukraine.

Donations can be made via PayPal.

International Committee of the Red Cross

The ICRC is working to repair destroyed medical infrastructure throughout the region and ensure that residents and others impacted by the war have necessary resources. It is also helping to supply hospitals and medical centers with clean drinking water.

"This new phase of the fighting in Ukraine has sent an ominous chill down my spine," wrote Peter Maurer, president of the ICRC. "The intensification and spread of death and destruction that are frightening to contemplate, given the immense military capacities involved."

Maurer noted that during all forms of war and military conflict, civilians and innocent people are the most directly impacted.