On Sunday's episode of 'Last Week Tonight,' the show looked at the battle awaiting Josh Shapiro against the far-right Republican in November 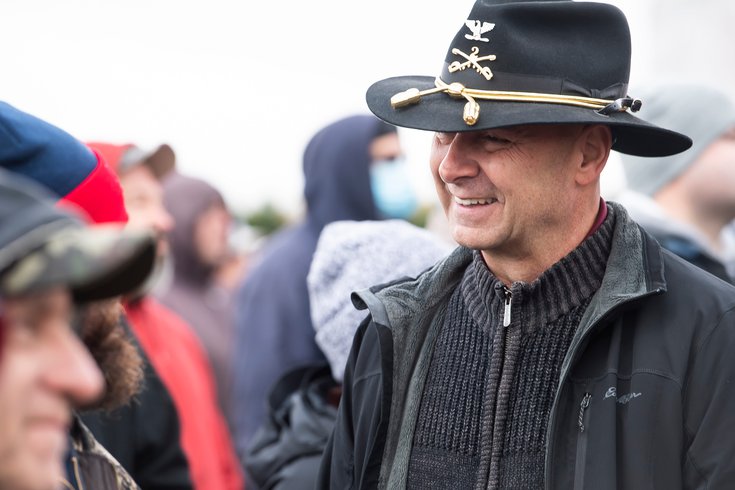 In Pennsylvania's race for governor in 2022, far-right Republican state Sen. Doug Mastriano won his party's nomination in last week's primary. John Oliver discussed the election on HBO's 'Last Week Tonight,' sharing concern that Josh Shapiro and the Democrats may have tempted fate in welcoming a battle with Mastriano.

State Sen. Doug Mastriano cruised to victory in last Tuesday's Republican primary for Pennsylvania governor, taking nearly 44% of the vote on the strength of a late endorsement from former President Donald Trump.

The race in Pennsylvania is now set up exactly as predicted by Democratic nominee and state Attorney General Josh Shapiro, who was unopposed in his party's primary. Shapiro's campaign had run an ad ahead of the election that boosted Mastriano as his anticipated opponent in November, leaning into a tactic that bets on Mastriano proving he's unelectable among swing voters.

"If Doug Mastriano wins, it's a win for what Donald Trump stands for," the campaign ad says. "Is that what we want in Pennsylvania?"

During Sunday night's episode of "Last Week Tonight," John Oliver examined Mastriano's far-right track record – which includes supporting Trump's baseless claims of fraud in the 2020 election and banning abortion with no exceptions for rape, incest and the health of the mother – and the host still came to the conclusion that the ad's rhetorical question is no layup for Democrats.

Mastriano also has made no secret that he marched on the Capitol on Jan. 6 – though he notes he did not break the law – and he's even boasted that, if elected governor, he will use his power in Harrisburg to interfere in elections under the guise of ensuring their integrity.

"Mastriano has flirted with the extreme fringes of his party," Oliver said, pointing to Mastriano's recent appearance at an event sponsored by QAnon supporters.

Shapiro and the Democrats seem confident Mastriano will prove to be too reactionary to win in November, but Oliver and others fear that aiding the state senator's primary victory was a dangerous gamble.

"That is f***ing risky," Oliver said. "Because look, I get the tactic behind wanting to choose an opponent that you think you have a better chance of beating, but as has been made painfully clear over the last decade, the most extreme Republican isn't necessarily the least electable. So, I really hope Democrats know what they're doing with Mastriano, but they will be making a huge mistake in underestimating him."

Shapiro made an appearance Sunday on CNN to discuss the governor's race, explaining to Dana Bash that the strategy his campaign chose was based on polling that showed a strong likelihood Mastriano would earn the nomination.

"What we did was start the general election campaign and demonstrate the clear contrast, the stark differences between he and I," Shapiro said. "(Mastriano) is extreme and he his dangerous."

"He is extreme and he is dangerous."

Pennsylvania Democratic gubernatorial candidate @JoshShapiroPA explains to @DanaBashCNN why he decided to run a campaign ad that seemed to be designed to boost his opponent @SenMastriano. @CNNSotu #CNNSOTU pic.twitter.com/W3H3iwxtQj

The race between Shapiro and Mastriano figures to be one of the most expensive in the country this cycle, with millions of dollars to be spent on ads that center around the candidates and the issues.

Democrats and several allied groups on Monday launched a $6 million digital, television and voter mobilization campaign targeting Mastriano specifically on abortion rights. Shapiro has amassed a considerable war chest with more than $16 million he's been able to preserve by running unopposed in the primary, but Mastriano's strong grassroots network is fueled by religion, Facebook and the undying 2020 election conspiracy.

Shapiro may be right that his ad had little to do with Mastriano's primary victory, but he and Democrats who liken the state senator to Trump are playing with fire. It's a lesson Hillary Clinton learned by boosting Trump as her opponent in 2016, and her loss in Pennsylvania opened the gates to an extreme brand of Republican politics that has resonated more than Democrats imagined in their worst nightmares.