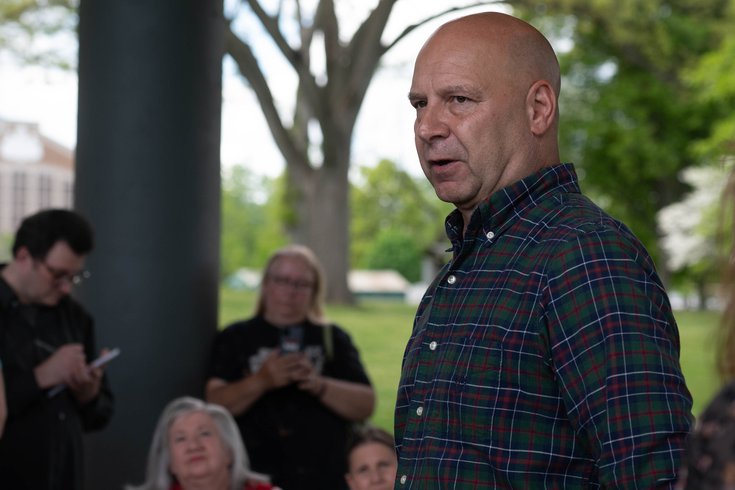 Doug Mastriano won the Republican nomination for Pennsylvania governor in Tuesday's primary. Mastriano is a military veteran and a state senator. He is endorsed by former president Donald Trump and his political ideology is far right.

Doug Mastriano won the Republican nomination for governor in Pennsylvania on Tuesday. With nearly 95% of the votes counted, the state senator, who was endorsed by Donald Trump and, himself, has endorsed far-right conspiracy theories, including unsubstantiated claims of fraud in the 2020 presidential election, had a large lead over a crowded field of candidates.

The Associated Press predicted Mastriano would win the race just before 10 p.m. All results are unofficial until certified by the state. He will face Pennsylvania Attorney General Josh Shapiro, who ran uncontested in the Democratic primary.

With 95% of votes counted, Mastriano has received 44.4% of votes compared to the second leading candidate, Lou Barletta, who had had 20.3%. Bill McSwain, the former head of the U.S. Attorney's Office in Philadelphia and a Trump appointee, was in third with 15.6%.

Mastriano was elected to the Pennsylvania State Senate in 2019 in a special election. His district includes parts of Adams, Cumberland, Franklin and York counties. He previously ran for Congress in 2018 in Pennsylvania's 13th Congressional District, but lost.

The Republican primary for Pennsylvania governor featured eight candidates vying for a chance to compete in November. That election will be a pivotal contest for political leadership in Pennsylvania as the state emerges from the COVID-19 pandemic.

Republican candidates campaigned ahead of Tuesday's primary to capture the support of an energized base that has voiced strong disapproval of two-term Democratic Gov. Tom Wolf.

Issues at the forefront in 2022 include Pennsylvania's ongoing pandemic recovery, the future of election law, the opioid epidemic, crime and gun laws, recreational marijuana, energy policy and the the emerging battleground fight over abortion in advance of the Supreme Court's ruling on Roe v. Wade.

The Republican primary field is the most crowded it has been in any race since at least 1978, leaving many voters undecided about which candidate to put on the ballot in November.

Four Republicans stood out in polls conducted during the weeks leading up to Tuesday's primary. State Sen. Doug Mastriano, a fiery Wolf critic and retired U.S. Army colonel, has heavily courted the political base of former President Donald Trump, who endorsed Mastriano over the weekend. Mastriano's far-right campaign, which has repeated unsubstantiated claims of voter fraud in the 2020 election, has created some concern among moderate Republicans who question whether Mastriano will alienate swing voters in November.

In campaign ads before Tuesday's election, Shapiro already had framed his bid for governor in opposition to Mastriano, signaling that he expects to win in what would be a highly partisan contest.

Pennsylvania voters have a recent history of alternating between Democratic and Republican leaders. Republicans have won back the office in every election when a term-limited Democrat is leaving since the state's constitution changed in 1968, allowing governors to serve two terms.

The edge Democrats have held over Republicans among registered voters in Pennsylvania has been trimmed from a margin of about a million people in 2012 to about 554,000 as of early May, according to Pennsylvania Department of State statistics. The GOP's base has been boosted in recent years by the populism of former President Donald Trump, whose presence looms large over primary elections in Pennsylvania and across the map in 2022.

Trump won Pennsylvania in the 2016 presidential election, but lost the state in 2020.

The state's continued political polarization since the last gubernatorial election, when Wolf defeated former state Sen. Scott Wagner in 2018, sets up a heated November race that will shape Pennsylvania's political identity and provide potential clues about the outlook of the 2024 presidential race.