McCormick, Oz locked in tight race; no winner yet in Pa. Republican primary for U.S. Senate 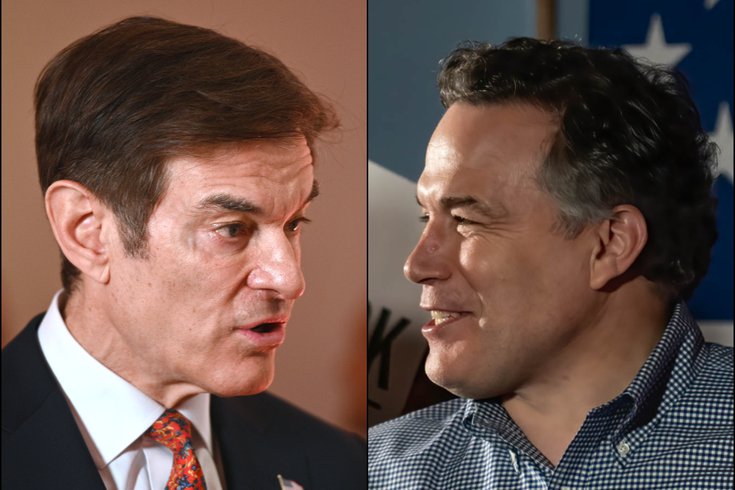 Former TV doctor Mehmet Oz, left, and former hedge fund CEO Dave McCormick are in a tight primary election race for the Republican nomination for U.S. Senate in Pennsylvania. Hours after the polls closed, the race remained too close to call.

Republican candidates for U.S. Senate, Dave McCormick and Mehmet Oz, were leading the pack in the primary election, but the race between them remains too close to determine a winner. The campaign for the seat being vacated by Sen. Pat Toomey could have major ramifications on the balance of power in the Senate.

LATEST: What happens if Oz, McCormick go to an automatic recount in Pa. Republican primary for U.S. Senate?

McCormick and Oz were within 3,000 votes of one another as of Wednesday morning, with 95% of the vote counted and results still being tallied, according to the Associated Press. Oz leads McCormick by 0.2%.

Pennsylvania has an automatic recount provision if a statewide election result finishes within 0.5%. Both candidates were considered the front-runners among the field of seven Republicans heading into Tuesday's primary. Results will be updated as they become available and all results are unofficial until certified by the state. The count could take several days to complete as remaining mail-in and absentee ballots are processed.

On Tuesday night, Pennsylvania Lt. Gov. John Fetterman locked up the Democratic nomination for November's U.S. Senate race with a commanding victory. The former mayor of Braddock suffered a stroke on Friday and underwent a procedure to implant a pacemakers with a defibrillator on Tuesday. He is expected to make a full recovery and will remain in the race.

The McCormick and Oz campaigns each said late Tuesday night that a call in the race was not imminent.

LATEST: As the Pennsylvania Republican Senate race tightens, David McCormick and Dr. Mehmet Oz both appeared to thank supporters at their respective election night parties but said their race would not be called Tuesday. https://t.co/ev2JtJTmzp

McCormick to supporters late tonight: “We’re not going to have a resolution tonight, but we can see the path ahead. We can see victory ahead.” pic.twitter.com/nz1FjMJirg

Republicans in Pennsylvania entered the primary fray from all sides with the approaching retirement of Sen. Pat Toomey. McCormick and Oz are each hoping to seize a political opportunity and preserve the GOP's representation of Pennsylvania in Washington, D.C.

Oz, the retired surgeon and former TV personality, got a boost in Tuesday's race from the key endorsement of former president Donald Trump.

McCormick, a former hedge fund CEO and U.S. Army veteran, kept pace with Oz in multiple polls by positioning himself as an 'America First' candidate further to the right. McCormick portrayed Oz as a moderate conservative and sought to connect with the more vigorous elements of Trump's base from recent Pennsylvania elections.

In the final weeks of the race, conservative political commentator and veteran Kathy Barnette also surged in polls as an outsider candidate with a strong grassroots base. Barnette faced tough questions about her past comments and participation in the Jan. 6 insurrection at the U.S. Capitol in 2021, drawing skepticism from former President Trump about her ability to compete with a Democrat in November.

McCormick, 56, was formerly an economic advisor in the presidential administration of George W. Bush. More recently, he served as the CEO of Bridgewater Associates, one of the world's largest hedge funds.

On the campaign trail, McCormick pitched himself as a "battle-tested and Pennsylvania true" candidate who can take on President Joe Biden and the Democrats. He hired two former Trump staffers, Stephen Miller and Hope Hicks, to join his campaign team in an effort to court the former president's voters.

Though McCormick lived in Connecticut while he worked at Bridgewater, he was born in Washington County, near Pittsburgh, and attended high school in Bloomsburg, Columbia County. attended West Point and served in the U.S. Army for five years, including a deployment in Iraq during the Gulf War in 1991.

For Oz, 61, the run for U.S. Senate marks his first foray into politics after three decades in medicine and nearly 20 years as a TV personality

Oz's entry into the Senate race last year also drew criticism about his ties to Pennsylvania. Besides earning his medical degree and a master's degree in business at the University of Pennsylvania, Oz has very few connections to the state. After having voted in New Jersey for three decades, Oz registered to vote at his wife's parents' home in Bryn Athyn, Montgomery County as a Republican in December 2020.

Pennsylvania's other U.S. Senate seat is held by Democrat Bob Casey, who took office in 2007 and will be up for reelection in 2024.

A total of 35 U.S. Senate seats are up for grabs in November. Among them, 15 seats held by Republicans and 13 occupied by Democrats running for reelection, in addition to the seats with open races.