2022 primary election results: Here are the key results from Tuesday

Pennsylvania is in the national spotlight with high-profile, statewide contested races for U.S. Senate and governor 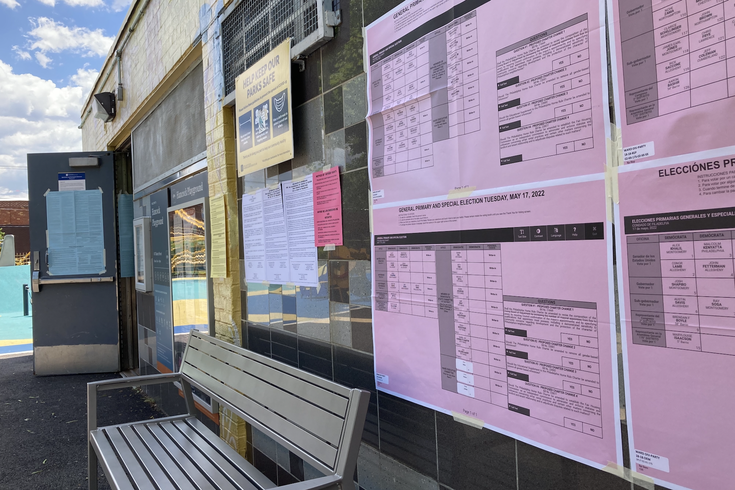 Tuesday's primary election in Pennsylvania featured much-watched races for U.S. Senate and governor. Above, sample ballots and other voting information is posted on the wall outside the polling location at Hancock Playground in Fishtown on Tuesday, May 17, 2022.

Tuesday was primary election day in Pennsylvania, and for Democrats and Republicans there were plenty of important choices to be made at the polls.

The race to fill the U.S. Senate seat being vacated by Republican Sen. Pat Toomey got national attention and attracted a field of four Democrats and seven Republicans vying for their parties' nominations in the November election – an election that could be pivotal in determining whether the Republicans or Democrats gain control of the Senate.

For the state's registered Republican voters, there also was crowded field of eight GOP candidates running in the primary for Pennsylvania governor. The winner Tuesday will run against Democrat Josh Shapiro, Pennsylvania's attorney general, in the fall. Shapiro ran unopposed in the primary.

Here is more on those races and other key primary election contests taking place Tuesday. For some of the races below, follow the links out to additional coverage. Results will updated as they become available.

Early Wednesday morning, Dave McCormick and Mehmet Oz, were leading the pack in the Republican primary for U.S. Senate, but the race between them still was too close to call. The campaign for the seat being vacated by Sen. Pat Toomey could have major ramifications on the balance of power in the Senate.

McCormick and Oz are within 1,200 votes of one another as of early Wednesday, with 95% of the vote counted and results still being tallied, the Associated Press reports. Oz leads McCormick by 0.2%, and Pennsylvania election law stipulates an automative recount when candidates in a statewide election finish within 0.5%.

Oz and McCormick candidates were the front-runners among the field of seven Republicans heading into Tuesday's primary. When the winner is determined, it sets up November's general election for the seat previously held by Republican Sen. Pat Toomey, who served two terms for Pennsylvania and announced in October 2020 that he would be taking a job in the private sector instead of seeking reelection this year.

Heading into the election, Oz, the retired physician and TV personality, was endorsed by former president Donald Trump. A former hedge fund CEO, McCormick was closed behind.

Just before 9 p.m. Tuesday in the Democratic primary for U.S. Senate, the Associated Press declared John Fetterman the winner of the four-person race. About 30 minutes later, Fetterman, Pennsylvania's current lieutenant governor, had received 58.6% of votes with 39% of the vote counted statewide. Connor Lamb had the next highest vote total, receiving 28.6%

November's election in Pennsylvania could change the partisan balance of the U.S. Senate, which is effectively even – 50 Republicans and 48 Democrats, plus two independent Senators who caucus with the Democrats. It also could offer hints about where the country is leaning in the run-up to the 2024 presidential election.

Fetterman led the field of four Democratic candidates going into Tuesday's primary election. Then on Sunday, his campaign announced he had suffered a stroke and been hospitalized in Lancaster County. Fetterman's campaign has said he is expected to make a full recovery.

In addition to Lamb, a member of the U.S. House and retired U.S. Marine who campaigned as a moderate, the other Democrats in running in the primary were State Rep. Malcolm Kenyatta, of Philadelphia, and Alexandria Khalil, a former small business owner and community organizer, who is on Jenkintown Borough Council.

Doug Mastriano is the Republican nominee for governor in Pennsylvania. With nearly 95% of the votes counted the state senator, who was endorsed by Donald Trump and, himself, has endorsed far-right conspiracy theories, including unsubstantiated claims of voter fraud in the 2020 presidential election, won by a significant margin over a crowded field of candidates.

Mastriano has received 44.6% compared to the second leading candidate, Lou Barletta, who had had 21.9%. Bill McSwain, the former head of the U.S. Attorney's Office in Philadelphia and a Trump appointee, was in third with 15.2%.

Mastriano was elected to the Pennsylvania State Senate in 2019 in a special election. His district includes parts of Adams, Cumberland, Franklin and York counties. He previously ran for Congress in 2018 in Pennsylvania's 13th Congressional District, but lost.

There were eight Republicans vying for the support of a base that has disapproved of Gov. Tom Wolf's response to the COVID-19 pandemic. In the days leading up to the primary, Jake Corman dropped out of the race an endorsed Lou Barletta, though Corman's name still appeared on the ballot.

Mastriano was the favorite heading into Tuesday's primary. In November, he will run against Democrat Josh Shapiro, who ran uncontested in the Democratic primary for Pennsylvania governor.

In Pennsylvania, the candidates for lieutenant governor run in separate primary elections from the candidates for governor. So the winners of the Republican and Democratic primaries for governor – in this instance, Doug Mastriano and Josh Shapiro – have no control  over who their running mates will be in November, beyond making an endorsement and hoping their supports follow suit at the polls.

Shapiro's got his choice – Austin Davis, a state representative from McKeesport won the Democratic primary with 58.5% of the vote, to 23% for state Rep. Brian Sims and Ray Sosa, a banker and insurance agent who ran for the same office in 2018. Sims, currently the state representative in the 182nd District, covering parts of Center City and South Philly, did not run for reelection to the state assembly.

Mastriano had given a nod to Teddy Daniels, an anti-establishment candidate with far-right ideologies like Mastriano's own. In the nine-candidate Republican primary, Daniels finished two spots behind presumptive winner Carrie Lewis DelRosso who received 24.3% of the vote. Daniels got 11.6 percent of votes.

Davis and DelRosso both are from Allegheny County.