The Republican, who was highly critical of the state's COVID-19 restrictions, has pledged to restore an entrepreneurial spirit by keeping taxes low and reducing regulations 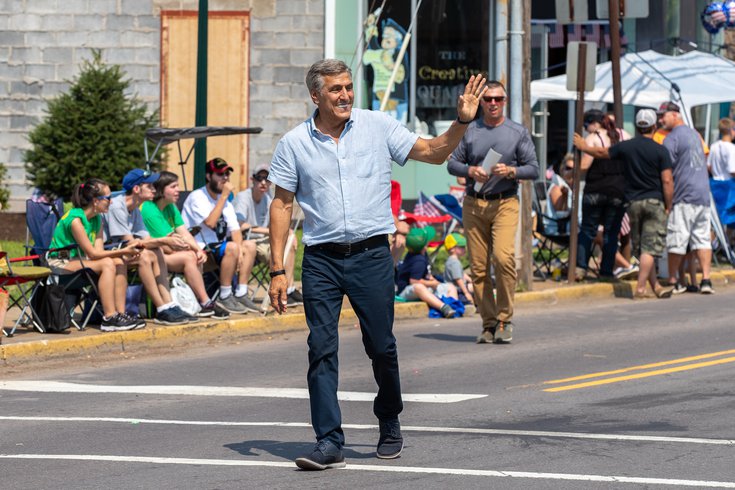 Republican Lou Barletta, a former U.S. Congressman and mayor of Hazleton, has said he is running for Pennsylvania governor to 'take back' the state from Gov. Tom Wolf. Barletta opposed Wolf's COVID-19 restrictions.

Lou Barletta is counting on his two decades of political experience and conservative stances to resonate with Republican voters in Tuesday's Pennsylvania gubernatorial primary.

Barletta, 66, spent 10 years serving as a Congressman until he unsuccessfully challenged U.S. Sen. Bob Casey in 2018. He previously had spent a decade as mayor of Hazleton, where he once owned a profitable pavement marking company.

Now, Barletta is running for governor in an effort to "take back" the state from Gov. Tom Wolf and other "elites" in Harrisburg. His decision to run was based primarily on Wolf's COVID-19 response, which he has criticized for decimating the state's businesses and schools.

He has pledged to restore an entrepreneurial spirit in Pennsylvania by keeping business taxes low and reducing regulations to incentivize residents to create private businesses. In a campaign video, Barletta took aim at Democratic policies aimed at transitioning to clean energy. He supports continuing the production of coal, oil and natural gas as a way to promote quality union jobs throughout the state.

As mayor of Hazleton, Barletta helped pass a 2006 ordinance that banned landlords from renting properties to undocumented immigrants. Hazleton was subsequently sued by the state's ACLU chapter and the ordinance was deemed unconstitutional.

Barletta also opposes abortion in most cases and supports defunding Planned Parenthood. During his time in Congress, he received a 100% rating from the National Right to Life Committee.

In an April debate, Barletta said he would sign any anti-abortion rights legislation that comes across his desk as governor, but would make exceptions for rape, incest and danger to the life of the pregnant person. He said doctors who perform abortions in a post-Roe v. Wade world should be held criminally liable, but said pregnant people seeking abortions should receive counseling rather than face prosecution.

He responded to the leaked Supreme Court draft opinion that would overturn the landmark ruling by saying it would be "an enormous, life-saving victory for unborn children."

Born and raised in Hazleton by two public school teachers, Barletta supports efforts to improve the quality of public education in the state. He also supports school choice.

In January, Barletta signed the "1776 Pledge to Save Our Schools," which was formed to promote patriotic education after President Joe Biden abolished Trump's "1776 Commission," which sought to counter histories that depict the Founding Fathers as  egalitarians who protected slavery.

"All across Pennsylvania, parents are sick and tired of their tax dollars being used to fund anti-American indoctrination campaigns in K-12 classrooms that teach children to hate their own country and each other through racist ideologies like critical race theory," Barletta said after signing the pledge.

In October, Barletta wrote an editorial for Broad and Liberty about efforts by Philadelphia residents to remove the Christopher Columbus statue from Marconi Plaza. He lauded Columbus as an Italian-American hero and called him an "indelible" part of history.

An early supporter of Trump's 2016 campaign for president, Barletta is among those who have promoted the former president's false allegations of widespread voter fraud in the 2020 general election. Barletta said that as governor, he would support efforts to "restore public trust" in the state's election process.

Barletta also supports funding for pre-disaster infrastructure as a way to reduce spending on post-disaster repairs, like the level seen following Hurricane Ida in 2021.