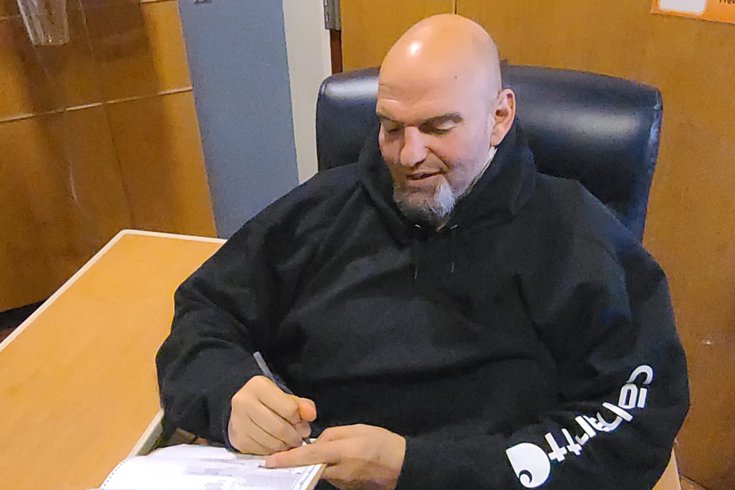 John Fetterman won the Democratic primary for the U.S. Senate in Pennsylvania. Days before the primary election, Fetterman was hospitalized after having a stroke. He is shown above casting an absentee ballot while still hospitalized in Lancaster, where he had a pacemaker implanted on Tuesday.

Pennsylvania Lt. Gov. John Fetterman has won the Democratic primary for the U.S. Senate, earning the party's nomination in what will be one of the most closely watched races in the country in November. The victory comes as Fetterman continues to recover from a medical procedure on Tuesday following a stroke he suffered last Friday.

The Associated Press predicted Fetterman would win the nomination shortly before 9 p.m. All results are unofficial until certified by the state. He will run against the winner of the Republican primary, which was still too close to call early Wednesday morning. Mehmet Oz and Dave McCormick are separated by 0.2% of the vote with 95% of votes counted, ahead of large field of GOP candidates.

Fetterman was the clear Democratic front-runner by a wide margin in polls ahead of Tuesday's primary. He revealed over the weekend that he had suffered a stroke last Friday and expects to make a full recovery. The former mayor of Braddock underwent a successful procedure to implant a pacemaker with a defibrillator on Tuesday, a step that he says will prevent further health complications.

After a previous run for U.S. Senate in 2016, Fetterman has cultivated a large grassroots network and emerged as an outsider candidate with a strong progressive base and the ability to appeal to Pennsylvania voters across party lines. He has campaigned to improve the nation's health care system, reduce inequality by supporting U.S. workers, expand affordable housing and legalize recreational marijuana, an issue he has championed as Pennsylvania's lieutenant governor.

PA — THANK YOU FOR CHOOSING ME AS YOUR DEMOCRATIC NOMINEE FOR U.S. SENATE IN PENNSYLVANIA!!!!!!!! 😭😭

Democrats have a rare opportunity to pounce in a November election that will have major ramifications for party control in Washington, D.C. Pennsylvania's other Senate seat is held by Democrat Bob Casey, who took office in 2007 and is up for reelection in 2024.

Fetterman will face a tough Republican challenge in November as the party looks to retain the seat left open by Toomey's retirement. His progressive profile and health concerns figure to play a role in how his Republican opponent frames the decision put before Pennsylvania voters.

A total of 35 Senate seats are up for grabs in November. Among them, 15 seats held by Republicans and 13 occupied by Democrats running for reelection, in addition to the seats with open races.