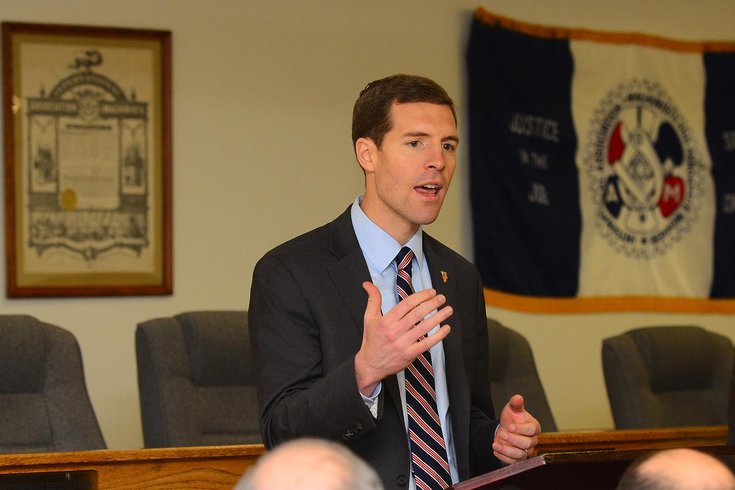 U.S. Rep. Conor Lamb is seeking the Democratic nomination for the open U.S. Senate seat in Pennsylvania. He has served in Congress since winning a special election in 2018.

U.S. Rep. Conor Lamb is seeking a promotion to the U.S. Senate after four years in Washington.

In his short political career, Lamb has forged a reputation as a moderate Democrat who reliably votes in line with the Biden administration's position. He is one of four candidates seeking the Democratic nomination for the open U.S. Senate seat in Pennsylvania. The primary is Tuesday.

Lamb, 37, of Allegheny County, doesn't support a single-payer health care system and has rebuffed the progressive wing of his party's messaging on defunding the police. He acknowledges the long-term risks of climate change, but he also regards natural gas – a key element of Western Pennsylvania's economy – as an important "bridge fuel" and wants the U.S. to export more of it.

But there are some areas where Lamb aligns with progressives. He supports labor unions and abortion rights, though he personally opposes abortion as a practicing Catholic. He has also pushed for campaign finance reforms, including legislation that would reverse impacts of the U.S. Supreme Court's Citizens United decision, which allowed secret donors to influence campaigns.

Lamb was born in Washington, D.C. and raised in Mt. Lebanon, a suburb south of Pittsburgh. At the University of Pennsylvania, he earned a bachelor's degree in political science in 2006 and a law degree in 2009. He then enlisted in the U.S. Marine Corps and serves a major in the Marine Corps Reserves.

Lamb is the vice chair of the House's Committee on Veteran Affairs. He has touted the bipartisan legislation he's helped passed to benefit veterans, including a bill to improve suicide prevention efforts within the Department of Veterans Affairs.

After his military service, Lamb was an assistant U.S. attorney in the Department of Justice's Pittsburgh office until he won a special election in 2018 to replace former Rep. Tim Murphy, a Republican who resigned after he had an extra-marital affair and asked his mistress to get an abortion.

Lamb's district was redrawn before the 2018 general election in a way that helped him hold onto the seat, which he won again in 2020.

Lamb's late grandfather, Thomas Lamb, was the Democratic majority leader in the Pennsylvania Senate and also served in the state House of Representatives. His father, Thomas Lamb Jr., is a lobbyist and senior executive for PNC Bank.