As a prosecutor, the Republican fought the opening of a safe injection site and blamed Philadelphia District Attorney Larry Krasner for a rise in violent crime 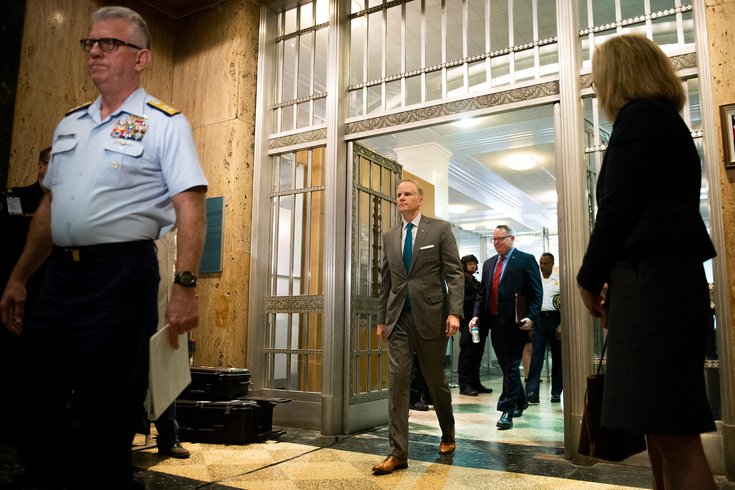 Bill McSwain, former U.S. Attorney for the Eastern District of Pennsylvania, is running for governor in the state as a conservative outsider and law and order candidate.

Bill McSwain has sought to distinguish himself amid the crowded Republican field for Pennsylvania governor ahead of Tuesday's primary election by emphasizing his experience as a top prosecutor.

As the U.S. attorney for the Eastern District of Pennsylvania from 2018 to early 2021, McSwain, 53, argued against the opening of Safehouse, a proposed supervised injection site in Philadelphia, and was a public opponent of District Attorney Larry Krasner, sparring over Philadelphia's status as a sanctuary city.

A Donald Trump appointee, McSwain lauded the prosecution of rioters and looters who participated in the civil unrest that followed the police killing of George Floyd in 2020. He argued that anti-police rhetoric has led to the increase in violent crime in Philadelphia, blaming Krasner for "a culture of lawlessness."

After McSwain left the U.S. Attorney's Office, he claimed to Trump in a letter that he was blocked from pursuing allegations of voter fraud in Philadelphia during the 2020 election. He noted that he prosecuted allegations of ballot-stuffing as the U.S. Attorney, and would support voter ID laws and oppose ballot-harvesting as governor.

On the campaign trail, McSwain has billed himself as a political outsider who will restore law and order. He has pledged to cut the state's gas tax and fix governmental spending.

A school choice supporter, McSwain has made eduction reform a critical part of his platform. He has pledged to ban the teaching of critical race theory in public schools, though it hasn't been used in any curriculum in the state, and would support a parents' bill of rights that includes the right to curriculum transparency.

In March, he accused a West Chester middle school of "leftist political indoctrination" after seeing a sign advertising the school's Gender-Sexuality Alliance.

During a debate in April, McSwain said he would sign anti-abortion rights legislation, though he supports exceptions for rape, incest and life-threatening circumstances. He said that the decision of whether to hold doctors or abortion seekers criminally liable would depend on how the law is written.

McSwain responded to the leaked Supreme Court draft opinion that would overturn Roe v. Wade, by saying it is the correct decision. He added that the leak itself was an "outrageous attack on the Court."

Born in West Chester, Pennsylvania, McSwain attended Yale University, where he graduated in 1991 before joining the Marine Corps as an infantry officer. He served through 1997 before attending Harvard Law School.

McSwain served as an assistant U.S. attorney from 2003 to 2006 before he joined a Center City law firm that primarily handled white collar defense cases.

McSwain has lauded his work to preserve the Ten Commandments plaque at the Chester County Courthouse, which was the subject of a First Amendment lawsuit in 2001. An appeals court ruled that it could remain at the courthouse due to its historical value.

In 2014, McSwain helped represent Magisterial Judge Mark Bruno, of West Chester, who had been charged with conspiracy and fraud for allegedly participating in a ticket-fixing prosecution in Philadelphia. He delivered the closing argument in the trial; Bruno was acquitted.