At the 2018 NFL Combine, Doug Pederson proudly wore his Philadelphia Eagles Super Bowl LII Champions gear, and the NFL blared background music whenever – and wherever – he walked (or rather, strutted), like he was John Travolta in Saturday Night Fever.

OK, maybe the background music thing didn't happen, but unquestionably, Pederson, or any other coach for that matter, is more respected by his peers after winning it all.

“Oh yeah, you’re viewed differently," Pederson acknowledged at the NFL Owners Meetings in Orlando last week. "Everybody is very complimentary. I think there were a lot of people pulling for us to win. You’re looked at, now, you’re a Super Bowl champion. As crazy as that sounds, it’s still hard to fathom. It’s hard to kind of put in perspective."

While appreciative of his NFL well-wishing peers, Pederson's favorite form of congratulations came via Moorestown, NJ, his residence, who honored him by naming February 24th "Doug Pederson Day."

Mayor Stacey Jordan estimated that a couple thousand people showed up for 'Doug Pederson Day,' a carnival-like atmosphere with tents, face-painting, and music.

"It was a Norman Rockwellian type of day," Jordan said. "The whole town coming out and celebrating was just – it’s hard to explain – just all the kids and the adults, and everybody was just in such an amazing mood.

"I starting thinking about it after the Eagles' Super Bowl win, and was able to get in touch with Doug's wife, Jeannie. She and I were in a Bible study class together, so that's how I knew her. I sent her a text saying that we'd like to do something for Doug and you for winning the Super Bowl, and she was funny. She was like, 'We're getting a parade in Philly on Thursday, we're good.'

"They're very humble people, genuinely down to earth. She said 'We don't need anything,' to which Jordan replied, 'It's not for you, it's for the town. The town wants to celebrate you guys.'" 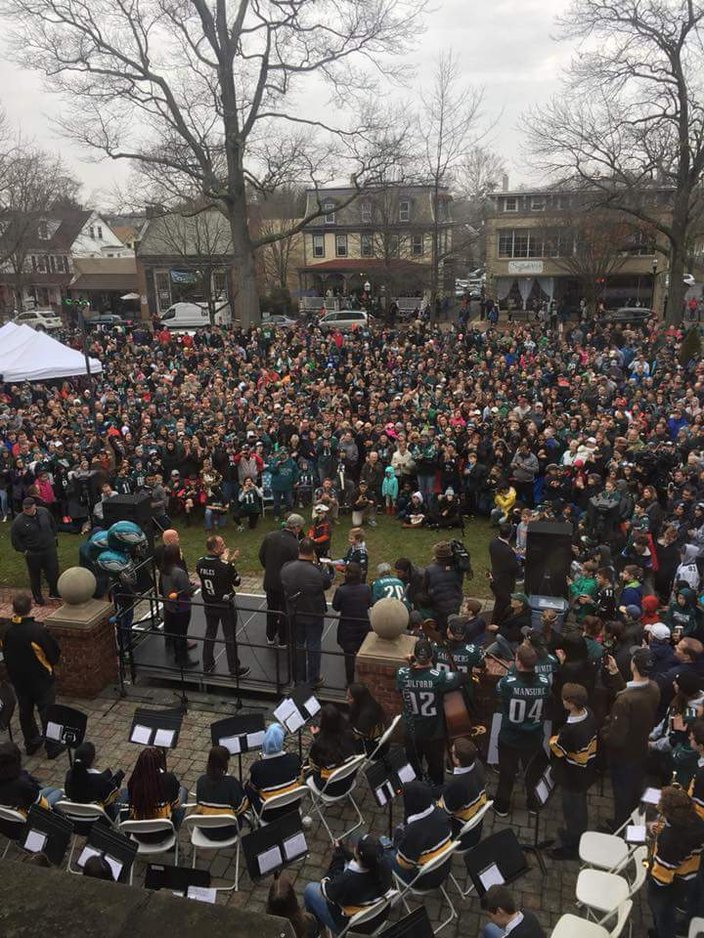 A look at 'Doug Pederson Day.'

"You get congratulation text messages, phone calls, all that," said Pederson. "But that deal in Moorestown, to put that all together — the proclamation, ‘Doug Pederson Day, February 24th’ — which you are all invited to — that was pretty cool to have that. My hometown, they did the same thing. They sent a nice little proclamation. That was pretty cool. It was pretty special.”

Jordan said that Pederson stayed for over an hour and a half after the event to sign autographs for fans.

"A week later, our boys basketball team was in the state semifinals, and he shows up at the basketball game," said Jordan. "They're just really good people who are part of our town."

So what happens on Doug Pederson day going forward?

The best suggestion is for Pederson to win another Super Bowl, as Jordan pointed out that Moorestown's proclamations are not recurring.

Well played, Moorestown. Whatever it takes to keep Pederson motivated to repeat.