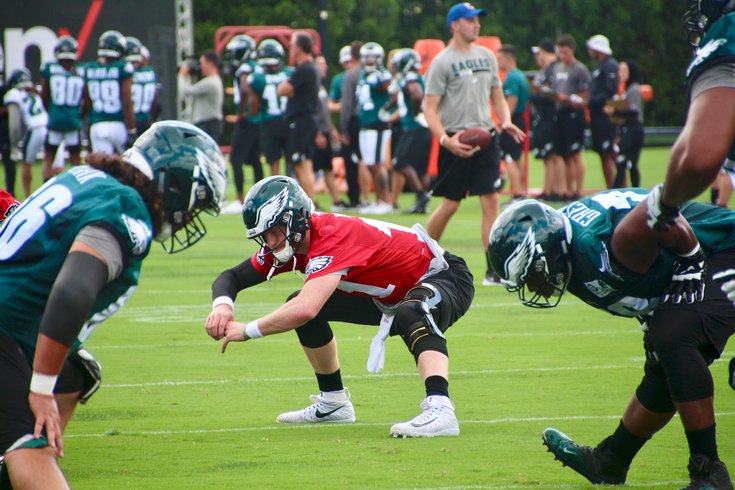 Eagles quarterback Carson Wentz stretches on the field at the NovaCare Complex during the first day of training camp practices.

For the first time since Eagles training camp opened on Thursday, Carson Wentz wasn't a full participant in practice. After taking part in 11-on-11 drills this week, something that came as somewhat of a surprise to many, the third-year quarterback and his surgically-repaired left knee was given some well-deserved rest as the team continues to manage his workload.

As we wrote on Saturday, Wentz has looked great so far this summer, especially considering he tore his ACL and LCL back in December. His progress seemed to be going so well that Doug Pederson even felt comfortable taking a break from his cup of Rita's — I can't believe he wasn't eating ice cream instead — to ask Mike Groh a Wentz question during the offensive coordinator's first press conference of camp.

Of course, Groh deferred to the head coach, much like he did when asked about the plans for their quarterback during the rest of the preseason. And with Wentz absent from 11-on-11's on Sunday, Pederson was quick to call any potential fears by clarifying that the rest has always been part of the plan.

"It's just the plan that we have," Pederson told reporters following practice. "I'm not going to divulge the plan, but there is a plan. There is a progression. There are steps that we're going to take with him, and this is all part of that progression."

Here's more from Pederson's presser, including how their using GPS technology to monitor the recovery of Wentz (and others).

You said there is a plan in place for Carson's workload, I know. But he is the starting quarterback. How much does that plan change based on how he handles the increase and decrease out here?

DOUG PEDERSON: Well, it's not a daily thing, it's a weekly thing, as we progress. So we've just got to make sure we've got a certain pitch count we want to keep him to each and every day. And then we're going to -- as camp goes on and rolls on, we'll ramp that up. It's also based on, too, he's getting a lot of extra work with his rehab on the side too, when he's between meetings and things like that. All of that is part of his progression. So that's why we've got to be careful that we're not pushing too early for his health. Does that make sense?

For Carson and all the injured guys, is there a player tracking technology? I know you guys have it but does it play into decision-making?

Yeah, the little things on their shoulders, the GPS and all that, we can track yardage and output and things like that. So, yeah we use that. We use that with all the guys. Even some of the injured guys, we spend some time sort of deciphering that, and that's why these plans we talk about, that's all part of it. It's all part of his volume each and every day, each and every week.

Does that create a baseline for where you would say, ‘Alright, this is what we expect him to be when he’s healthy. This is what we know he can do.’

Yeah, because we can go back and look at his numbers from last year when he was healthy and say, ‘This is what we've got to get to.’ Those are all things -- that's why that plan is in place. We've got to get back to there. It's a good plan, and we're going to stick with it. Again, I also want to see how he feels at the end of the day as we go.

We don't see the medical records, obviously, like you do. If you just come out here with a naked eye and not know he was injured, it looks like Wentz looked this time last year. Is that a fair assessment?

I think if you didn't know he had the injury or had the brace on his leg, you'd probably assess that everything was good, yeah.

Hey, where have I heard that before?