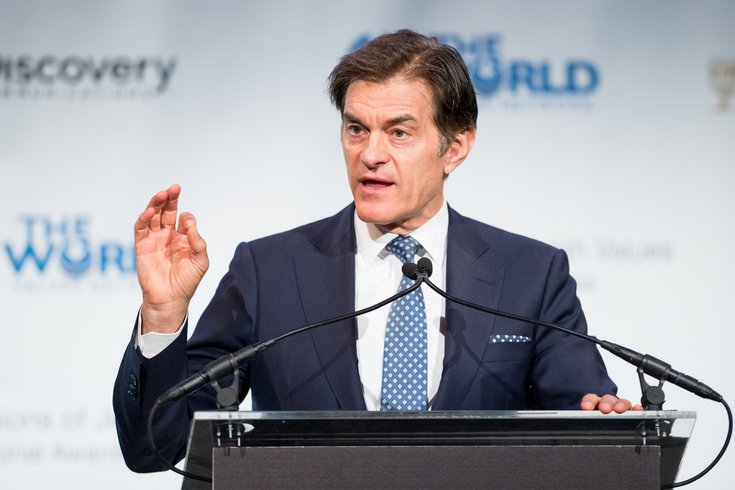 Mehmet Oz is running for the U.S. Senate as a Republican in Pennsylvania in 2022. The physician's Emmy Award-winning daytime TV program, the 'Dr. Oz Show,' will be canceled early next year and replaced by 'The Good Dish,' a show hosted by Oz's daughter, Daphne.

After 12 years, Sony Pictures announced Monday that it will cancel its long-running "Dr. Oz Show" as daytime TV host Mehmet Oz runs for a U.S. Senate seat in Pennsylvania.

The syndicated show will air its final episode on Jan. 14 and will be replaced by "The Good Dish," a spinoff from Oz's daughter, Daphne, that will debut on Jan. 17.

Oz, 61, announced last month that he will run for the U.S. Senate in Pennsylvania as a Republican to replace outgoing GOP Sen. Pat Toomey in 2022. The election is shaping up to be one of the most competitive Senate races next fall and could help determine which party ends up in the majority.

Sony Pictures did not attribute its decision to cancel Oz's show to his Senate candidacy. The show, currently in its 13th season, had previously been renewed for two more seasons in September 2020.

Oz lived in New Jersey for two decades, but had registered to vote at his in-laws' Pennsylvania address earlier this year in order to set up his Senate run. He has entered a crowded field of Republican candidates including real estate developer Sean Bartos, political commentator Kathy Barnette and U.S. ambassador to Denmark Carla Sands. Sean Parnell, who had been endorsed by former President Donald Trump, dropped out of the race in November after his estranged wife accused him of abuse.

A cardiothoracic surgeon who received his medical degree from the University of Pennsylvania, Oz has a history of making dubious medical claims. He recently lashed out at the "liberal media," including the Philadelphia Inquirer, for deciding to refer to him as Mehmet Oz instead of Dr. Oz when covering his Senate campaign.

In television appearances and early campaign videos, Oz has accused his opponents of attempting to "cancel" him and has positioned himself as a conservative with messaging similar to former President Trump.

"Pennsylvania needs a conservative who will put America first, one who can reignite our divine spark, bravely fight for freedom, and tell it like it is," Oz said when he announced his campaign in late November.

Democrats have a tenuous grip on majority control in the Senate heading into the 2022 mid-terms. They hold 48 seats along with two independents who caucus with Democrats and a tie-breaking vote from Vice President Kamala Harris.